The respiratory tract starts from the external nares. These are a pair of small oval apertures on the snout slightly above the mouth. On its inner side each naris possesses a prominent swelling of mucous membrane which serves as a valve to close the aperture during burrowing. The external nares lead into small sacs, the nasal chambers or olfactory sacs, lying in the skull.

The nasal chambers open posteriorly by a pair of small apertures, the internal nares, into the anterior part of a spacious buccopharyngeal cavity. On the floor of buccopharyngeal cavity between the basal bifurcations of the tongue lies a small median longitudinal slit called the glottis which leads into a short median chamber called larynx.

The larynx is provided with two pairs of muscles- the inner musculus compressor laryngis which serves as a sphincter of the glottis and the outer musculus dilator laryngis which serves as a dilator of glottis. The larynx leads posteriorly into the trachea; which is an elongated cylindrical tube running backwards through the neck ventral to oesophagus. 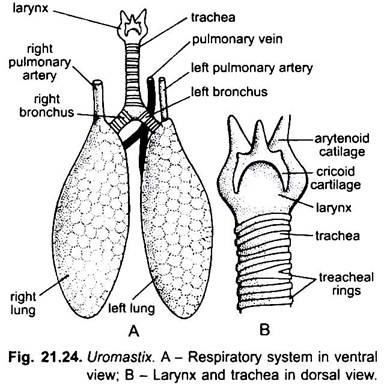 The respiratory organs of Uromastix are a pair of lungs. They are situated one on either side of the heart in the thoracic cavity. Both the lungs are symmetrical in shape and size. They are elongated, fusiform, thin-walled elastic hollow sacs of orange colour. The posterior ends of lungs appear pointed when they are empty but rounded when they are inflated.

The inner lining of the lungs is raised into a network of low ridges which enclose shallow depressions or alveoli. The cavity of the lung is continuous. These ridges are more numerous and closer in the anterior part of the lung than in the posterior part. The ridges increase the respiratory surface of lungs. The walls of the lungs and alveoli have a rich supply of blood-capillaries.