Unlike frogs, lizards have no auxiliary means of respiration. Lungs of Garden Lizard (Calotes) are little more elaborate than those of anurans.

The respiratory organs include a pair of external nares, nasal chambers, internal nares, glottis, larynx, trachea, bronchi and lungs. The external nares lie a little in front of eyes. They lead into nasal passages or chambers, which open into the roof of the buccal cavity. The glottis is located behind the tongue and it opens posteriorly into a short chamber, the larynx.

It is less prominently developed than in many of the Amphibia. Its walls are supported by a cricoid and a pair of arytenoid cartilages. The larynx opens into a narrow, elongated cylindrical tube, the trachea. Its wall is supported by a large number of small cartilaginous rings, the tracheal rings. The trachea is bifurcated into two narrow tubes in the thorax, the bronchi. Each bronchus enters into a lung.

The lungs are elastic, elongated sacs, the right lung is slightly larger than the left one. The walls of the lungs are folded into ridges giving the appearance of a honeycomb. These ridges are much closer and more numerous towards the anterior end than towards the posterior end of the lung. 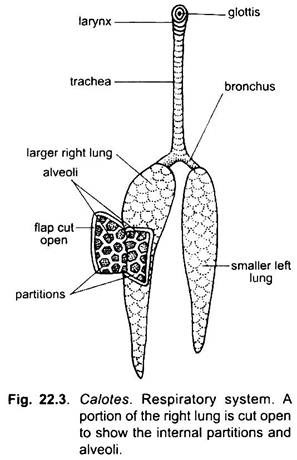 In most reptiles including the garden lizard (Calotes) the pleural and peritoneal cavities communicate. The respiratory movements are performed by the intercostal muscles attached to the ribs. Inspiration is caused by the movement of intercostal muscles, raising the ribs that increases the volume of the thorax and reduces the lung pressure causing the inflow of air into the lung.

Oxygen of the air enters the blood of the blood capillaries and CO2 of the blood enters the alveoli. Expiration is done by lowering the ribs that decreases the volume of the thoracic cavity, flows back to the exterior.