The digestive system of Garden Lizard (Calotes) is formed of the alimentary canal and digestive glands.

The alimentary canal is a convoluted tube beginning from mouth and ends in a cloaca.

It is a wide transverse slit bounded by the upper and lower jaws, bearing teeth. Teeth are small, conical and similar (homodont), and directed backward. They are attached with the inner lateral sides of jaw bones. Such type of attachment of teeth is called pleurodont. They are adapted to catching and holding and not for chewing.

Mouth leads into a large and dorsoventrally compressed buccal cavity. In its roof open two small openings of internal nares and on its floor is present a narrow, elongated and fleshy protrusible tongue which is bifid in front.

It is the posterior part of the buccal cavity. At the back of the tongue is present the glottis. In the pharynx are also present a pair of lateral openings of eustachian tubes and a posterior wide opening the gullet, leading to oesophagus. 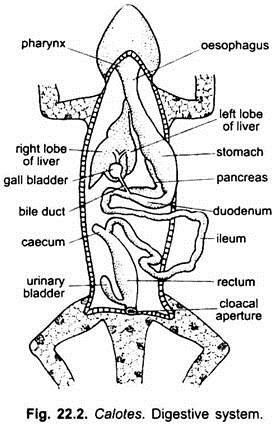 It is a straight, narrow tube passing through the neck dorsal to trachea and opens into stomach.

It is a muscular, cylindrical tube, which, though expansible, is little wider than the oesophagus. The stomach is not quite distinct into cardiac and pyloric portion. The posterior pyloric stomach leads into small intestine through pyloric sphincter.

It is small, sac-like, thick-walled tube, opening into cloaca by a sphinctered anus. The colon is absent.

The cloaca is linearly subdivided into coprodaeum, urodaeum and proctodaeum. The last part opens externally through a sphinctered cloacal aperture.

Digestive glands include mucous and salivary glands, gastric glands, liver, pancreas and intestinal glands. In the buccal cavity are present few unicellular mucous and salivary glands. The liver is a large, bilobed, brownish gland and placed on the dorsal side of stomach, behind the heart. The gall bladder is a small, rounded sac lying in a cleft at the lower margin of the right liver lobe. It acts as a reservoir for bile secreted by the liver cells.

The bile duct from the gall bladder opens into the upper part of duodenum. Pancreas is a whitish elongated structure situated in between the stomach and duodenum. It opens into the duodenum by a separate pancreatic duct. It secretes the pancreatic juice which is alkaline in nature and contains three enzymes, trypsin, amylopsin and lipase. The unicellular gastric glands are present in the inner wall of stomach which secretes gastric juice containing digestive enzyme pepsin. Besides this, unicellular parietal glands are also present in its wall that secretes hydrochloric acid.

The Garden Lizard (Calotes) mainly feeds on small living insects. It catches its prey with the help of sticky tongue and taken in the buccal cavity.

Digestion occurs in the stomach where HCl and pepsin react on the food. HCl makes the medium acidic and kills the bacteria, while pepsin reacts with the food protein and breaks it into peptones and proteases. Later on partly digested food (chyme) enters the duodenum where bile from gall bladder neutralises the acidic chyme and emulsifies the fat portion of the food. In the duodenum also, the alkaline pancreatic juice reacts with the protein, carbohydrate and fat parts of the chyme.