The digestive system of Calotes is com­posed of the alimentary canal and digestive glands (Fig. 1.94 A): 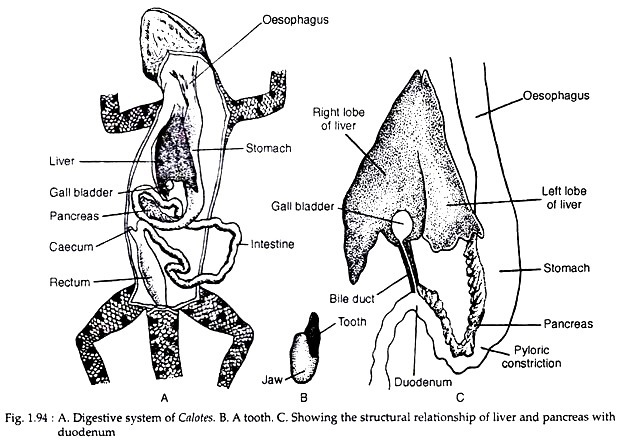 The alimentary canal starts from the mouth. Mouth is a transverse terminal aperture provided with jaws. The jaws are provided with teeth. The teeth are sharp, small, pointed and recurved back­wards. They are actually simple cones (haplodont) having an enamel cap and an interior ortho-dentine.

The ortho-dentine encloses a large pulp cavity. The style of attachment of teeth is identified as pleurodont, i.e., the teeth are lodged the outer wall of the alveolar groove. (Fig. 1.94B). All the teeth are similar in size and shape, i.e., they are of homodont type. But the teeth differ markedly in size in different regions of the jaws.

The mouth leads into the buccal cavity which is large and com­pressed dorsoventrally. At the posterior part of the roof of buccal cavity, there are two openings for the internal nares. The floor of the cavity houses a median and muscular tongue. The tongue is protrusible and the apex of the tongue is slightly bifurcated. The buccal cavity passes to the stomach through pharynx and oesophagus.

The stomach is elongated, sac-like and placed more or less vertically. The stomach is divisible into a cardiac and a pyloric portion. The pyloric part of the stomach is followed by small intestine which is narrow tubular and coiled.

At the junction of ileum and rectum a small projection called coelic caecum is pre­sent. Colon is absent. Cloaca opens to the exterior by the anus (or vent). The whole of the alimentary canal is kept in position by folds of peritoneum. The stomach is attached with the body wall by the mesogaster, the ileum by the mesentery and the rectum by the mesorectum.

Small unicellular sali­vary and mucous glands are present in the buccal cavity. These glands are few in number. The most important of the digestive glands is the liver, which is massive and situated dorsal to the stomach. The liver is divided into left and right lobes. Both the lobes are united ante­riorly (Fig. 1.94C).

The inner wall of the stomach is beset with a large number of unicellular parietal glands and gastric glands which secrete hydrochloric acid and digestive enzymes, respectively.

Another important digestive gland is the pancreas. It is a flat and elongated structure. It is whitish in colour. It opens into the beginning of the duodenum. The secretion of pancreas is called pancreatic juice. It is alkaline in nature and contains digestive enzymes. These enzymes are trypsin, amylopsin and lipase.

Spleen is a small rounded glandular structure situated in the mesentery below the stomach. It is mor­phologically connected with the digestive tract, but has got no digestive role. The spleen stores the erythrocytes and also destroys them, when necessary.

Mechanism of food-getting and digestion:

The food of Calotes consists mainly of small living insects. Ingestion is done with the help of the tip of the tongue and the insect is taken inside alive. The sticky mucous secretion helps to catch the prey. In the stomach HCl and pepsin react on the food matter.

HCl makes the medium acidic and kills bacteria while pepsin reacts with the protein part of the food and breaks it into peptone and proteoses. In the duodenum, bile neutralizes the acidic half-digested chyme and emulsifies the fat part of the food. Now pancreatic juice comes into play.

Being alka­line in nature it makes the medium strongly alkaline. Digestive enzyme trypsin (present in pancreatic juice) react with protein and pro­teoses and convert them into soluble amino acids. Amylase reacts with carbohydrate and transforms into glucose. Lipase reacts on fat converting it to fatty acid and glycerol.