In this article we will discuss about the circulatory system of calotes.

Transportation of various substances within an organism is conducted by the circu­latory system. The circulatory system consists of cardiovascular system and lymphatic system.

(a) Structure of Heart:

The heart of Calotes lies in the pleuroperitoneal cavity. The heart is covered by a thin and transparent pericardial membrane. The space between the heart and pericardium is filled with pericardial fluid. The heart is triangular in shape.

The auri­cular region is wider than the ventricular region (Fig. 1.95A). The sinus venosus is reduced and is disposed transversely and dorsal to the lower half of the auricles. It is thin-walled and is formed by the confluence of the venae cavae.

The pulmonary aperture is circular in outline and is located on its dorsal wall close to the inter-auricular septum. The aperture is not provided with valves.

Internally, the left and right auricles are separated by a thin, muscular and non-perfo­rated inter-auricular septum. The septum extends posteriorly for a short distance with­in the ventricle and bears at its posterior tip the auriculoventricular valves.

The ventricle is muscular, spongy and triangular in appearance. Its apex is directed caudally and bears a thin and white cord of tissue called gubernaculum cordis. It pene­trates the pericardium and reaches the upper margin of liver. The thick-walled ventricle (Fig. 1.95C) is provided internally with an inter-ventricular septum which divides it incompletely into left and right halves.

The inner cavity of the ventricle has been arbi­trarily divided into two regions, namely, cavum pulmonale situated in the right side, cavum arteriosum (on the left hand portion) by a muscular ridge. The ridge arises from the right ventral wall of the ventricle and runs to the dorsal side obliquely. Higher up, it becomes horizontally inclined.

It then runs obliquely again and takes a vertical course. It cuts off the aforesaid cavities. The left and right auriculoventricular apertures lie very close together being separated by the pro­longation of the inter-auricular septum. The free lateral edge of the septum bears the auriculoventricular valves.

In the middle of the ventricle and close to the line of demar­cation between the auricles and ventricle, there are three apertures from which the aor­tic arches arise. The inner wall of the ventri­cle is provided with thick interlacing mus­cles called columnae carnae. There are bunches of thread-like muscle fibres called chordae tendineae by which the valves remain attached to the columnae carnae (not shown in the figure).

The different compartments of the heart are intercommunicated by apertures having swing door-like flaps called the valves. These valves control the passage of blood and direct the flow in one direction.

The valves present in the heart of Calotes are:

(a) A pair of leaf-like valves in the sinuauricular aper­ture.

(b) Sphincter muscle acting as valve in the opening of pulmonary vein into the left auricle,

(c) A pair of leaf-like valves formed by the bifurcation of the inter-auricular septum in the auriculo-ventricular aperture,

(d) Three semilunar valves in each orifice from which the arterial arches arise.

The walls of the heart are provided with three histological layers common to all blood vessels, i.e., tunica intima, tunica media and tunica adventitia from inner to the outside. Of these three layers, the tunica media is peculiar in having specialised cardiac mus­cles showing striations and branchings. The heart is supplied with the cardiac branch of 10th cranial nerve.

Mechanism of circulation through heart:

The ventricle sends blood for circulation into the different parts of the body through the systemic and pulmonary arches. The entry and exit of blood in the ventricle are so beautifully arranged that a major quantity of oxygenated blood is always forwarded to the brain region.

(2) Two systemic aortae, right and left (Fig. 1.96). These three aortae are wound around themselves at the source and under­go about one and half turns round each other. The aortae are covered at the base by a fibrous sheath and thus appear tubular.

It arises independently from the right portion of the ventricle and soon splits into two branches, each entering into a lung. It carries deoxygenated blood.

This aorta originates independently from the right (left to pul­monary aorta) portion of the ventricle and moves forward for some distance. Then it curves round the heart and goes downwards to meet the right systemic aorta a little poste­rior to the apex of ventricle. It carries mostly the oxygenated blood.

This important aorta emerges independently from the right ven­tral margin of the base of the ventricle and moves forward. It then curves to the right side of the heart. It meets the left systemic aorta posteriorly to form the dorsal aorta. It carries oxygenated blood. From the apex of the curvature of the right systemic aorta arises a single and common carotid artery which advances anteriorly and then splits into four arteries.

The two internal carotids are connected to the systemic aorta of the corresponding sides by ductus caroticus. The ductus caroticus represents the rem­nant of embryonic radices between the third and fourth aortic arches.

The right and left systemic aortae unite a little behind the heart and give rise to the dor­sal aorta which runs posteriorly and gives branches to visceral organs and posterior parts of the body. The following arteries originate from the dorsal aorta chronological­ly along the anteroposterior axis.

(a) Anterior oesophageal artery. It is single and originates from the ventral surface of the dorsal aorta.

(b) First pair of parietal arteries which plunge into the parieties of third tho­racic vertebra.

(c) First and second pairs of gastric arteries, which supply the cardiac stomach.

(i) Coeliac artery which runs obliquely cranial, to supply the pyloric stomach. A splenic artery is given off by it to supply the spleen.

(k) Posterior mesenteric artery or hepato-intestinal artery. It arises from the right border of the dorsal aorta. It runs obliquely, and, on reaching the intestine, bifurcates into two — anterior and posterior. The anterior or hepatic supplies the gall-bladder while posterior or intestinal sup­plies the intestine.

(m) The right and left genital artery. The point of origin of the right one is a bit up than its counterpart on the left.

(o) Left and right renal arteries. There may be more than one pair.

(q) One pair of iliac arteries. Each branch after its origin runs obliquely to the corresponding hind limb. From each iliac artery, a pelvic branch is given off to supply the pelvic girdle. Finally, each branch bifur­cates into external and internal iliacs. From near the point of bifurcation a slender vesicu­lar artery is given off by each branch.

(r) The dorsal aorta now enters into the tail as caudal artery.

The deoxygenated blood from the diffe­rent parts of the body is brought back to the heart by means of veins, except the pulmo­nary veins which carry oxygenated blood. The veins run parallel to the arteries and appear dark. These are positioned super­ficial to arteries.

The central meeting arena of all veins in the body is the sinus venosus. Sinus venosus is a triangular structure and its two base angles receive left and right precavals while the apex receives a single median postcaval (Fig. 1.97). Each precaval vein has been formed by the union of three veins. 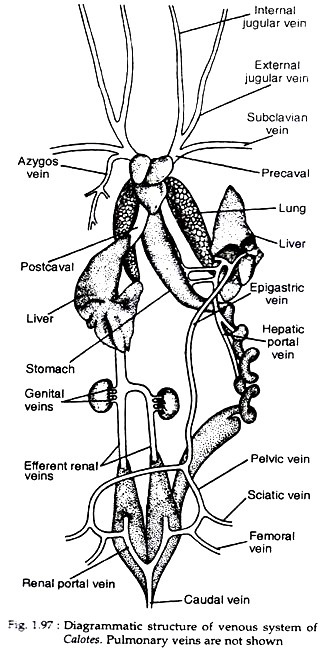 (1) The external jugular, which brings back blood from the floor of mouth and tongue.

(2) The internal jugular, which drains blood from the brain.

(3) The subclavian, which draws blood from the forelimb. The right precaval gets an azygos vein. The postcaval is consti­tuted by the large median vein, which is formed by the union of right and left efferent renal veins emerging from the two kidneys. Genital veins join the left and right efferent renal veins before their union. A pair of stout but short hepatic veins joins the median post­caval before its entry into the sinus venosus.

A median caudal vein carries blood from the tail region. The caudal vein ultimately bifurcates into two veins which enter into the kidneys. Each vein gives rise to the renal portal vein to the kidney and pelvic vein which receives femoral and sciatic veins from the hind limb. The pelvic veins unite to form a median epigastric or anterior abdominal vein which, ultimately, opens into the left liver.

The anterior abdominal vein and the postcaval are free of each other except through the renal portals in the kidneys. The blood from the visceral organs, i.e., stomach, intestine, pancreas, etc., enters into the left lobe of the liver by a hepatic portal vein.

In Calotes both renal portal and hepatic portal systems are present. These systems have got many advantages and fulfill the demand for a second set of capillaries through which blood must flow. The orga­nisms having such a portal system are always provided with double supplies of blood, arterial and venous.

The lymphatic system is highly deve­loped. The main lymphatic trunk becomes divided and enters into the precaval veins. Lymph hearts are present.