The nervous system of the Garden Lizard (Calotes) consists of the following parts: 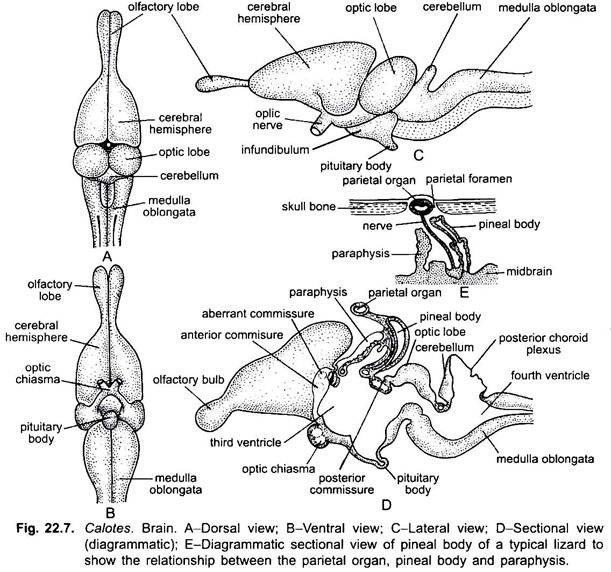 The brain is lodged in the cranium. The brain as well as the spinal cord is enveloped by two meninges, the piamater and duramater. The piamater is vascular and closely applied with the brain, while duramater is fibrous and lies outside the piamater. In between these two membranes is a space, subdural space.

In the Garden Lizard (Calotes), brain is differentiated into:

The forebrain consists of olfactory bulbs, cerebral hemispheres and diencephalon.

The diencephalon bears on the dorsal surface two outgrowths, anterior parietal organ and posterior pineal body. Paraphysis is reduced and anterior to parietal organ. From the floor of diencephalon arises a funnel-like structure, the infundibulum, at the apex of which is placed the hypophysis or pituitary body.

It includes a pair of dorso-lateral large, rounded optic lobes or corpora bigemina. Ventral to optic lobes are present two thick longitudinal bands of nerve fibres called the crura carebri. These connect the midbrain to the hindbrain.

The hindbrain consists of narrow and non-convoluted cerebellum and a long medulla oblongata that continues posteriorly with the spinal cord. Cerebellum is ill-developed. Thickenings and the ventricles of the brain are like that of Uromastix.

1. Corpus striatum are the thickenings of ventro-lateral walls of cereberal hemispheres. Roof of cerebrum is thin called neopallium.

The roof of diencephalon is thin, non-nervous and highly vascular, called the anterior choroid plexus.

Roof of medulla is thin, and highly vascular.

It runs through lamina terminalis and joins the olfactory lobes.

It is a transverse band connecting the two corpora striata of the cerebrum.

It is above the anterior commissure and connects the hippocampal regions of both cerebral hemispheres.

It is anterior to epiphysis (pineal body) and between epithalamic ganglia.

It connects the posterior part of two optic thalami and lies at the junction of diencephalon and midbrain.

Cavities or ventricles of the brain are like Uromastix and filled with the cerebrospinal fluid:

1. Rhinocoels are the cavities of olfactory lobes.

2. Paracoels or the first and second lateral ventricles are the cavities of the two cerebral hemispheres.

3. Diacoel or third ventricle is the cavity of diencephalon. It is connected with the paracoels through a foramen of Monro.

4. Metacoel or fourth ventricle is the cavity of medulla oblongata which is connected with the diacoel through a narrow iter.

5. Optocoels are the cavities of optic lobes and are also connected with the iter.

It lies in the neural canal of the vertebral column. It is anteriorly connected with the brain. It is thick-walled and bears a furrow in its roof and floor. Histologically, it is made up of white matter externally and grey matter internally. White matter is formed of medullated nerve fibres and grey matter of nerve cells.

In most reptiles (Lacerta, Calotes, Varanus, Anguis, etc.) and particularly in Sphenedon the roof of diencephalon is produced into a hollow median outgrowth, in front of epiphysis or pineal organ. The parietal organ or pineal eye is situated in the parietal foramen of the cranial roof just under the integument and covered in the young by a transparent scale.

The distal end of this becomes constricted off as a hollow sphere, while the remainder is converted into a nerve. The wall of the hollow sphere becomes divergently modified on opposite sides. The distal side gives rise to a lens-like thickening. The proximal side forms a membrane several layers in thickness-the retina. The whole is enclosed in a capsule of connective tissue. The nerve usually degenerates before the animal reaches maturity. 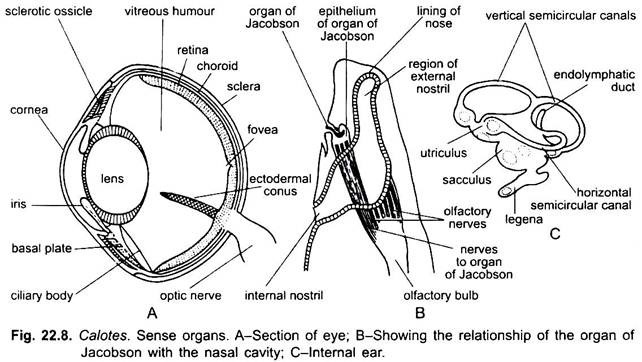 The function of the reptilian pineal eye is still obscure. The skin over the top of the pineal eye in some reptiles becomes depigmented and takes the shape of cornea. The parietal organ is though eye-like in appearance, but it has no trace of any visual function. Histological evidences have not proved that this organ is a vestige of once functional median eye.

The cranial and spinal nerves form the peripheral nervous system.

Like Uromastix, in the Garden Lizard (Calotes) also cranial nerves are 12 pairs besides the terminal nerve. The origin, distribution and biological nature of the first to tenth pairs of cranial nerves is exactly similar to frog and fishes. The spinal accessory (11th) and hypoglossal (12th) cranial nerves arise from the medulla behind 10th pair and innervate the muscles of larynx, neck and tongue.

Sixteen pairs of spinal nerves arise from the spinal cord and come out from it between the vertebrae. These are mixed types of nerves. Each nerve originates by two roots, a dorsal and a ventral, and both unite before emerging from the vertebral column.

After coming out from the vertebral column, each divides into four branches or rami:

A chain of ganglia on either side of dorsal aorta, beneath the vertebral column, form the autonomic nervous system. Each ganglion is connected with adjacent spinal nerves by a small nerve, the ramus communicans.

Corresponding ganglia of both the chains are also connected by small transverse commissures. On either side the chain of ganglia or sympathetic cord enters the skull to unite with the vagus ganglion of Xth nerve and then again runs forward to join the gasserian ganglion of Vth nerve. The branches from these ganglia go to muscles of heart, lungs, alimentary canal and glands.

The sensory organs, in structure and function, are just like the Uromastix.