The brain of birds is much more highly developed than that of reptiles and is relatively largest, next to those of mammals. The hemispheres are without superficial convolutions.

The brain of pigeon is relatively larger than in lower forms, but in shape it is short, broad, rounded in form and whitish in colour. It completely fills the roomy cranial cavity. It is covered by two protective membranes or meninges (singular, meninx), an outer duramater of connective tissue and an inner pia-arachnoid rich in blood supply. The narrow space between two meninges has connective and fatty tissues, veins and cerebro-spinal fluid. The brain is divisible into forebrain, midbrain and hindbrain.

The olfactory bulbs or lobes are extremely small and degenerate due to poorly developed organs of smell. But is Apteryx olfactory chamber is highly developed extending from tip of the beak to the level of the optic foramina. The cerebral hemispheres are pyriform, large-sized, convex, and separated by a deep sagittal fissure. The cerebral hemispheres are relatively smooth and lack characteristic fissures of mammalian brain and reach the cerebellum posteriorly.

A small pineal body lies dorsally at the posterior part of sagittal fissure of the cerebrum and an anterior choroid plexus. On the ventral surface of the visible diencephalon, the two prominent and large optic nerves cross each other forming the optic chiasma. Behind the chiasma projects a median process the infundibulum, bearing a large hypophysis or pituitary gland, which lacks the intermediate lobe.

The midbrain is highly developed due to keen sight of birds, with two large very well developed optic lobes. These are lateral in position because they have been pressed outwards by the cerebral hemispheres which meet posteriorly with the cerebellum. These are of large and rounded form. Both optic lobes remain connected together by a transverse optic commissure.

The cerebellum is highly developed, large, folded and extends forwards. It is divisible into a large median lobe or vermis and two small, conical, lateral lobes or flocculi. The vermis has transverse grooves forming folds and ridges, so that the superficial grey matter is greatly increased in extent. The convoluted cerebellum indicates the delicate sense of equilibrium and the great power of muscular coordination belonging to birds.

The cerebellum extends far backwards covering a large part of the medulla oblongata, which descends almost vertically from it, to join the spinal cord. At the point of junction of medulla oblongata and spinal cord occurs a well-marked ventral flexure, as in lizards.

The corpora striata of both the lobes are interconnected by a transverse anterior commissure. The corpora striata are characteristic of birds, their size makes the lateral ventricle small. They receive fibres from the thalamus and send fibres (crura cerebri) to the midbrain, cerebellum, medulla, and indirectly to the spinal cord. Posteriorly, each lateral ventricle or paracoel communicates by a small common aperture, the foramen of Monro, with the narrow, vertical cavity of the diencephalon, termed the third ventricle or diacoel.

The thin roof of diacoel is called epithalamus. It contains a richly vascular tissue, the anterior choroid plexus located just in front of pineal body. The diacoel remains bounded laterally by the thick optic thalami, while its thick floor is termed hypothalamus. 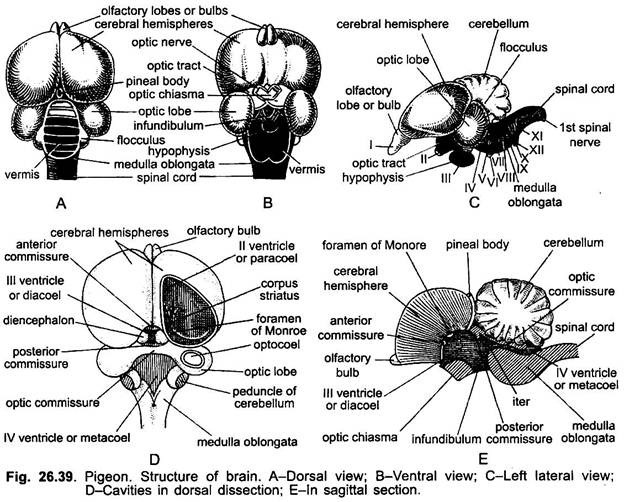 The diacoel remains separated from the narrow cavity of the midbrain, called iter, by posterior commissure. The iter communicates dorsally with the cavities of the optic lobes, called the optocoels. Thick longitudinal bands of nerve fibres forming the crura cerebri run beneath the optic lobes and connect the diencephalon with the medulla.

The cavity of the medulla oblongata is called fourth ventricle or the metacoel (or myelocoel). It sends a branch to cerebellum. Its roof is thin, highly vascular, called posterior choroid plexus, and its sides and floor are thick-walled. The anterior and posterior choroid plexes secretes the cerebrospinal fluid which fills in the ventricles of brain.

The functions of different parts of brain are following:

b. Cerebral hemispheres- Voluntary movement or conditioned reflexes, intelligence, will, memory, emotions, etc. The corpora striata are concerned in the control of the reflex behaviour governing the lives of birds, such as eating, locomotion, copulation, nest building and care of the young.

In the lumbar enlargement, the dorsal horns of the gray matter diverge outwards, so that the central canal forms a wide, diamond-shaped cavity called sinus rhomboidalis, containing a gelatinous substance. The central canal of spinal cord is continuous with the cavity of medulla and filled with the cerebrospinal fluid.

Histologically, it is formed of inner H-shaped grey matter and outer white matter. The spinal cord controls reflex activity and serves to conduct impulses to and from the brain.

The number, name, function of twelve pairs of cranial nerves of pigeon is the following:

The dorsal and ventral roots unite inside the vertebral column (inside the central canal) and come outside the column as spinal nerves. Each spinal nerve divides into dorsal ramus, long ventral ramus and ramus communicans.

In pigeon, the cervical spinal nerves pass out to the neck region. The last three cervical nerves and first thoracic nerve form a brachial plexus going to the wing. Next five thoracic spinal nerves pass between the ribs. Following these is a lumbosacral plexus which may be separated into lumbar, sacral and pudendal plexuses.

The lumbar plexus of three nerves supplies the thighs. Five nerves of the sacral plexus unite to form a sciatic nerve which passes through the thigh and goes to the lower leg. The pudendal plexus sends branches to the cloaca and the tail. 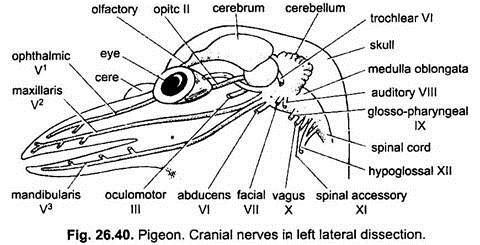 The autonomic nervous system of pigeon includes sympathetic and parasympathetic systems and is very much like that of mammals. It contains nerves and ganglia. Fibres link up the spinal nerves with the ganglia and the spinal cord. The sympathetic nerves supply chiefly the urinogenital, alimentary, respiratory and circulatory systems.