The digestive system of pigeon is well developed and includes an alimentary canal and the digestive glands.

The alimentary canal of pigeon (Fig. 26.28) is long, tubular and coiled. It comprises mouth, buccal cavity, pharynx, oesophagus, stomach, small intestine and large intestine which opens to the exterior by cloacal aperture. All the segments of alimentary canal fall into following three categories- foregut or stomodeum, midgut or mesenteron and hindgut or proctodeum. 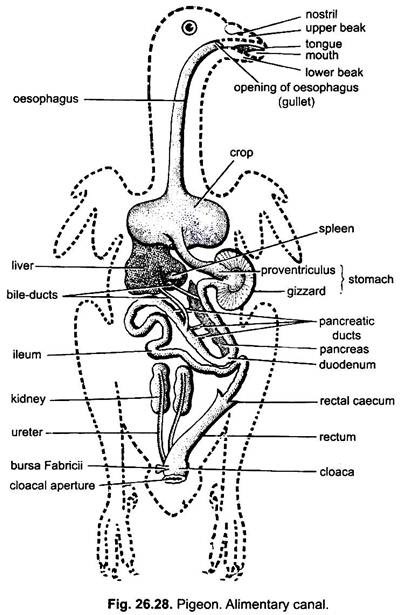 The portion of alimentary canal from mouth to stomach region is lined by ectodermally derived layer.

The featureless buccal cavity has a large, narrow, triangular and pointed at the tip the tongue at its floor. The tongue has few taste buds and mucous glands, and has the function of manipulation of food. The buccal cavity is followed by pharynx. 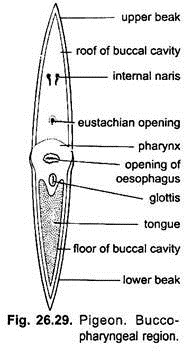 Oesophagus or gullet is a long, wide, distensible and thick-walled tube which runs backward through the neck to join a large dilated reservoir or crop. It is a large, thin-walled, bilobed, elastic and non-glandular sac. The crop enables the bird to store quickly swallowed food for later digestion. It is specially large in graminivorous (gram-eating) birds such as pigeons, finches, buntings, parrots, etc.

The grains are moistened and softened in it. The epithelial lining of the crop in both sexes thickens and sheds a white, slimy, proteinous and fatty “crop milk” during the breeding season on which the youngs are fed by both parents. Pigeon milk is produced by the degeneration of the epithelial cells lining the crop, under the control of prolactin hormone, secreted by the anterior lobe of the pituitary gland. This hormone stimulates and controls the formation of pigeon’s milk. Pigeon’s milk contains water (65-81%), protein (casein) (13.3-18.8%), fat (6.9-12.7 %) and lactose (1.5%).

It is more nourishing than the cow’s milk. Pigeon’s milk contains 35 per cent of fat in comparison to 3 to 5 per cent in cow’s milk. The young ones fed on it double their weight in two days. The pigeon’s milk is regurgitated to the youngs.

The crop also contains some mucus secreting glands. Beyond the crop, before opening into the stomach, the oesophagus become thick-walled and narrow tube. 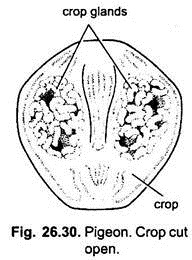 The stomach is differentiated into an anterior glandular proventriculus and a posterior muscular gizzard.

The proventriculus is a small, thick- walled and glandular structure appearing externally as a slight dilation of the oesophagus but it is a gastric structure. Its thick mucus lining secretes the gastric juice. The spleen is a small, oval red body and remains attached to the right side of the proventriculus by peritoneum.

The midgut, mesenteron or small intestine is a narrow tube and has a lining of endodermally derived epithelium. The small intestine is divided in an anterior duodenum and a posterior ileum. The bile and pancreatic ducts usually open into the distal limb of duodenum. In pigeon the left bile duct enters close to the pylorus.

The duodenum arises from the dorsal side of gizzard so that the pyloric opening of gizzard into duodenum lies close to the cardiac opening of proventriculus into gizzard. The duodenum forms a U-shaped loop enclosing the pancreas between its two limbs.

The portion of the small intestine behind the duodenum is called ileum Ileum is a long and coiled tube of uniform diameter. Its inner epithelial lining is thrown into numerous minute, finger-like processes or villi, which greatly increase its area of secretion and absorption.

The slender ileum continues into large intestine of similar diameter. The function of ileum and large intestine is externally marked by the presence of a pair of small conical, blind pouches, the rectal or colic caeca. The rectal caeca probably absorbs some water from digestive food. The large intestine or hindgut (proctodaeum) is a short tube and comprises an anterior rectum and a posterior cloaca. 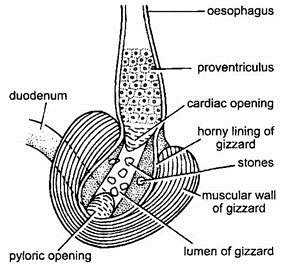 The cloaca is a large chamber and divided into three linear compartments: an anterior coprodaeum which receives the rectum, a short middle urodaeum into which urinary and genital ducts open, and a proctodaeum which opens to the outside by the cloacal aperture or vent.

The urinary products are made solid by absorption of water in the urodaeum and the walls of other chambers serve a similar purpose. A small, thick-walled, glandular, blind pouch of lymphatic tissue, the bursa Fabricii, lies on the dorsal side of the cloaca.

It is lined with endoderm, and opens into the proctodaeum. In a young bird it forms lymphocytes, and probably it produces antibodies and protects it against local infection, but it atrophies in the adult before sexual maturity. It is also called cloacal thymus because, like thymus, it produces lymphocytes. Like thymus, it is prominent in young animals and usually much reduced in the adult. 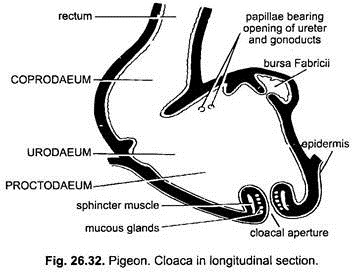 Pigeon has no salivary gland in the buccal cavity, but has a median sub-lingual gland and a pair of angle glands near the corners. These glands are the only buccal glands which secrete mucus to moisten the food and probably the amylase enzyme. The tongue also bears few mucous glands.

The liver of pigeon is large, compact, dark red, bilobed, containing a large right lobe and a small left lobe. From each lobe of the liver arises a bile duct, the left bile duct opens into the proximal limb near the pylorus and the right duct opens into the distal limb of duodenum. In pigeon, gall bladder is lacking, but it is present in Gallus and many other species. The liver secretes bile Juice.

Between two limbs of the duodenum is a large, compact, reddish digestive gland, the pancreas. Pancreas gives off three separate pancreatic ducts which pour the pancreatic secretions containing many enzymes into the distal limb of duodenum.

The epithelial linings of intestine have many glands which secrete many enzymes. The duodenum is lined with villi and single or branched crypts of Lieberkuhn. Goblet cells are also present.

The pigeon is graminivorous and it feeds chiefly on cereals, pulses, seeds, etc. These seeds are picked up with the beak, manipulated by tongue and lubricated inside the buccal cavity with the secretion of buccal glands. The food is swallowed as such, because beaks lack teeth.

The food which is lubricated and moistened by the secretions of buccal glands inside the buccal cavity passes through the oesophagus into the crop, where it is stored. Inside the crop, the food is softened by joint action of body warmth, water, mucus, amylase enzyme of buccal secretions and also due to bacterial autolytic action.

From crop the food passes into proventriculus where it is chemically acted by peptic enzyme of gastric juice. From proventriculus the food enters the gizzard where mechanical breakdown of food takes place by muscular contractions of gizzard wall and grinding action of small stones inside the lumen of gizzard.

In gizzard little digestion of food occurs and it is made acidic by secretion of its walls which have many hydrogen ions. The partly digested food, the chyme, passes through the pylorus into the duodenum. In the duodenum the chyme is mixed with bile, pancreatic juices and intestinal secretions.

The chemical conversion of fats, proteins and carbohydrates into glycerol and fatty acids, amino acids and monosaccharides, respectively, takes place in duodenum like other vertebrates. The bile salts help in the digestion and absorption of fats. Thus, in duodenum, all the three classes of foodstuffs (i.e., proteins, fats and carbohydrates) are converted into readily diffusible micromolecules (i.e., amino acids, glycerol and fatty acids and monosaccharides).

These micromolecules readily diffuse into the thin walls of ileum and mix into the blood. The bile salts help in the digestion and absorption of fat. Thus, digestion, absorption and assimilation of food occurs in the small intestine.

The undigested portion of food passes to the rectum, where absorption of remaining water takes place. The faecal matter which is almost dry due to absorption of water is finally ejected through the cloacal aperture.

The large surface area, high temperature and great activity of birds necessitate a high food intake, especially in the smaller types. This is due to rapid passage of food through the gut. The amount of food taken per day may reach nearly 30 per cent of the body weight (6g) in the very small gold crest and about 12 per cent in starling weighing 75g. The food is very efficiently utilised inspite of the rapid passage.