The alimentary canal of Uromastix is a long and convoluted tube. It can be divided into mouth, buccal cavity, pharynx, oesophagus, stomach, duodenum, ileum or small intestine, colon, rectum or large intestine, cloaca.

It is narrow in front and broad towards the posterior side. It is lined with mucous membrane and contains tongue, internal nares and teeth over the jaws. The mucous membrane of the buccal cavity possesses the mucous glands in four groups.

The buccal cavity has a well developed muscular tongue on its floor. It is attached to the floor of the buccal cavity along the median ventral line. The tongue is long, anteriorly bifid and protrusible. Its broad posterior end is fixed and also bifid. The tongue bears the voluntary muscles, taste buds and mucous glands. Taste buds are present over the glandular papillae found in the mid-dorsal groove.

These are present in the roof of the buccal cavity near the anterior end. These lead into nasal chambers and open outside by external nares located at the anterior end of snout.

Teeth are arranged over the premaxillae and maxillae of the upper jaw and dentaries of the lower jaw. The teeth are small, conical and acrodont, i.e., they are attached to the outer borders of the bones of jaws. The palate bears no teeth.

The buccal cavity is continuous with the pharynx. The pharynx lies posterior to the tongue. The mucous lining of the pharynx is thrown into longitudinal folds. The floor of pharynx contains a median longitudinal slit called the glottis leading into trachea. It is present in between the posterior bifurcation of the tongue. Near the jaw angles are present rounded apertures of eustachian tubes, one on either side. Pharynx leads posteriorly into the oesophagus through a wide gullet. It only opens when food is swallowed. 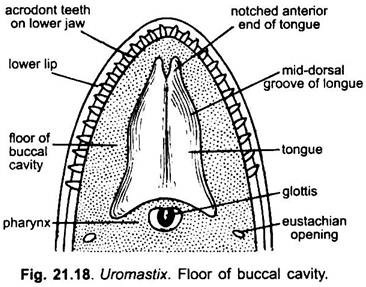 The oesophagus is a long, narrow, straight cylindrical muscular tube. It is capable of distension at the time of food swallowing. There are numerous longitudinal folds present on the entire inner surface of the oesophagus. It leads into the wide cylindrical stomach through long neck.

The stomach is a long cylindrical sac-like structure, wider than the oesophagus. It has thick muscular walls and lies in the left half of the body and is roughly U-shaped. The stomach is suspended in the body cavity by a fold of peritoneum called the mesogaster.

The distal end of pyloric stomach is constricted and internally bears a pyloric sphincter or valve (a ring of circular muscles). It allows only the digested food to pass into the duodenum. The stomach is the seat of digestion. 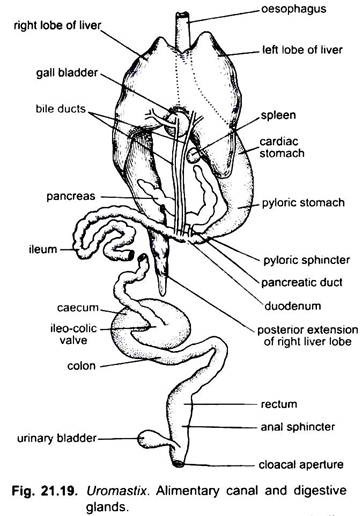 It is a long, narrow, coiled tube and comprises an anterior duodenum and a posterior ileum.

The duodenum with the stomach forms a U-shaped structure. In between the duodenum and stomach is present the pancreas. The duodenum receives the bile and pancreatic duct.

The ileum is a long coiled tube and merged imperceptibly with the duodenum. The ileum is attached to the dorsal wall of the coelom by the dorsal mesentery which runs along the coils. Histological structures of duodenum and ileum exhibit closely-set wavy longitudinal folds of mucosa. These folds increase the secretory area and absorptive area of the small intestine. The ileum is relatively short in lizard as found in other carnivorous animals and after a few coils opens into the large intestine.

The large intestine consists of a proximal colon and a distal rectum.

The thin-walled colon comprises the large proximal portion into which the ileum opens directly and a distal narrower tubular portion which leads into the rectum. The proximal and distal portions of the colon are attached with the dorsal wall of the coelom by the dorsal mesentery. A blind pouch, the caecum, arises from the junction of the ileum and colon.

At the junction of ileum and caecum internally is present the ileo-coecal valve. The walls of colon and caecum are thin so their contents are visible through them. Within the colon the water is absorbed and faeces in formed.

The colon is continued into the tubular and narrower rectum. The rectum is very much thick-walled. It takes a sharp curve upwards towards the left and again turns sharply in the posterior direction. The faeces is stored in the rectum. The rectum opens into the cloaca and both are separated by a sphincter. The cloaca opens to the exterior by the cloacal opening. 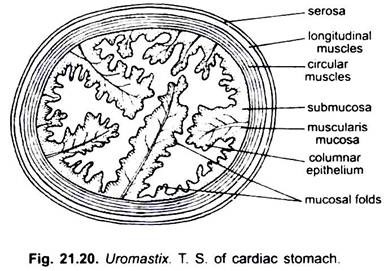 The cloaca is divisible internally into three chambers, the coprodaeum, the urodaeum and the proctodaeum. The anterior chamber coprodaeum receives the rectum. The middle chamber urodaeum dorsally receives a pair of ureters and gonoducts and ventrally the urinary bladder.

These two chambers open into the proctodaeum, closed by a cloacal sphincter. This division of the cloaca is associated with the necessity for the retention of water. The posterior chamber proctodaeum opens externally by the cloacal aperture. It is a transverse slit located ventrally at the junction of trunk and tail. 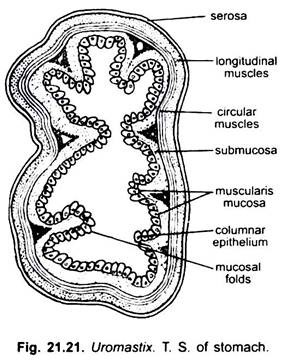 The cloaca serves for reabsorption of water from the faeces and urine. Such conservation of water is a terrestrial adaptation as the lizard lives in an arid land with scarcity of water. The faeces and urine are converted into dehydrated cylindrical castings or pellets (Fig. 21.23.) which are egested through the cloacal aperture.

In uromastix, the digestive glands associated with the alimentary canal are:

The gastric glands are microscopic, simple or branched pits in the mucous membrane of the stomach. Since they are microscopic, they are, therefore, not visible. These glands discharge gastric juice into the cavity of stomach.

The liver consists of three lobes- right, left and dorsal. The right lobe is long and narrow extending up to the right gonad. The left lobe is short and broad lying ventral to the cardiac stomach. The dorsal lobe is small, found attached to the dorsal side of the left lobe. 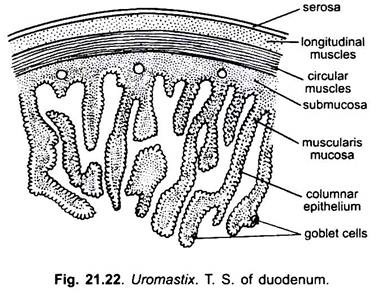 The pancreas is a white, elongated, narrow, band-like gland, which lies along the pyloric stomach in between duodenum and the stomach. The pancreatic duct originates from the posterior end of the pancreas and opens into the duodenum just in front of the openings of the bile ducts. The pancreas secretes pancreatic juice.

Besides these, a few salivary glands are also present in the buccal cavity which secretes mucus (Keith).