The digestive system of pigeon includes alimentary canal and digestive glands. This system helps in nutrition. In comparison to the size of the bird, the length of the alimen­tary canal is short and its different parts are modified in such a way that assimilation of simplified food occurs in a short time. The digestive system is highly modified in pigeon due to loss of teeth and also due to an adaptation for aerial life.

The alimentary canal (Fig. 1.113A) con­sists of the following parts: 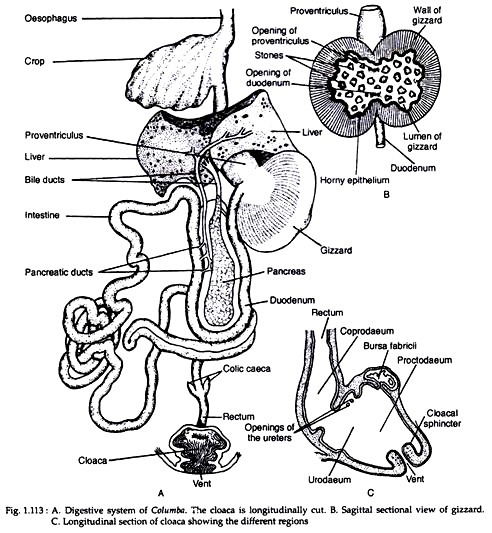 It is a single opening on the roof of the pharynx through which both the nares open internal­ly.

It is a prominent structure with free pointed anterior end. Some taste buds and numerous mucous glands are pre­sent on the surface of the tongue.

It is an aperture which leads into trachea and is placed near the base of the tongue.

It begins from the gullet and runs through the ventral part of the neck as a straight tube. Near the junction of neck and trunk it comes between skin and muscle and enlarges to form a sac, called crop. The crop plays a dual role in the life of pigeon and other birds. It acts as a large temporary reservoir of crude food grains.

The presence of crop enables the bird to ingest a conside­rable quantity of food grains very quickly. Food may be regurgitated from the crop to feed the young. Besides its normal function of storage, the crop glands present in the epithelial lining of the crop produce a proteinaceous, white slimy secretion called pigeons milk.

This is produced in both the sexes during breeding season. The young squabs are fed by the parents by regurgita­tion of the fluid. The secretory activity of the crop-glands is controlled by the hormone called prolactin of anterior pituitary.

The composition of pigeons milk is given:

It has a great nutritive value, even more efficient than mammalian milk. From the crop, the oesophagus enters the cavity of trunk and passes dorsal to the heart to open into the next part of the alimentary canal called stomach.

It is divisible into two distinct parts:

It is the first part of the stomach to receive the oesophagus (Fig. 1.113A). It is tubular and internally lined by numerous gastric glands. A red-coloured small spleen remains morphologically attached to the outer side of proventriculus.

It is the second part of stomach and is semi-circular in outline. The walls of the gizzard are highly muscular. It contains very little inner space. Internally the wall contains numerous ridges and its epithelial lining becomes very thick and tough. It has innumerable small tubular glands.

A few stones, which are swallowed by the bird, remain within the lumen and are responsible for crushing the food (Fig. 1.113B). The function of gizzard is purely mechanical and acts mainly as the grinding machine to crush the food. The gizzard compensates the role of teeth in pigeon.

Intestine begins from the gizzard near the opening of proventriculus and is divisible into following parts:

This is the first part of the intestine and is distinctly ‘U’-shaped in appearance. Internally, the duodenum con­tains villi, crypts of Lieberkuhn and goblet cells.

It is the second part of the intestine having numerous villi inside it. The length of the ileum is shorter than that of other vertebrates. The first and the last parts of the ileum are loop-like and the middle part is spirally coiled.

It is the last part of the intestine and is of same thickness as that of ileum. Near the junction of ileum and rectum, a pair of small lateral blind leaf-like caeca originates.

Rectum opens into a chamber called cloaca. The cloaca is spacious, muscu­lar and is elaborated into three chambers: coprodaeum, urodaeum and proctodaeum (Fig. 1.113C). The coprodaeum receives the intestine. The urinogenital ducts open within the urodaeum and the proctodaeum opens externally by the vent.

In the nestlings, a spe­cial thick-walled glandular chamber, bursa fabricii, remains in close association with cloaca and communicates with the procto­daeum. It degenerates in the adult bird. The bursa fabricii may have some local protective function in young ones.

The proctodaeum of cloaca opens to the exterior through the cloa­cal aperture or vent. It is present on the ven­tral side and near the base of the tail.

There are membranes and mesenteries which divide the body cavity into different parts and also support the viscera.

The following membranes and mesenteries are prominent:

(i) Parietal peritoneum is the membrane lining the body wall.

(ii) Ventral ligament arises from the ventral body wall to the gizzard.

(iii) Falciform ligament arises from the ventral body wall to the ventral side of the liver. It is continuous with the ventral ligament.

(iv) Oblique septum is a partition arising from the lateral body wall to the centre which separates the body cavity into an ante­rior and posterior compartment. This septum is continuous with the pericardial sac at the centre and encloses the posterior air-sacs.

(vi) Coronary ligament attaches the anterior side of the liver to the combined pericardial sac and oblique septum.

(vii) Gastro hepatic ligament attaches the giz­zard to the liver.

(ix) Meso-duodenal ligament connects the two halves of the duodenal loop. The pancreas is also located on this ligament.

(xi) Hepato-duodenal ligament connects the duodenum to the liver.

Following digestive glands are asso­ciated with the alimentary system:

These are present on the surface of the tongue and crop and are responsible for moistening of the food.

The secretion called “crop milk or pigeons milk” is secreted by these glands. The secretion is used for the nourish­ment of the youngs.

These are present on the internal lining of proventriculus and secrete gastric juice.

These glands are pre­sent on the internal lining of gizzard. The fluid secreted by these glands is thick, yellowish green in colour.

Paired deep brown coloured glands of immense size are present ventral to the gizzard. It produces the bile which pass­es through two bile ducts, one coming from each lobe of liver. The bile ducts open sepa­rately within the two limbs of the duodenum. The gall bladder is absent in pigeon. Loss of gall bladder is an adaptation to aerial life for reducing the weight of the body.

Crypts of Lieberkuhn and Goblet cells:

These are present in the lining of the duo­denum and its secretion influences the pan­creas to produce pancreatic juice.

Glands in the ileum:

Produce certain digestive juices for the digestion of vegetable fibers. They are also concerned with the absorption of water.

The physiology of digestion in pigeon involves the three following steps:

Pigeon is a grain or seed eater. It picks up grains very rapidly which are quickly swallowed. The shape of the beak is modified in such a way that it helps in its ingestion. The swallowed food, being mois­tened by mucus, is stored in the crop.

Within the crop the food is moistened and macerated. The passage of food from crop to proventriculus is regulated. Inside the proventriculus, the gastric juices containing HCl and pepsin act over the food. Within the gizzard the food is completely churned by the action of gizzard wall and stones. The secretion of gizzard glands helps in the process.

The churned food, while trav­elling through the duodenum, comes in con­tact with the bile and pancreatic juice. The bile neutralizes the acidity. Different enzymes are present in the various digestive juices. The completely broken-down food is absorbed through the lining of small intestine. Residual part passes into the rectum where water is absorbed and the fibres are broken down by the caecal juice.

Residual part called faeces is temporarily stored in the cloaca where it mixes with the urine and is periodically dropped through the cloacal aperture.