In this article we will discuss about the respiratory system of pigeon.

The aerial mode of life requires extra energy. In order to get energy, pigeon eats large quantity of food and to break down the assimilated food at a faster rate, the respira­tory system is extensively modified. The lungs are proportionately smaller in size, but the functional efficiency is greatly increased by the development of air-sacs.

The respiratory system of pigeon has two unique features:

Following structures are present in the respiratory system of pigeon:

These are paired openings, present near the base of the upper beak and within the cere.

Single opening which opens at the roof of pharyngeal region and both the external nares communicate through this common aperture.

This is a slit-like aperture, which is present on the floor of the mouth cavity and near the base of the tongue. It leads into the next part called trachea.

This elongated tube begins from glottis and runs along the neck region along the ventral side of the oesophagus. The trachea is composed of complete bony tracheal rings (Fig. 1.114). Near its commence­ment, the trachea is enlarged into a chamber called the larynx.

This chamber is supported by a cricoid cartilage (which is composed of four pieces) and one pair of arytenoid carti­lages. In birds, the larynx does not function as voice box.

Near the junction of neck and trunk, the trachea is swollen into a cham­ber called syrinx (Fig. 1.114B). It is formed by the dilatation of the last three or four tracheal rings and first bony ring of each bronchus.

The mucous membrane of the syrinx consti­tutes a pad-like thickening and is provided with several muscles and membranes. The syrinx is actually the voice box. The syrinx is the characteristic organ of pigeon and many other flying birds.

It has a complicated struc­tural construction. A bar of cartilage called pessulus is present at the junction of two bronchi. It extends dorsoventrally inside the tympanum and holds a small fold of mucous membrane called semilunar membrane or membrana semilunaris (Fig. 1.114B).

The inner membranous lining of the bronchi pro­duces inconspicuous internal tympani-form membranes. Sound is produced by the vibra­tion of the membrana semilunaris while the pitch of the sound is controlled by the action of the syringeal musculature.

The syringeal musculature includes a pair of intrinsic syringeal muscles (which arise from the late­ral sides of the trachea and are attached with the syrinx) and a pair of sternotracheal mus­cles (originate from the sternum and are inserted into the trachea). The position of syrinx can be changed by the action of these muscles.

Within the trunk, the tra­chea bifurcates into right and left bronchi. The first ring of each bronchus is complete and bony, while the rest are incomplete mesially. The left and right bronchi are called primary bronchi or mesobronchi. Each mesobronchus, in the beginning, is composed of rings of cartilages, but inside the lung such rings are absent.

Each primary bronchus enters the lung through a small space called vestibulum and extends up to the posterior extremity of lung. Within the lung, the meso­bronchus sends a pair of branches called secondary bronchi and each secondary bronchus breaks up into a network of tertiary or para-bronchi and sends branches to the air-sacs.

Each tertiary bronchus again sub­divides into numerous finer network of tubules (air capillaries), which remain in close contact with the blood capillaries. While running posteriorly, the diameter of meso­bronchus gradually decreases and it finally opens into the abdominal air-sac by an ostium.

The lungs are small in size in comparison with that of the body. These are paired pink-coloured organs. The lungs are spongy organs with little elasticity. The dorsal surface of the lungs is fitted closely with the interspaces of ribs and lacks the peritoneal covering, i.e., pleura is absent on the dorsal side.

The ventral wall has a com­pact fibrous tissue sheet called pleura or pul­monary Apo neurosis. The wall of the pleura has special fan shaped costopulmonary mus­cles which originate from the joints of verte­bral and sternal ribs. The alveolar lining is formed by the ramification of tertiary tubules with the distribution of blood vessels.

The air-sacs are bladder-­like structures. These are formed by the dila­tion of the mucous membrane of the bronchus. The air-sacs are thin-walled mem­branous sacs and are devoid of blood vessels. Following air-sacs are present in the body of pigeon and all of them remain in communi­cation with the pneumatic cavities of bones. There are nine major and four accessory air- sacs in pigeon (Fig. 1.115). 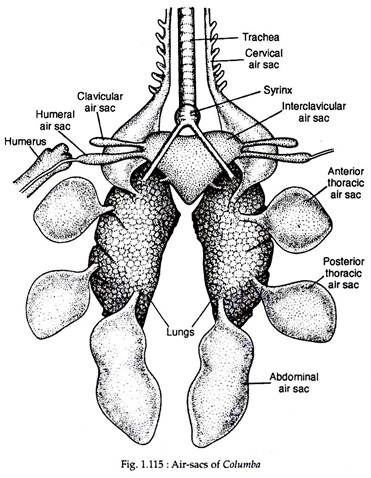 The major air-sacs (Fig. 1.115) originate directly from the lungs. Of the nine air-sacs, four are paired and one is unpaired:

(i) Posterior or abdominal air-sacs.

(i) Inter-clavicular or median air-sac.

These paired sacs are:

These are also called the posterior air-sacs and lie among the coils of intestine. These are the posterior- most and largest air-sacs in birds. The right air-sac is larger than its left counterpart. These air-sacs send diverticula into the pelvic girdle, synsacrum, hind limbs and between thigh muscles.

These paired air-sacs are placed on the posterior side of the thoracic cavity. The left sac is slightly larger than the right. Both the sacs are closely apposed with the lateral wall of the body cavity. Each bronchus, near its entrance into the lung, gives three short branches: One enters into the anterior tho­racic air-sac, the second is connected with the cervical air-sac and the third enters the inter-­clavicular air-sac.

These paired air-sacs are located one on each side of the thoracic cavity towards the anterior part between the lungs and the ribs.

These paired air- sacs are placed near the base of the neck and lie in front of the lungs. Each sac sends diver­ticula into the cervical vertebrae and the skull.

This is an unpaired and median air-sac of large size. It has two ducts, one opening into each lung. Although this sac is unpaired in adult, it is formed by the fusion of two sacs which are evident by the presence of two ducts.

Each side of this air-sac gives off two extensions—

(i) Clavicular air-sac and

These sacs are communicated with the cavi­ties of the bones.

A layer of fibrous tissue called oblique septum encloses the ventral walls of both the thoracic air-sacs. This septum extends up to the pericardium and unites with the similar septum of the other side. Such union along the middle line separates the body cavity into two chambers.

One chamber houses the lungs, thoracic and inter-clavicu­lar sacs and the other chamber contains the heart, liver, stomach, intestine and abdominal air-sacs.

The air-sacs play an important role in the life of flying birds. The air-sacs are not provided with capillary net­work, so they are not directly respiratory in function. Besides, these sacs are essential components for aerial life.

The different uses of air-sacs are:

As the lungs are anchored firmly to the dorsal wall of the thoracic cavity, the elasticity of the lungs is greatly hampered. To carry on an efficient circulation of air through lungs during respi­ration, some mechanical aid becomes neces­sary, specially during flight. The air-sacs give mechanical aid by acting as the bellows.

When the air-sacs are inflated due to intake of warm air, the speci­fic gravity of the body is lowered to a consi­derable extent. As the warm air is lighter than ordinary air, the retention of such air inside the air-sacs makes the body conside­rably lighter. This also lessens muscular efforts to sustain the body heavier than air.

The air-sacs are so nicely arranged on the two sides of the body that proper centre of gravity is established for balanced flight. If the equilibrium is lost by chance during flight, restoration of the equi­librium is easily maintained by shifting of the contained air from one side of the body to the other.

The air-sacs send branches which are inserted between the muscles (specially the flight muscles) like pads. Such a placement of air-sacs reduces mechanical friction to a large extent and increases the flexibility of the wings during flight.

The skin of bird lacks integumentary glands. So the skin has no utility in the regu­lation and maintenance of body temperature. Retention of warm moist air inside the air- sacs helps to regulate and maintain the body temperature.

Serve as the containers of reserve air:

The respiratory process is slightly hampered for the time. Therefore, some internal source of reservoir of air becomes indispensable. The air-sacs sub serve this function and ventilate the lungs during flight.

The pitch of the sound is controlled to some extent by the forceful expulsion of the air from the air-sacs which act as resonator.

Water is evaporated from the walls of the air- sacs in birds. So the air-sacs regulate the water content of the body.

The unique feature of avian respiration is the double supply of oxygenated air to the surface of lungs for improved aeration. For this reason, respiration in birds is called dou­ble respiration. Two cycles of inspiration and expiration are required for a single volume of gas to move through the respiratory system. During the first inspiration, the sternum is lowered, and the lungs and the air-sacs are expanded.

In other air-breathing animals, in between inspiration and expiration, some amount of residual air always remains within the cavity of lungs. But in birds, the residual air remains inside the air sacs and in the smaller branches of the bronchi. As the aera­tion of blood is complete in pigeon, it thus increases the respiratory efficiency to yield extra energy.