In this article we will discuss about the respiratory system of rabbit with the help of suitable diagrams.

Its function is to allow the fresh air to enter the lungs and the exit of foul air from lungs to outside.

It has the following parts:

The fresh air is drawn in through a pair of external nares located at the tip of snout.

It acts on organ of smell. The air when passes through the nasal chambers, it becomes moist and warm. Dust particles, etc., also adhere to the hairs present in the proximal part of nasal passage and do not enter the lungs.

Both the nasal chambers posteriorly open into the naso-pharynx through the internal nares lie above the soft palate. The nasopharynx leads behind into the laryngopharynx.

The floor of laryngopharynx bears a median, vertical, slit-like aperture, the glottis, which leads into larynx. From its anterior margin arises a bilobed cartilaginous flap covered by mucous membrane, called the epiglottis. During swallowing of food it covers the glottis.

The larynx or voice-box is a small dilated chamber which is the sound producing organ of rabbit. It is a modified anterior part of the trachea. The wall of larynx is supported by four cartilages- thyroid, cricoid and a pair of arytenoids. (i) The largest shield-shaped or girdle-like and most anterior is the thyroid cartilage which supports the larynx ventrally and laterally. It is incomplete dorsally. (ii) Just posterior to it is a ring­ like cricoid cartilage which is broad on the dorsal side but narrow ventrally. (iii) A pair of small arytenoid cartilages are situated at the dorsal side of the larynx, anterior to cricoid.

There is also a pair of small nodule-like cartilages of Santorini, situated at the anterior tips of arytenoid cartilages. A pair of membranous folds, the vocal chords, are found extending between the thyroid above and aryteniod cartilages below. The vocal cords are the folds of the lateral wall of the larynx and close the glottis except for a slit-like aperture between their free edges.

These are formed of elastic connective tissue covered by mucous membrane. In resting condition the vocal cords lie at an acute angle to one another and the glottis remains widely open to allow free passage of air.

At the time of sound production the vocal cords lie close to each other. The vocal cords are regulated by the action of a set of muscles (intrinsic laryngeal muscles) attached to the cartilages of the larynx. 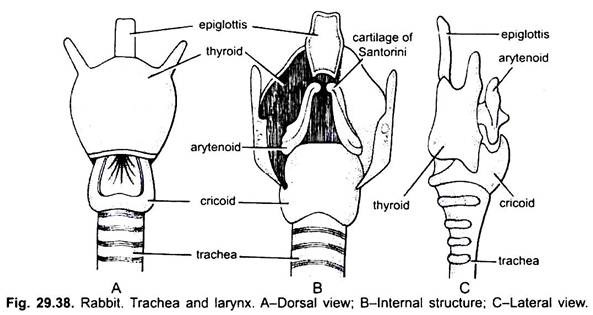 These muscles are responsible for the pitch and quality of sound produced. In this condition the vocal cords are subjected to vibrations by the current of air passing through them and thus sound is produced (phonation) in mammals. However, loud sounds are not produced in rabbit. In human beings the speech is made by the joint action of vocal cords, tongue, pharynx, mouth and lips. In man, the larynx is somewhat protruded in the neck and called Adam’s apple.

Pair of lungs are the sole respiratory organs, which are situated in the thoracic cavity, one on either side of heart. The thoracic cavity in the mammals is completely separated from the abdominal cavity by a muscular septum, the diaphragm.

Each lung is enclosed and suspended in an air-tight compartment, called the pleural cavity. Its suspension is from the site of entry of bronchus and from this also pulmonary artery and vein, and nerves enter the lung. The pleural cavity is lined by peritoneum and filled with a watery pleural fluid.

Each bronchus enters into the lung of their side, divides and redivides into smaller secondary and tertiary bronchi. Their finer terminal branches of lesser diameter known as bronchioles. The bronchioles are without cartilagenous rings. Each bronchiole again divides repeatedly to form still finer branches, the alveolar ducts terminating into several small dilated blind air-sacs or infundibulum.

The wall of each air-sac is evaginated to form hollow air-cells or alveoli. The walls of alveoli are very much thin, formed of elastic connective tissue fibres and surrounded in a network of capillaries of the pulmonary artery and vein. Since the walls of the alveoli are richly supplied with blood capillaries, therefore, direct gaseous exchange takes place here.

The larynx continues posteriorly as the trachea or wind-pipe, which is a long tube running through the neck just ventral to the oesophagus. After entering the thoracic cavity, dorsal to the heart, its lower end divides into two primary bronchi – right and left. Each brochus enters the lung of its side.

The wall of the trachea and primary bronchi are supported by numerous C-shaped cartilaginous tracheal rings, which are incomplete dorsally but united by smooth muscles. The trachea is a flexible tube and its cartilaginous rings prevent the trachea from collapse and allow a free passage of air from both sides, i.e., outside the body into the lungs and vice-versa.

Internally the trachea and bronchi are lined by ciliated and mucous epithelium. Mucus keeps the inner surface moist and slimy. It also holds the bacteria and dust particles coming in with air. These are finally swept back to the pharynx by the upward beating of the cilia. 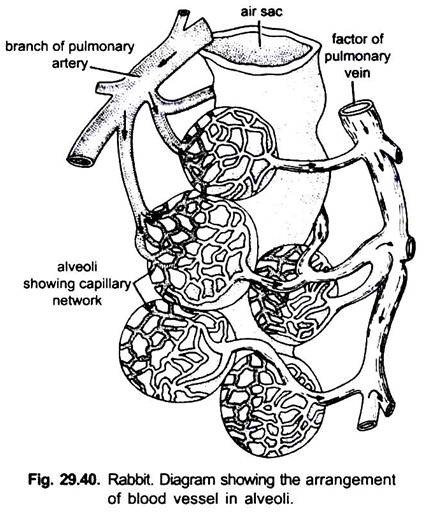 Mechanism of Breathing or Respiration:

The mechanism of breathing consists of intake of fresh air into the lungs (inspiration) and elimination of respired air from the lungs (expiration). The thoracic cavity with air-tight pleural cavities having lungs, is a basket or box-like structure formed dorsally by the vertebral column, ventrally by the sternum and by the ribs on the sides. 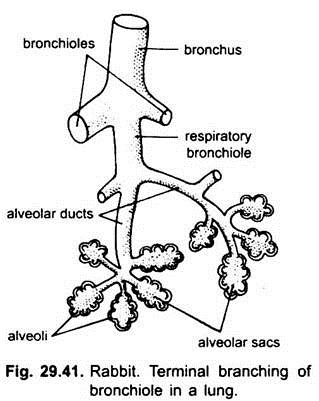 The mechanism of breathing can be divided into two stages:

The respiration is an active process during which fresh air is drawn in the lungs. It is done by the contraction of the obliquely arranged external intercostal muscles dragging the ribs and the sternum forwards and downwards. At the same time the radially arranged muscles of the diaphragm contract, thereby it becomes flattened. This results in the increase of the internal capacity of the thoracic cavity, thus, decreasing the pressure within the thoracic cavity.

It causes the lungs to expand, which causes the air to rush into the lungs due to more outside atmospheric pressure. The air rushes in through external nares → nasal passages → internal nares → glottis → trachea → bronchi → bronchioles and finally into the alveoli of the lungs. The outside air rushes in till the pressure of air in the lungs becomes equal to atmospheric pressure. Therefore, inspiration is the result of two movements- (i) flattening or lowering of the diaphragm and (ii) forward movement of the ribs and sternum. This is how inspiration occurs.

Gaseous exchange takes place in the alveoli where inspired air comes in contact with the blood capillaries through thin wall of alveoli. Oxygen from the air diffuses in the blood and CO2 from the blood diffuses out in the air simultaneously through the thin alveolar wall. 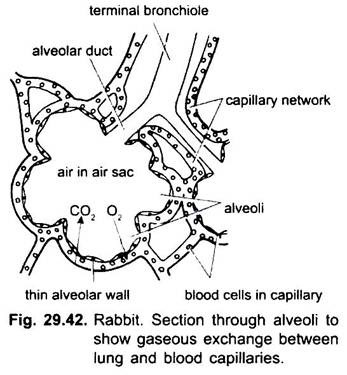 It is a passive process. During expiration, the internal intercostal muscles placed at right angles to external intercostal muscles contract and the later muscles also relax, thereby the ribs and sternum attain their normal position. At the same time the muscles of the diaphragm relax, bringing it in its normal dome-shaped position. Thus, the thoracic cavity and its volume decreases, producing a huge pressure on the lungs. Thus, the elastic walls of lungs shrink, expelling the respired air out through the same above path. 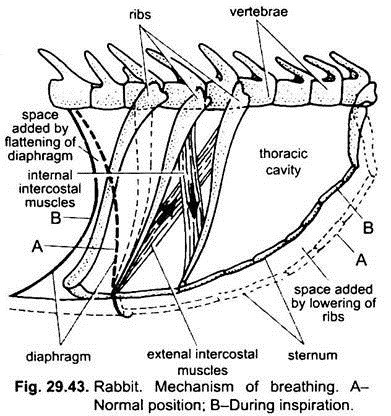 The lungs are never emptied completely during expiratory movements, as some air remains in it after each expiration, called residual air. It mixes with the incoming fresh air. Hence, in alveolar air the oxygen content is always lower and the carbon dioxide content is higher than that of atmospheric air. In comparison to birds, the mammalian respiration is less efficient.

The breathing mechanism actually involves the intake of oxygen and passing out of CO2, which constitute the external respiration. The actual use of oxygen in the body tissues for the oxidation of foodstuffs liberating energy and other metabolic wastes constitute the tissue respiration or internal respiration. Actually, the oxygen which diffuses in the blood combines with the haemoglobin of RBCs to form oxyhaemoglobin, such blood is known as oxygenated. 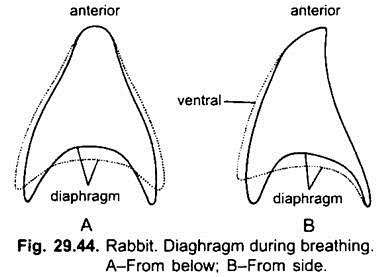 Thus, the oxygenated blood goes to the heart through the pulmonary veins from where it is circulated in the different parts of the body, finally reaching to the tissues of the organs. Here, the oxyhaeomoglobin gives up its oxygen and changes into haemoglobin.