Respiration can be defined as a process by which living beings obtain oxygen to oxidise their reserve digested food in order to release energy of which they are in constant need to maintain their existence by keeping their all other metabolic activities in order. In the course of this reaction carbon dioxide is also formed which is removed regularly from the body due to its injurious property.

Organs which help in the intake of oxygen and supplying it to the body tissues and removal of carbon dioxide constitute the respiratory system. Respiration in tadpole of frog occurs by means of gills as in fishes.

The skin of frog is very much suited for the respiratory function as it is very thin and richly supplied with blood capillaries and remains moist with the water and also mucus, secreted by mucous glands.

During gaseous exchange the oxygen first dissolves in the moisture present over the body and then diffuses into the blood circulating in the blood capillaries, while the resultant carbon dioxide passes out from the blood into the surrounding medium (water) by diffusion. In cutaneous respiration, no movements are needed because skin always remains exposed to air or water. 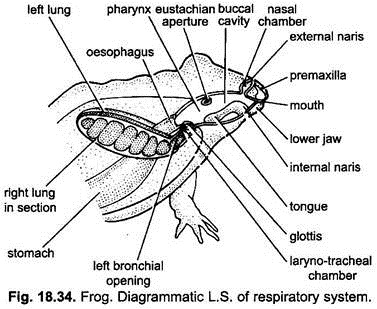 Respiration on land in air with the help of lungs is the pulmonary respiration. In frog, lungs are poorly developed. The intake of oxygen by lungs is not sufficient to the body. Therefore, oxygen intake through moist skin and buccal cavity is needed.

The organs of aerial respiration are a pair of lungs. The lungs are not only the organs of respiration but are also hydrostatic organs as they enable frog to float in water when they are inflated. The air enters and leaves the lungs through the respiratory fact.

It includes the external nostrils, nasal chambers, internal nostrils, bucco-pharyngeal cavity, glottis, laryngo-tracheal chamber and a pair of bronchi. The median slit-like glottis on the floor of pharynx opens into larynx (laryngo-tracheal chamber). Larynx is a small sac whose walls are supported by two arytenoid and one cricoid cartilages. Cricoid cartilage is a slender ring surrounding the larynx.

The arytenoid cartilages are a pair of semilunar valves, which rest upon the cricoid cartilage. Their upper edges form the lateral margins of the glottis. They afford attachment to muscles by which glottis may be opened or closed. The true sound producing organs are a pair of elastic bands, the vocal cords, extending longitudinally across the larynx.

Their median edges are thickened and lie near each other in the middle line. Sound is produced by the expulsion of air from the lungs which set the free edges of the vocal cords in vibration. Vibrations in the sound are caused by altering the tension on the cords through the action of laryngeal muscles.

The vocal apparatus of the male frog is much larger than that of the female. Vocal sacs found only in male frog serve as resonators to increase the croaking sound produced by the vocal cords. The larynx opens behind into a pair of very small tubes, the bronchi, which lead to corresponding lung. 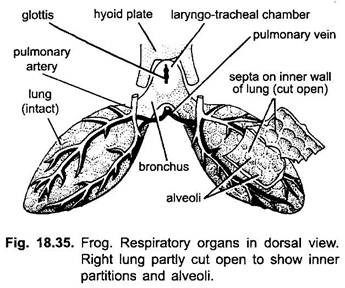 A pair of lungs are found in the anterior part of the body cavity, one on the either side of the heart. They are ovoid, thin-walled, elastic sacs with shallow internal folds or septa that increase the inner surface to form many chambers called alveoli. These are separated from each other through septa. The inner surface of the aveoli is covered with a single layer of epithelial cells which are very thin and flattened except on the edges of the septa where they are ciliated and cylindrical.

On the inner side of the epithelium there is aerolar type of connective tissue comprising blood and lymph vessels and unstriped muscle fibres which give remarkable power of contraction and expansion to the lungs. The outer surface of the lung is coated with coelomic epithelium called peritoneum. 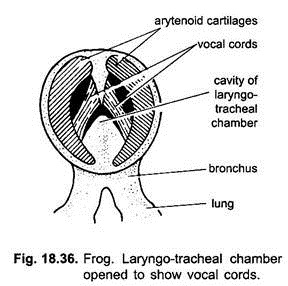 (i) Sternohyal muscles arise from the coracoid and clavicle or sternum and attached to the lower surface of the hyoid apparatus located in the floor of the buccal cavity.

(ii) Petrohyal muscles are attached on one end with the squamosal bone above and on the other side with the upper surface of hyoid apparatus.

During pulmonary respiration the air is forced into the lungs. This is aided by the movable premaxillae bones of the upper jaw situated just below the external nares and the foresaid muscles. 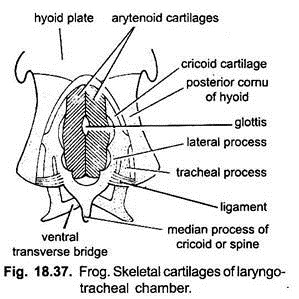 During inspiration the frog closes the glottis and mouth, and the nostrils remain open. On the contraction of the sternohyal muscles the floor of the buccal cavity along with hyoid is lowered increasing the volume of the buccal cavity. Thus, the air enters the cavity through the external nares.

Now the glottis opens and the Mentomeckelian bones of lower jaw push the premaxillae bones of the upper jaw upwards closing the nostrils. Now the petrohyal muscles contract, this results in lifting the hyoid apparatus along with the floor of the buccal cavity forcing the air to enter into the lung through the glottis. This drawing in of air into the lungs is called inspiration. 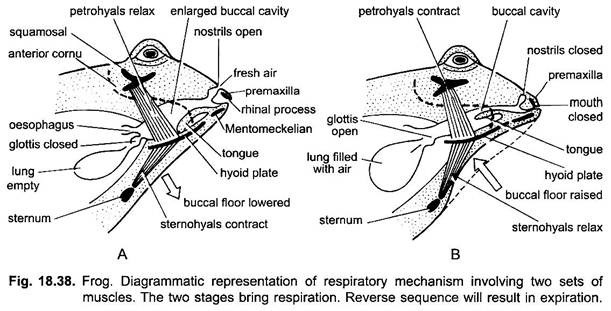 The erythrocytes (R.B.Cs.) of frog’s blood contain a respiratory pigment, the haemoglobin to which the respiratory gases (O2 and CO2) can combine temporarily only in high partial pressure. In the respiratory surfaces the O2 in the air is found in high concentration due to which it combines with haemoglobin of the blood to form oxyhaemoglobin.

It is transported by blood to the different tissues of the body where it dissociates due to less concentrations of O2 in the tissues and, thus, gives up most of its oxygen to the tissues. The resultant CO2 formed due to a series of chemical reactions is in high concentration in the tissue, therefore, it passes into blood which has low CO2 concentration. CO2 taken by the blood is passed out from the respiratory surface. The absorbed O2 oxidises the food to release the energy along with CO2.