Since the excretory and reproductive systems are closely associated, hence, it is customary to call the two systems together as a urogenital or urinogenital system, though both are unrelated functionally. In frog the sexes are separate.

The urinogenital organs can be studied under the following heads:

The excretory system in both male and female frog is similar. The excretion is mainly carried out with the help of a pair of kidneys, a pair of ureters, a urinary bladder and cloaca.

Both the kidneys are elongated, compact, flattened and dark red in colour. These are found in the lymph spaces (subvertebral lymph sinus) above the coelom attached on either side of vertebral column. In tadpole the kidneys are pronephros, whereas in adult these are mesonephros. These are covered ventrally by peritoneum. 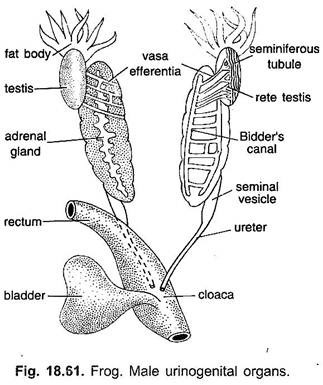 From the outer smooth convex posterior side of each kidney arises a mesonephric or Wolffian duct or ureter which passes backwards to open into dorsal side of the cloaca. The openings of the ureters are placed over a separate papilla on the dorsal side of cloaca. In male frog the ureters dilate just posterior to the kidney to form a vesicula seminalis in which sperms are stored.

In male frog the ureters convey the sperms and urine, and, hence, are called urinogenital ducts. The ventral surface of each kidney has a yellow coloured adrenal or supra renal gland of endocrine function. To the anterior of each kidney are attached numerous finger-like fat bodies, a testis in male and ovary in female. Fat bodies are reserves for nourishment.

It is large, thin-walled bilobed distensible structure. It also opens into the ventral wall of cloaca by a sphinctered aperture. Its aperture lies below and opposite to the openings of ureters. The inner surface of bladder is lined with a layer of epithelium about three cells thick. The middle layer of the bladder consists of a network of smooth muscle fibres and outside this layer is a thin sheet of connective tissue covered externally by the peritoneum.

It is a small, medium sac receiving the anus, urinogenital apertures and the opening of urinary bladder. Cloaca opens outside by a cloacal aperture placed at the posterior end of the body between the two hindlimbs. 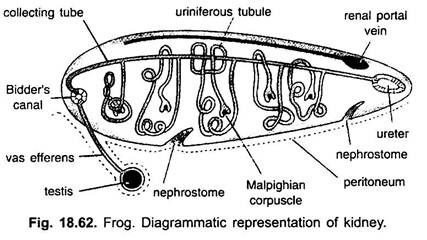 The kidneys are most of the red blood corpuscles. Each kidney is composed of a number of (about 2000) twisted renal or uriniferous tubules held together by connective tissue and richly supplied with blood vessels and their capillaries. Each renal or uriniferous tubule starts as a thin, double-walled ciliated cup, the Bowman’s capsule enclosing a bunch of blood capillaries, the glomerulus which receives blood from an afferent arteriole of the renal artery.

Uriniferous tubules are the functional units of kidney. These are lined with a glandular and at places with ciliated epithelium. From the glomerulus blood is collected by efferent arteriole which joins with a renal vein. The tubule gets the blood supply from the capillaries of efferent arteriole and renal portal vein. The Bowman’s capsule along with its glomerulus is called Malpighian body or corpuscle tubules. 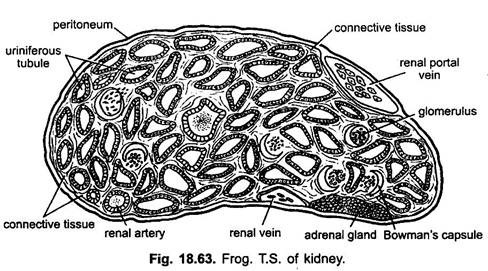 Each tubule opens into the collecting tubule which runs transversely across the kidney towards the dorsal surface. In turn all the transverse collecting tubules open into a longitudinal Bidder’s canal lying towards the inner margin of kidney and towards outer margin into the ureter. Ventral ciliated funnel-shaped nephrostomes. They carry wastes from the coelom into renal veins in frog or in uriniferous tubules in tadpoles.

Due to continuous catabolic activities certain substances are formed which are harmful to body, hence, their elimination is very essential which is done by the kidneys. The blood brings these substances into the kidneys through the renal portal veins. Blood comes to glomeruli from afferent arterioles which have a wider lumen then the capillaries so that the blood in glomeruli is under high pressure which causes filtration of blood. 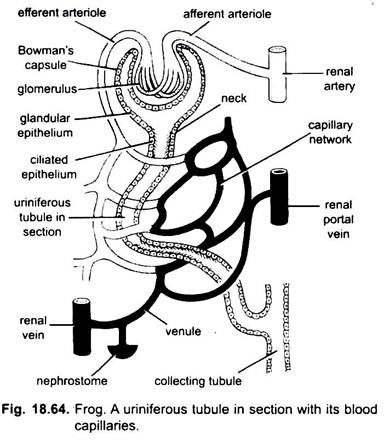 The glomerular filtrate does not contain corpuscles nor plasma proteins, it has plasma, wastes and crystalloids consisting of urea, inorganic salts, glucose and large quantities of water. The glomerular filtrate passes through the thin wall of the Bowman’s capsules into the lumen of uriniferous tubules and the filtered blood goes into renal vein through the efferent arteriole. 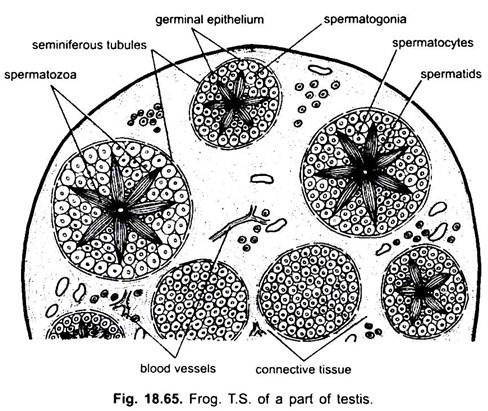 In the convoluted tubules selective reabsorbtion of useful substances takes place. The substances that are useful, such as glucose, amino acids, inorganic chlorides and some water are reabsorbed from the filtrate and put back into the blood of the capillaries of renal veins, while harmful substances such as urea and other salts along with water form urine which passes through the collecting tubes into ureters and goes to the cloaca. It is stored in the urinary bladder for a time. When bladder is full, its involuntary muscles contract, the urine is forced into the cloaca which is voided at intervals through the cloacal aperture. 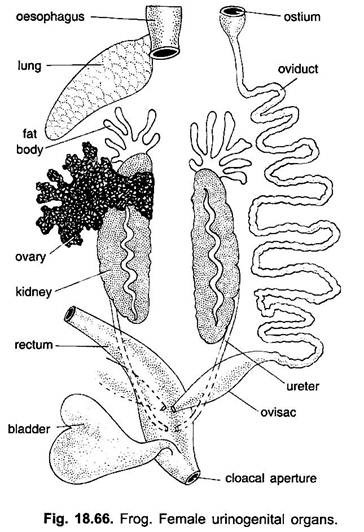 The testis are rounded or ovoid, light yellow bodies attached to the antero-ventral surfaces of the kidneys by a double fold of peritoneum, the mesorchium.

Actually each testis is surrounded by peritoneum, which is extended dorsally as a double membrane, the mesorchium, to the dorsal side of the body cavity, where its becomes continuous with the general coelomic lining. Just in front of each testis are found attached yellowish finger-like processes. They serve as a sort of storehouse of nutrients which are provided to the developing spermatozoa and during hibernation.

The vasa efferentia consist of a variable number of slender tubes arising from the inner margin of testis and extend within the mesorchium and then enter the inner margin of the kidney to open into the Bidders, canal. The Bidders’ canal communicates with the ureter through collecting tubules of kidney. In this way sperms enter the ureter of kidney through vasa efferentia. Bidders canal and collecting tubules. The vasa efferentia are originally outgrowths of the walls of the Malpighian corpuscles which become connected with the testis.

Ureter in male frog is a urinary duct as well as a vas deferens to convey the urine and spermetozoa. Hence, it is called a urinogenital duct. Both the ureters open into the dorsal wall of cloaca separately on urinogenital papillae.

Histological, each testis (Fig. 18.65) is composed of a large number of seminiferous tubules held together by connective tissue. In the connective tissue are found blood capillaries and lymph vessels, nerves, muscle fibres and groups of interstitial cells in between the lubules. These cells secrete a hormone testosterone which brings the secondary sexual characters of the individual. The wall of tubule is lined by germinal cells which produce sperms by spermatogenesis. The mature sperms are found in bundles in the lumen of tubules floating in the spermatic fluid.

The excretory organs are the same in female frog as found in male frog, but they do not have any connection with the reproductive organs. The ureter does not dilate as vesicula seminalis and no ducts from ovaries open into the kidneys. The cloaca serves as a common passage for urinary and genital systems as in the male frog.

Female reproductive system (Fig. 18.66) includes a pair of ovaries and a pair of oviducts.

Both the ovaries are attached to the dorsal abdominal wall, close to the kidneys, by a fold of peritoneum called mesovarium. The ovaries are large, lobulated hollow sac-like structures. In breeding season the ovaries become greatly enlarged. Histologically, the wall of each ovary (Fig. 18.67) is composed of visceral peritoneum which forms germinal epithelium and internal to it is the fibrous connective tissue having blood vessels, muscle fibres and nerves. 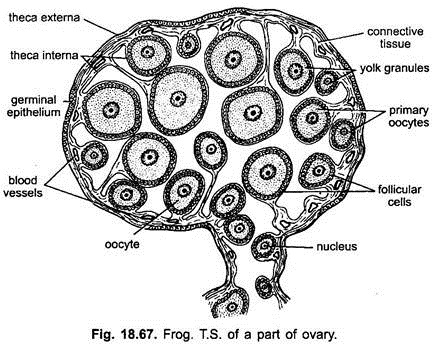 The germinal epithelium gives off several small groups of cells or oogonia which form ovarian follicles. Within each follicle a central cell enlarges forming ovum. It contain a nucleus and granular yolky cytoplasm. The remaining follicle cells form the follicular epithelium around the ovum. Later with the maturation of ovum, follicular epithelium is replaced by vitelline membrane secreted by the ovum. In front of each ovary are attached fat bodies. 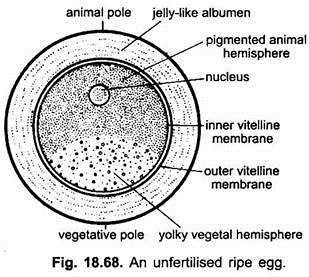 On each side is a long and much coiled glandular and ciliated oviduct or Mullerian duct. It starts near the base of the lung by a thin-walled ciliated coelomic or oviducal funnel. At the posterior end near cloaca, each oviduct dilates to form a thin-walled ovisac called uterus which opens by a narrow aperture on a papilla in the cloaca.

The cilia of the oviduct direct the eggs posteriorly and the glands secrete albuminous coat around each egg during their descent. Oviducts become much enlarged and coiled just before the breeding season. The eggs escape from the surface of the ovary into the coelom and are directed by cilia into the oviduct and are temporarily stored in the ovisacs.

Each egg is spherical and about 1.75 mm in diameter. Its upper black pigmented half is the animal hemisphere containing nucleus and the lower half containing white yolk is the vegetal hemisphere. Egg is enveloped into a thin vitelline membrane and outer to it is the thick albuminous coat.