The blood vascular system of frog is closed. It includes the heart, blood vessels, blood and lymphatic system. The prime function of this system is to distribute the digested food and oxygen to different parts of the body, in order to release energy to carry out life activities and also to bring the excretory and gaseous wastes to organs of elimination, i.e., kidneys and lungs.

The heart is a muscular pumping organ pushing the blood into the closed circulatory system. 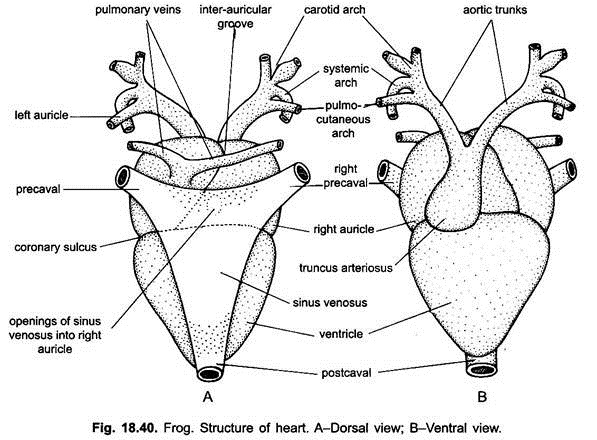 The heart of frog is a dark red coloured conical muscular organ situated ventrally to the liver in the pericardial cavity along the mid-ventral line at the level of forelimbs.

The heart is enclosed within a sac formed of two membranes, an outer pericardium and an inner epicardium which closely invests the heart. Between these two membranes a serous or pericardial fluid is found which prevents friction and also keeps the heart moist. It also protects the heart from outer shocks.

(b) Chambers of Heart:

The two auricles, however, are clearly separated from the ventricle by a transverse coronary sulcus or auriculo-ventricular groove. The ventricle is the most conspicuous and prominent part of the heart. It is conical in shape with thick muscular walls. Besides auricles and ventricle, the heart has two more chambers—truncus arteriosus and sinus venosus.

Truncus arteriosus arises from the ventral upper right side of the ventricle as a cylindrical structure, which extends forward obliquely across the right auricle and finally divides into two branches or trunks, each further divides into three arches—carotid, systemic and pulmocutaneous. Sinus venosus lies on the dorsal surface of the heart. It is a thin-walled dark-coloured somewhat triangular chamber which is formed by the union of three caval veins two anterior, precavals and one posterior, postcaval. 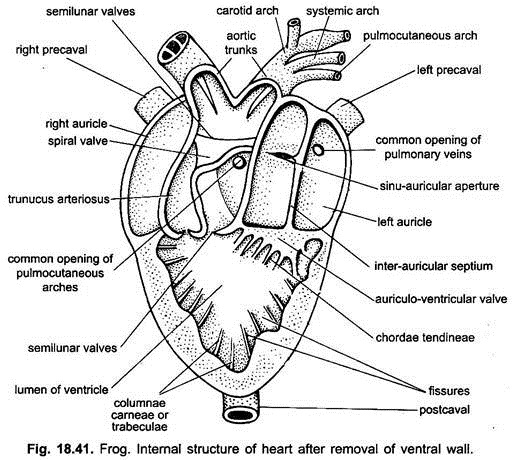 Internally the heart is three-chambered with two auricles and one ventricle. The blood flows only in one direction through various chambers. Their openings are guarded by valves.

The two auricles, right and left, are separated from each other by thin vertical inter-auricular septum. Left auricle is smaller than the right. In the right auricle close to the septum there is a transverse oval opening called sinu-auricular aperture through which blood enters into the auricle from the sinus-venous. It is guarded by two lip-like sinu-auricular valves, one arising from the dorsal edge and the other from the ventral.

These valves allow the free flow of blood only into the right auricle but prevent the backward flow of the blood. In the left auricle slightly anterior to the sinu-auricular aperture but close to the septum there is a small opening of pulmonary vein which has no valve. The two auricles open into a single ventricle by an auriculo-ventricular aperture which is bounded by two pairs of auriculo-ventricular valves, one arising from the dorsal edge and the other from the ventral edge of this aperture.

The ventricle is a most conspicuous triangular chamber of the heart with muscular walls. Its inner surface has irregular ridges, the columnae carnae with deep pockets between them, which to some extent prevent the mixing of the blood from the two auricles. These ridges reduce the lumen of the ventricle. The flaps of auriculo-ventricular valves are attached to the wall of ventricle by thread-like chordae tendinae. 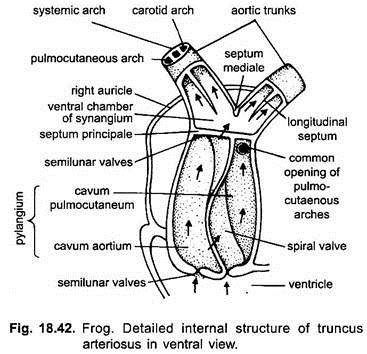 From the upper right side of the ventricle arises a tubular truncus arteriosus. Its opening is guarded by three semilunar valves, whose edges are directed towards the truncus. On contraction of the ventricle these valves are pushed apart and make a free passage for the blood from the ventricle into truncus but they prevent the backward flow of blood into the ventricle.

The truncus arteriosus is formed of a basal thick-walled conus arteriosus and a distal thin-walled ventral aorta. Its conus arteriosus part which is next to the ventricle is known as pylangium and the distal ventral part as synangium. Pylangium is a short tubular structure, while synangium is simply formed by the union of the basal parts of the arteries.

The distal end of pylangium or the conus arteriosus is also provided with a row of semilunar valves which actually mark the boundary line of the pylangium and synangium. One of these valves has been modified to form a large spirally twisted spiral valve which incompletely divides the cavity of conus arteriosus into two passages, a dorsal and left cavum pulmocutaneum and a ventral and right cavum aorticum, both of which communicate with the ventral aorta.

In front of the ventral aorta the truncus arteriosus divides into two halves, each half is further divided into a carotid arch, systemic arch and a pulmonary arch. Immediately anterior to the spiral valve, is an aperture leading to the pulmocutaneous arch. This aperture is guarded by two valves, one dorsal and one ventral pulmocutaneous valves.

(iii) Working of the Heart:

In the wall of the sinus venosus there is a pacemaker called sinu-auricular node which initiates the heart to contract. Because the muscles of the auricles are continuous with those of the ventricle, therefore, the wave of excitation or contraction starts from the sinus venosus and ends at the truncus, thus, these chambers contract in sequence.

The flow of blood in the heart is explained by two theories:

According to old theory of Brucke (1851), and confirmed by Sabatier (1873), the left side of ventricle receives oxygenated blood from the left auricle, while the right side receives deoxygenated blood from right auricle. The mixing of the blood is avoided in the ventricle because of the viscous nature of blood and the spongy texture of the ventricle due to the presence of columnae cameae.

Thus, there is an impure blood in the right side, pure in the left side and in the middle, however, mixing of two bloods takes place. On contraction of the ventricle, first the impure blood from the right side goes into the truncus arteriosus.

According to new theory propounded by Vandervael (1933) and Foxon (1953), the blood coming into auricles whether from lungs or sinus venosus is all oxygenated because oxygenation of blood takes place not only in the lung but also in the skin and the buccal cavity. It means the blood which comes into sinus venosus from skin and buccal cavity is equally oxygenated, if not more.

On contraction of the two auricles the blood comes into ventricle where the two get completely mixed up. This mixed blood is distributed to all parts of the body through the common carotid, systemic, and pulmocutaneous arches.

The spiral valve takes no part in turning the blood, it only supports the conus arteriosus and prevents it from collapsing. The carotid labyrinth does not raise the pressure of blood but it is sensory and detects pressure changes of oxygen in the blood. The above explanation of flow of the blood in the heart is widely accepted now-a-days.

DeLong (1962) indicated that the carotid arches get oxygenated blood, pulmocutaneous arches lesser oxygenated blood and the systemic arches mixed blood. The precise mechanism is not understood.

The blood vessels which carry oxygenated blood (in most of the cases) away from the heart to different parts of the body are called arteries. They have thick and more elastic walls.

Each artery is made of three concentric layers:

It is the innermost layer which is made of flat endothelial cells. Internally it is lined by an elastic membrane.

It is the middle layer which is simply made of circularly disposed off smooth or unstriated muscle fibres and elastic connective fibres. It is greatly developed, therefore, the arteries are non-collapsible,

It is the outermost layer which is made of loosely arranged elastic and collagen fibres.

They are found abundantly in those tissues or organs where extensive metabolism occurs, such as muscles and glands but few or even altogether absent in tissues where metabolism does not occur or is very slow such as cartilage and epithelia. The structure of the capillaries depends on their function. Because these bring blood into the closest possible relation with the surrounding tissues, their walls are extremely thin.

They lack both tunica media and tunica externa or adventitia, having only the innermost layer of flat endothelial cells called tunica intima. Their walls are so thin that an exchange of food material, gases and waste takes place between the blood and the tissue under pressure.

From the fine capillaries the blood passes into thin venules, thence into veins by which it is finally returned to the pumping centre, the heart. The veins, thus, start with capillaries. They are always thin-walled and collapsible. They are (in most of the cases) provided with semi­lunar valves which prevent the backward flow of the blood.

Generally the flow of blood in the veins is always much slower than in the arteries because the blood, as it comes into the veins, the pressure is very much reduced. So in veins the onward flow of the blood is maintained by the semi-lunar valves, contraction of the muscles of the body and by the sucking activity of the heart.

The veins have almost the same structure as that of arteries. It means they are also made of all the three layers but these layers are very thin, consequently the walls of the veins are comparatively thin than the arteries of the same size, but they are more elastic. In veins the muscles and elastic connective tissues are less developed, while the collage fibres of the outer layer are greatly developed in arteries. In most veins the tunica media is found without muscles, while tunica externa makes up the greater part of the wall.