In this article we will discuss about the blood vascular system of garden lizard with the help of suitable diagrams.

Heart of the garden lizard (Calotes) is placed in the anterior part of the pleuroperitonial cavity. The heart is enclosed in a thin transparent membrane, the pericardium, which is lined with endocardium, thus, it is two-layered. The space between the heart and pericardium is filled with pericardial fluid. The heart is triangular in shape and three-chambered-two auricles and a ventricle.

The right auricle is larger than the left auricle. Both the auricles are clearly marked from the posterior ventricle by a transverse auriculo-ventricular groove. Truncus arteriosus is absent. The thin-walled and bilobed sinus venosus is reduced and placed transversely and dorsal to the right auricle. It is formed by the fusion of the three venae cavae.

These three venae cavae empty independently into the sinus venosus. There are no valves. The smaller left lobe of sinus venosus is formed by the left precaval, while the larger right lobe is formed by the union of right precaval and the postcaval. The apex of the ventricle is attached with the liver by a thin, white cord of tissue, the gubernaculum cordis.

Both the auricles are internally separated by a thin, complete inter- auricular septum. The left auricle is smaller and receives the single pulmonary vein on its dorsal wall. Its aperture has no valve. The right auricle is larger and its inner wall is raised internally into smaller ridges, the musculi pectinati.

The ventricle is thick-walled, muscular, spongy and triangular in shape. Its cavity is incompletely divided by an inter-ventricular septum into right and left halves or cavum pulmonale and cavum dorsale respectively. Its inner layer is projected into interlacing ridges called columnae carneae.

Both the auricles open into ventricle through right and left auriculo- ventricular apertures guarded by auriculo-ventricular valves. The flaps of these valves are attached to columnae carneae by thread-like muscles, the chordae tendineae. From the ventricle arise three arches- right and left systemic and pulmonary. The openings of these arches are guarded by paired semilunar valves to check the return of the blood.

While the deoxygenated blood from the cavum pulmonale passes into the pulmonary arteries for reoxygenation in the lungs. The blood in the right part of the cavum dorsale goes into the left systemic arch and probably passes through the ductus caroticus on that side into the carotid.

From the ventricle of the garden lizard (Calotes) arise three aortic arches:

2. A pair of systemic arches.

These three arches are twisted around each other at the base and covered by a fibrous sheath.

It arises from the right portion of the ventricle (i.e., cavum pulmonale) and soon splits into two pulmonary arteries, each entering into a lung. It carries deoxygenated blood.

2. A pair of Systemic Arches:

The common subclavian arises from the right systemic arch and it divides into right and left subclavian arteries which supply blood to the forelimbs.

It also arises from the right systemic arch supplying blood to the vertebral column.

It runs backwards mid-dorsally and gives off the following branches:

It arises from the central surface of the dorsal aorta.

These vary from 4 to 8 pairs to stomach.

It runs obliquely backward to supply the intestine.

It runs anteriorly to supply the pyloric stomach.

It arises from the right side of dorsal aorta and runs obliquely backward to supply the gall-bladder and intestine after bifurcation.

A pair, right and left, to the gonads (testes or ovaries).

More than one pair of renal arteries to the kidneys.

One pair, right and left, runs backward to the hindlimb of its own side. From each a pelvic artery arises to supply the pelvic girdle. Later, each branch bifurcates into external and internal iliacs to the leg. Before bifurcation it gives off a slender vesicular branch to the bladder.

Each precaval is formed by the union of 2 veins:

(i) External jugular brings the blood from the floor of the mouth and tongue,

(ii) Internal jugular drains the blood from the brain and

(iii) Subclavian draining the blood from the forelimb.

The right precaval also receives an azygos vein from the ventral thoracic wall.

A median caudal vein brings blood from the tail and after entering the body bifurcates into a renal portal vein which capillaries into the kidneys. From each renal portal vein arises a pelvic vein, which receives femoral and sciatic veins from the hindlimb. Both the pelvic veins unite in front of kidneys to form a median epigastric or anterior abdominal vein that enters into, liver and breaks up into capillaries. 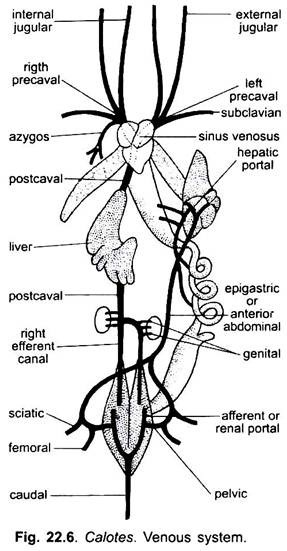 The hepatic portal vein is formed by the branches from stomach, intestine, pancreas, etc., and it enters into the left lobe of liver to break Pulmonary vein. From each lung the blood are carried pulmonary veins unite to form a common pulmonary vein to veins carry oxygenated blood to the heart.

The Garden Lizard (Calotes), like other reptiles, is cold blooded or poikilothermous.

The lymphatic system is exceptionally well developed and with large vessels. There are no lymph nodes but large cisterns are found at the sites where nodes are found in birds and mammals. Lymph is pumped by paired lymphatic hearts to a large cisterna chyli in the abdomen and from there passes through thoracic ducts, forming sheaths around the aortae, to enter the base of the subclavian and jugular veins.