In the Garden Lizard (Calotes), sexes are separate but not easily distinguishable externally.

In male garden lizard, testes are two oval white bodies. The right testis is situated just posterior to the right lobe of the liver, and the left testis is located somewhat farther posterior. Each testis is attached to the dorsal bodywall by a fold of the peritoneum, the mesorchium.

Both the vasa deferentia open independently into the cloaca over a small papilla, and before opening into the cloaca, each receives the ureter of its own side. Thus, this common duct is called the urino-genital duct through which passes the urine as well as sperms. 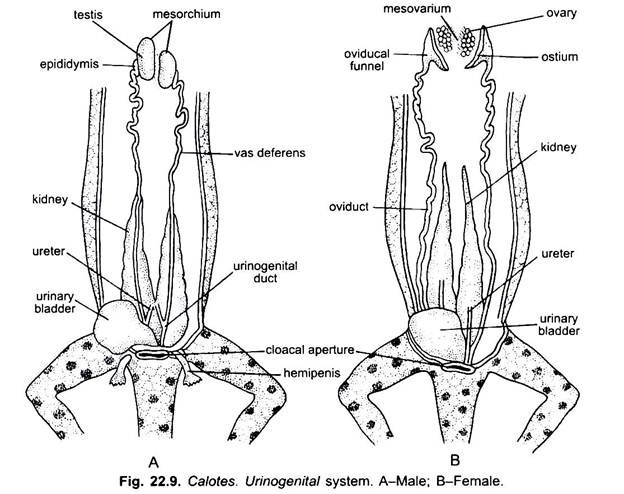 The two grooved penial structures arise from the proctodaeum as eversible folds. These are vascular and erectile, and assume a cylindrical form when everted. Each has a dilated apex and is used singly and independently of the other for the discharge of sperms into the female tract.

This includes a pair of irregularly oval-shaped ovaries. Their surfaces are raised up into rounded elevations marking the position of the oocytes. They are situated in the abdominal cavity and each is attached to the dorsal bodywall by a fold of peritoneum, called the mesovarium.

A pair of thin-walled, wide oviducts is also present and these are attached to the dorsal body- wall by a fold of peritoneum, the broad ligament. The anterior end of each oviduct is wide, funnel-shaped, ciliated and lies close to the corresponding ovary.

Both the oviducts open into the urodaeum, a little in front of the ureters. The eggs are extruded into the body cavity and pass into the anterior ends of the oviducts. The lower part of each oviduct is slightly dilated, called the uterus. Here the eggs are stored for a short time before laying. The walls of the oviducts are glandular, their anterior end bears albumen glands and the posterior part bears shell glands.

Fertilisation of eggs takes place in the anterior part of oviduct. The eggs are heavily yolked and are enveloped by calcareous shell.