In this article we will discuss about the respiratory system of toad.

Two modes of respiration are observed in the life-history of toad-terrestrial respira­tion, and aquatic respiration.

(i) Terrestrial mode of Respiration:

Toad is capable of taking in air by the lungs and skin. Respiration with the help of lung is called pulmonary respiration and that with the skin is called integumentary or cutaneous respiration. 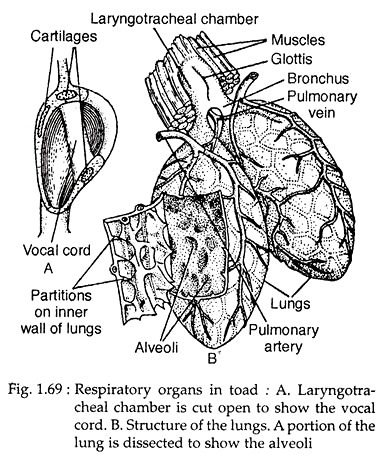 Sound is produced by the vibration of the vocal cords which also control the inten­sity and pitch of the sound. The vocal sac in male helps to intensify the sound by acting as the resonator. The laryngotracheal chamber gives off two extremely short bronchi.

Each bronchus opens into a thin-walled spongy lung. Internally, the lungs have innumerable simple sacs (Fig. 1.69B) known as alveoli (or air-sacs). Each alveolus is a highly vascu­lar structure and the alveolar epithelia are actually the centres of exchange of gases.

During the process toad clo­ses its mouth but the external nostrils are kept open (Fig. 1.70A). The floor of the buccal cavity is then lowered. As a result of lowe­ring of the floor, partial vacuum is created and thus fresh atmospheric air rushes into the buccal cavity through the nostrils. The glottis remains closed, so air cannot enter the lungs.

Aspiration is quickly followed by expiration. The trunk muscles contract upon the lungs and cause expulsion of air from the lungs to the buccal cavity through glottis. This expelled air is rich in carbon dioxide. As a result of inhaled and expelled air, the buccal cavity becomes highly distended. Mixture of these two types of air now goes out through the open nostrils.

The mucus membrane lining the buc­copharyngeal cavity is always kept moist and is highly vascular. Through this mem­brane exchange of gases occurs normally.

The skin of toad is moist and richly supplied with blood vessels. It acts as an additional respiratory organ. Cutaneous breathing is a continuous process and is very important specially dur­ing hibernation. Exchange of gases occurs through the skin by diffusion.

The early phase of the life cycle of toad is spent in water. Tadpoles are the larval forms which respire by means of external and internal gills in addition to skin. The exter­nal gills are the epithelial extensions and con­tain blood capillaries. The gills can absorb oxygen dissolved in water and give out car­bon dioxide.

Oxygen is conveyed to the different tissues by the blood. Oxygen combines with the haemoglobin to form an unstable compound oxyhaemoglobin. In this state, oxygen reaches the cells and the oxy­haemoglobin releases oxygen and regains its former state. Carbon dioxide is transported by the blood plasma in the form of bicarbonates and finally expelled through the respi­ratory surface. This cycle is repeated.