The nervous system of rabbit consists of three divisions:

1. The central nervous system including brain and spinal cord.

2. The peripheral nervous system including nerves coming out from the brain and spinal cord, i.e., cranial nerves and spinal nerves.

The brain of rabbit is essentially made on the same plan as that of the frog and other vertebrates but in rabbit is more complicated. The brain is found enclosed in the cranial cavity of the skull.

Brain is surrounded by 3 membranes which are collectively known as meninges. In rabbit these membranes are piamater, arachnoid layer and duramater. The piamater is a thin highly vascularised membrane closely applied with the brain.

The duramater is the outermost tough membrane applied with the inner surface of the cranial cavity. The arachnoid layer is situated in between piamater and duramater. Both above and below the arachnoid layer there are spaces called subdural cavity and subarachnoid cavity respectively. These are crossed by fibres.

The brain of rabbit can be divided into three regions:

(a) The forebrain or prosencephalon,

(b) The midbrain or mesencephalon, and

(c) The hindbrain or rhombencephalon. Their parts are the same in all the vertebrates.

It consists of a pair of olfactory lobes, a pair of cerebral hemispheres and an unpaired diencephalon.

Each olfactory bulb gives off an olfactory nerve. Each olfactory lobe has a narrow cavity, called the rhinocoel (I ventricle). These lobes are responsible for controlling the sense of smell. 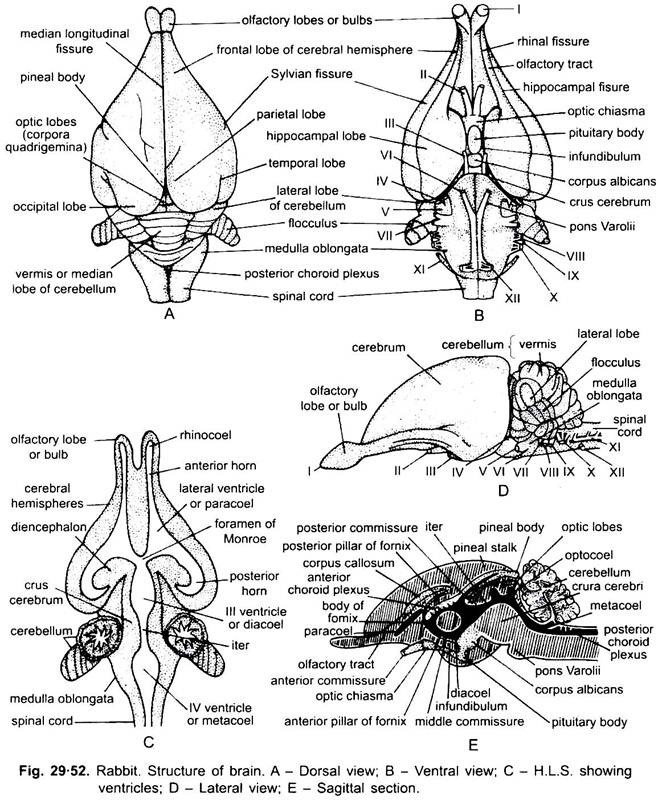 The cerebral hemispheres or telencephalon are well developed and form about 2/3 of the whole brain. They are narrow in front and broad behind, and their surface is nearly smooth. They extend backwards, covering the diencephalon and mid­brain and almost touch the cerebellum.

They partly cover the olfactory lobes anteriorly. Dorsally a deep longitudinal median fissure separates the two cerebral hemispheres. The hemispheres are further divided into many lobes by fissures.

Internally both the cerebral hemispheres are connected by a dorsal broad transverse band of nervous tissue, called the corpus callosum (characteristic of placental mammals). The cavity of each cerebrum is called the paracoel or lateral ventricle or II ventricle. Both the cavities are connected with each other and also with the diacoel through a narrow passage, called the foramen of Monro.

The roof of paracoel is formed of corpus callosum and floor, and lateral walls by corpus striatum. Both the corpora striata are connected by a transverse anterior commissure.

The diencephalon or thalamencephalon is narrow, rectangular, lies below and covered by the posterior extension of cerebral hemispheres. From the dorsal side of diencephalon arises a slender pineal-stalk having a terminal rounded pineal body. Remaining part of the roof (dorsal side) is non-nervous and highly vascular. It is called the anterior choroid plexus.

On the ventral side the floor of diencephalon gives off a median rounded infundibulum, which carries an oval Rathke’s pouch or hypophysis. Behind it is attached a small rounded corpus albicans. Infundibulum and hypophysis together form the pituitary body. In front of the infundibulum is present the optic chiasma formed by the crossing of two optic nerves.

The cavity of diencaphalon is called the diacoel or III ventricle. The roof of diacoel is called epithalamus, floor is hypothalamus and the lateral thickened walls are optic thalami (singular is thalamus). Optic thalami are connected with each other by a transverse middle commissure occupying the greater part of diacoel. It is formed of only nerve cells without fibres.

The centre of autonomic nervous system lies in diencephalon. It controls the different chemical activities regarding the metabolism of carbohydrates, fats and proteins. The temperature of the body and reproductive activities are controlled by this part of the brain.

Its floor is formed of thick longitudinal bands of nerve fibres called the crura cerebri. These connect the forebrain with the hindbrain. The optic lobes are the centre of sense of sight. Crura cerebri control the activity of muscle fibres.

It consists of the cerebellum or metencephalon and medulla oblongata or myelencephalon.

The cerebellum of rabbit is well developed and consists of a large median lobe called vermis, two lateral lobes situated on the sides of the vermis and two floccular lobes situated on the ventro-lateral sides of the lateral lobes. The surface of the cerebellum is thrown out into a number of folds, therefore, increasing the area of grey matter. Cerebellum has no cavity. It is responsible for maintaining the equilibrium and it coordinates the voluntary muscular movements.

The ventral surface of cerebellum has strong transverse bands of fibres connecting the right and left halves of cerebellum. It is called pons Varolii.

The medulla oblongata is the posteriormost part of the brain which is broad and triangular anteriorly but gradually narrows posteriorly so as to form the spinal cord. Its cavity is called the metacoel or IV ventricle. It continues into the central canal of spinal cord. The roof of the metacoel is non-nervous and vascular which forms the posterior choroid plexus. Medulla oblongata and pons Varolii control the involuntary activities of the body, such as digestion, respiration, excretion and circulation, etc.

Ventricles of the Brain:

The lateral ventricles of the hemispheres and diacoel are connected with each other through foramen of Monro. A narrow passage, the iter or Sylvian aqueduct, is found in the midbrain which connects the diacoel with the 4th ventricle or metacoel. The 4th ventricle is the cavity of the medulla oblongata which is broader anteriorly but gets narrower posteriorly. 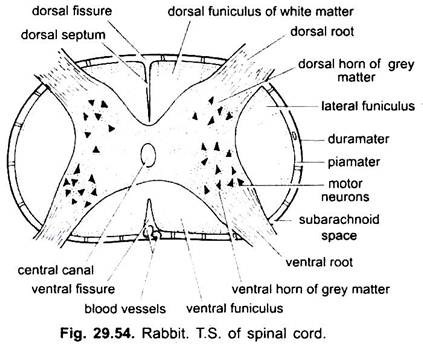 The spinal cord is the continuation of the medulla oblongata after coming out of the cranium through foramen magnum. It runs through the neural canal of the vertebrae and terminates behind in the lumbar region as filum terminate. The spinal cord is white, thick- walled tube formed of nervous tissue. The filum terminate is a thread-like non-nervous structure.

The spinal cord is swollen at the levels of fore-and hindlimbs, which are called brachial and sciatic swellings respectively. These swellings give off nerves to the fore-and hindlimbs. There are two median longitudinal fissures, one on its dorsal surface, called mid-dorsal fissure, and the other on its ventral surface, called mid-ventral fissure. The 4th ventricle of the medulla is continued in the spinal cord as central canal, which is filled with the cerebro-spinal fluid. 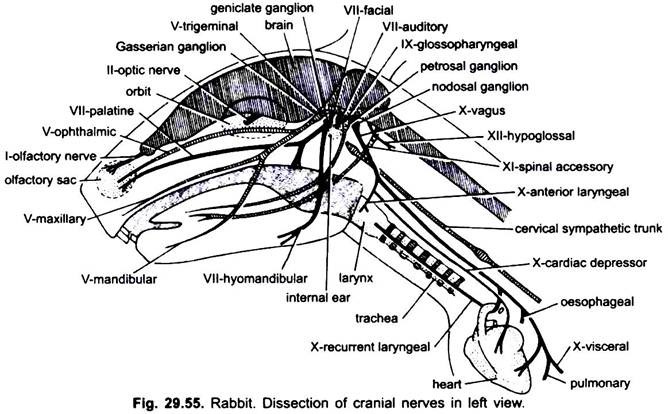 The structure of spinal cord can be well explained with the help of its transverse section. In T.S. it appears to be a more or less spherical structure having a central canal in its centre. It is composed of a central grey matter with nerve cells (neurons), which seems to be a butterfly-­like or H-shaped structure. The grey matter is projected into the dorsal and ventral horns. This grey matter is surrounded by the white matter formed of medullated nerve fibres.

The white matter is distinctly divided into two compartments by a dorsal fissure and a narrow dorsal septum extending up to central canal and a broad, deep ventral fissure. The white matter of each compartment can be further distinguished into dorsal, lateral and ventral columns, i.e., dorsal funiculus, lateral funiculus and ventral funiculus respectively, due to the characteristic shape of the grey matter. The spinal cord provides passage for the impulses to and from the brain. It plays an important role in reflex actions.

The spinal nerves in rabbit are 37 pairs which can be divided into five zones, viz., 8 pairs cervical, 12 pairs thoracic, 7 pairs lumbar, 4 pairs sacral and 6 pairs caudal nerves. Each arises from the cord by two roots- dorsal and ventral.

The dorsal and ventral roots unite in the neural canal and come outside the vertebral column through intervertebral foramen as a single nerve of mixed nature. It now immediately divides into three branches (rami)- dorsal, ventral and visceral. The dorsal ramus innervates the skin and muscles of back.

The ventral ramus goes to the ventro-lateral parts of the body. The visceral or ramus communicans unites with the sympathetic system and innervates the viscera. The 1st, 2nd and 3rd spinal nerves of the cervical region supply the skin by their ramus dorsalis and to the muscles of the neck by their ramus ventralis.

The ventral rami of 4th, 5th, 6th cervical nerves of the neck region meet to form a network, called cervical plexus. It sends a phrenic nerve to muscles of diaphragm. The 5th, 6th, 7th and 8th cervical nerves and the first thoracic nerve in the region of forelimbs anastomose together to form a brachial plexus. The 4th, 5th, 6th and 7th lumbar nerves and the 1st, 2nd and 3rd sacral nerves in the region of hindlimbs unite to form sacral plexus or lumbo-sacral plexus.

There is a pair of ganglionated sympathetic nerves or cords which arise from the brain and pass out the cranium through carotid canals and extend from the neck to the end of the abdomen situated at the lateral sides of the vertebral column and enter the tail as a fine filament. 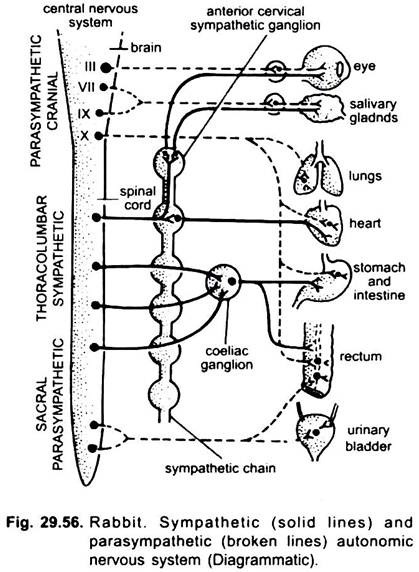 In short the animal exhibits symptoms of fear or anger and is made ready to fight or flight. Sympathetic fibres are adrenergic or sometimes (as in sweat glands) cholinergic. Opposite to sympathetic action, parasympathetic stimulation leads to dilation of blood vessels (except intrinsic coronary circulation of heart), increased salivary secretion, constriction of bronchi, increased peristalsis, relaxation of sphincter, constriction of pupil. Parasympathetic fibres are cholinergic.