In Branchiostoma, nervous system is simple, having no brain as found in higher chordates. 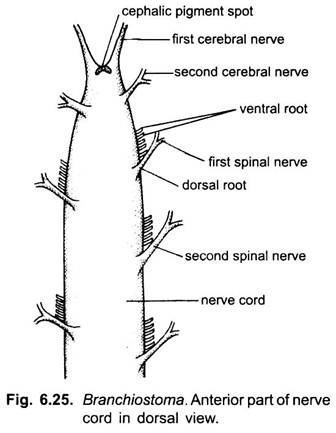 From the anterior part of the neural tube (cerebral vesicle) arise two pairs of sensory nerves going to the oral hood cirri and sense organs. These nerves are called cerebral nerves and lack ventral roots. The body behind the cerebral vesicle gives off spinal nerves in segmental pairs.

Each spinal nerve has a dorsal root with afferent sensory fibres entering, and a ventral root made of several separate efferent motor fibres leaving the neural tube. The dorsal roots come from the skin and is of mixed type (i.e., sensory and motor) whereas, the ventral roots are motor and go to myotomes.

There is an autonomic nervous system having two nerve plexuses in the smooth muscles of the wall of the intestine. These are connected to the neural tube by visceral nerves (preganglionic) through the dorsal roots. The autonomic nervous system is ap­parently represented only by the parasympathetic system; it controls the unstriped muscles of the gut. 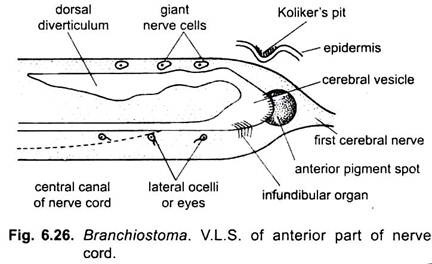 Simple eyes or ocelli are rows of black pigmented spots along the entire length of the ventro-lateral sides of the neural tube. They are arranged in definite tracts and are sensitive to light. Each eye has an outer pigment cell or melanocyte and a lens­-like photosensitive cell with a striated apical border or vitreous body which secretes a pigmented cap. It acts as a lens. The photosensitive cell receives one nerve fibre from the nerve cord. The light-sensitive eyes are responsible for orientation of the animal as it burrows in sand.

Pigment spot is a large pigmented spot in the extreme anterior wall of the cerebral vesicle. It lacks the structure of an eye and has no sensory function, But when the animal burrows with its anterior end projecting, then the pigment spot shields the eyes from frontal stimulation by light and probably acts as a thermoreceptor.

Infundibular organ is a depression in the floor of the cerebral vesicle. It is lined by long ciliated epithelial cells. Internally it gives out a Reissner’s fibre which enters into the neurocoel. It detects changes in the pressure of the fluid in the neural tube.

Kolliker’s pit or olfactory pit is a pocket of ciliated ectoderm cells above the cerebral vesicle slightly to the left side. It marks the position of neuropore by which the neural tube opens anteriorly in the larva, but the neuropore closes in the adult. Kolliker’s pit is probably not an olfactory organ since it has no specialised sensory cells, nor it has any connection with the brain.

Sensory cells are found scattered all over in the epidermis, they are specially abundant on the dorsal side of the body and on oral cirri. Each sensory cells has a nerve fibre at its lower end and at the outer end it has a hair-like sensory process projecting from the cuticle. These cells respond to contact and some of them are concerned with determining the nature of the sand in which the animal will burrow, for the animal avoids sand which is too fine.

The above mentioned receptors in or near the integument are collectively known as exteroceptors or external receptors.

Besides the above external receptors, there are sensory nerve endings in myotomes which respond to internal stimuli, such as muscular contractions. These internal receptors in muscles are called proprioceptors.