In the adult there is a brain or nerve ganglion which is about 4 cm long. It lies embedded in the mantle mid-dorsally between the two siphons. The brain lies below a neural gland in family Pyuridae to which Herdmania belongs, but in most ascidians the position of the brain is dorsal to the neural gland.

The brain has bipolar and multipolar nerve cells and gives off three nerves towards the branchial siphon and two towards the atrial siphon. The brain represents the degenerate remains of the anterior part of a well-developed nervous system found in the larva. 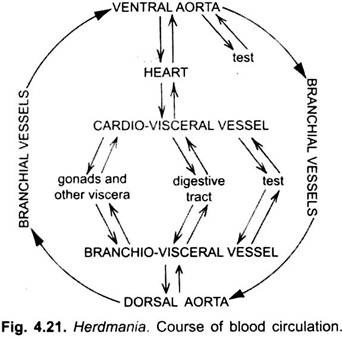 The nerve ganglion or brain, the neural gland and the dorsal tubercle together form the neural complex.

There are no special sense organs. Many cells receive a nerve, especially in the test and the siphons.

1. Red pigmented cells situated on the margins of siphons and vascular ampullae are photoreceptors being sensitive to light.

2. Sensory cells of the test, margins of siphons and tentacles are tangoreceptors being sensory to contact.

3. The cells on the margins of siphons are rheoreceptors. They are sensitive to water currents.

4. Cells lining the siphons are thermoreceptors. They are sensitive to changes of temperature.

5. The tentacles and dorsal tubercle are the chaemoreceptors.

Lying in the pre-branchial zone, near the junction of dorsal lamina with the peripharyngeal bands is a dorsal tubercle. It has a broad base with two spirally coiled lobes. Each lobe has three coils and its surface has ciliated cells. Each lobe has a open coiled, ciliated narrow channel running from its base to the tip of the lobe.

The channels of both the lobes unite at the dome-like base of the dorsal tubercle. The dorsal tubercle is richly supplied with the blood in blood sinuses present in the loose connective tissue and nerves. It is an olfactory and gustatory organ. 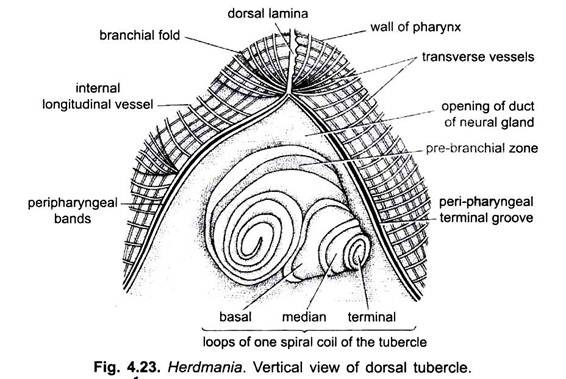