The circulatory system of Herdmania includes heart and pericardium, blood vessels and blood.

The blood is slightly reddish vacuole and transparent. It has colourless plasma, many pigmented and non-pigmented corpuscles, and a few colourless amoeboid leucocytes. Leucocytes are nucleated, amoeboid and colourless. Other corpuscles are round, of various sizes, some have vacuoles, and they may or may not be nucleated.

They may have no pigment, while others may contain orange, brown or yellowish-green pigment. The green pigment is vanadium which is claimed to be respiratory pigment, but its oxygen absorbing power is so low that it cannot be respiratory. Ascidians have no capillaries, but there are many sinuses. There is no distinction between blood and tissue fluid, since they intermingle freely. 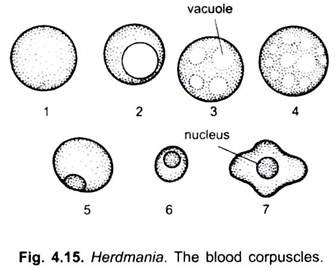 Lying below the right gonad is a tubular, elongated pericardium with thick non-contractile wall. It is about 7 cm long and 3 mm wide. It is closed at both the ends and contains a colourless pericardial fluid having corpuscles similar to those of blood. Its wall is composed of connective tissue having blood sinuses. It is internally lined by squamous epithelium. Inside the pericardium is a thin-walled, tubular, contractile heart with striated muscles.

The heart is attached along its whole length to the pericardium by a thin connective tissue flap. The heart is opened at both the ends. A pear- shaped body is present in between the heart and pericardium which probably regulates the blood flow in the heart. 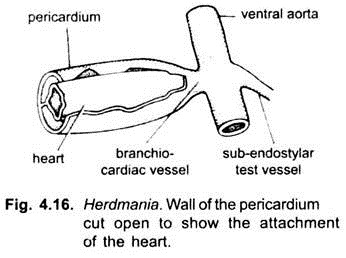 There are no true blood vessels in most ascidians, but they are well developed in Herdmania. Ventrally the heart opens into a ventral aorta which lies in the pharyngeal wall along the whole length below the endostyle. The ventral aorta near the heart gives out a ventral test vessel supplying blood to the test.

Throughout its length the ventral aorta gives out paired transverse vessels which run in the pharynx wall on each side between rows of stigmata. From the transverse vessels arise smaller branches which pass between the stigmata of each row. 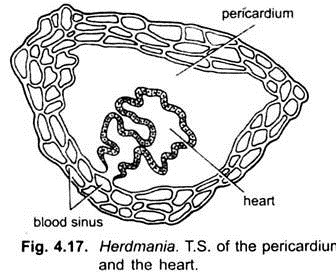 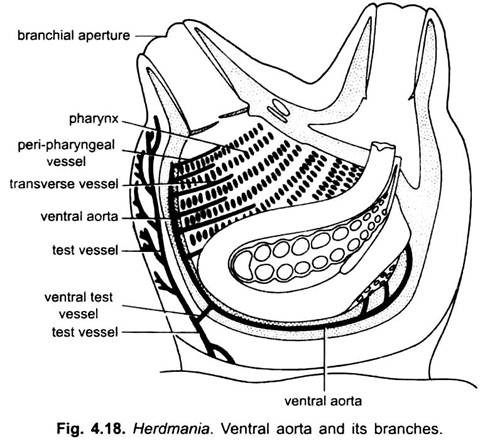 From the dorsal end of the heart arises a cardio-visceral vessel which near its origin gives a right hepatic vessel to right liver lobe and an oesophageo- test vessel to the oesophagus and test. The main dorsal branch gives a test vessel, a left oesophageal vessel and right gonadial vessel to corresponding organs.

(i) The main dorsal vessel further extends and gives off circular subtentacular vessel at the base of atrial tentacles and siphonal vessels to atrial siphon.

(iii) Ventral vessel soon divides into a dorso-intestinal, a gastric and a dorsal test vessels takes blood through its branches to the test, liver, gonads, oesophagus, stomach and intestine.

Peristaltic contractions of the heart and small pear-shaped body within pericardium pass in waves from one end of the heart to the other for several beats, then there is a short pause after which contractions begin again and pass in waves in the opposite direction, thus, the flow of blood is alternately in opposite directions. Nowhere else in the animal kingdom this peculiar reversal in the flow of blood is seen.

When the heart beats dorso-ventrally the blood is driven into the ventral aorta from where it goes to the test and to the pharynx through the transverse vessels. The blood is oxygenated in the pharynx from where it goes to the dorsal aorta which enters the branchio-visceral vessel. From here the blood goes to the liver, gonads, oesophagus, stomach and intestine. The blood from these organs and the test is collected by the cardio-visceral vessel and returned to the heart. 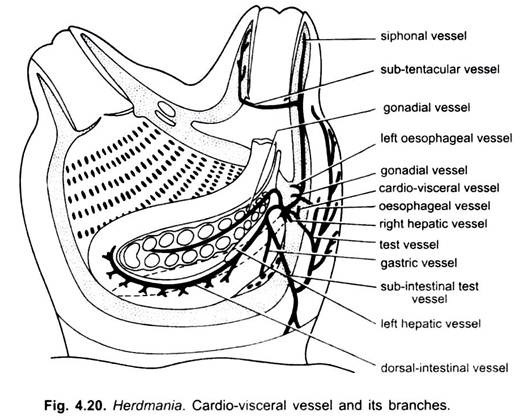