The body of Herdmania can be roughly divided into two parts- the body proper which projects into the sea water and the foot which lies imbedded in the sea-bottom. All the soft parts of the animal lie in the body proper. The foot is entirely composed of the test. If the test is removed from the left side of the body proper, many of the internal organs of the animal can be seen through the more or less transparent mantle; or the test can be removed altogether and the body examined. 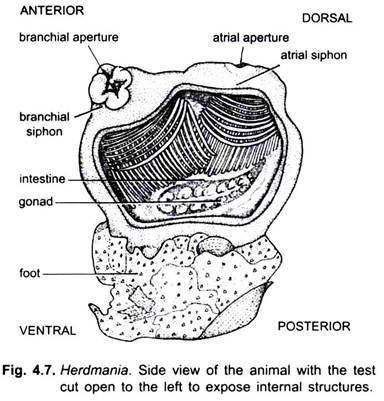 When the body is examined from the left side one can easily identify the following structures:

1. The two projecting siphons with their annular and longitudinal muscles, and the respective apertures each guarded by four lips.

2. The stomach, intestine and rectum, the intestine forming a wide loop.

3. A part of the left lobe of the liver appearing as a chocolate-coloured body in front of stomach.

4. The left gonad forming a lobulated pinkish mass lying in the loop of the intestine.

5. Endostyle along the ventral margin of pharynx. 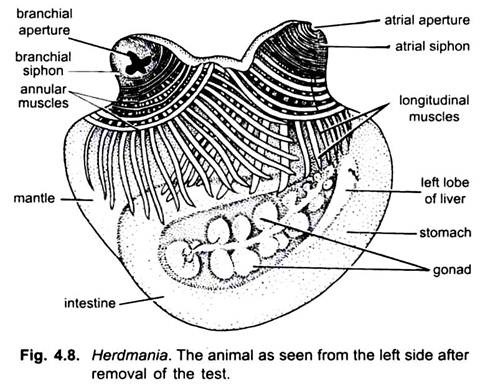 If the body is examined from the right, one can see the following structures:

1. The two siphons along with their musculature and apertures.

3. The pericardium appearing as a long transparent tube of uniform thickness, within which lies the heart.

4. The right lobe of the liver forming a more or less oval chocolate-coloured mass near the anterior end of the pericardium.

5. The right gonad forming a lobulated pinkish mass close to the line of insertion of the longitudinal siphonal muscles.

6. The endostyle as an opaque rod running all along the ventral margin of the branchial sac.

In the prebranchial zone, near the junction of the peripharyngeal bands and the dorsal lamina, lies the dorsal tubercle. The dorsal lamina extends right down to the anterior margin of the oesophageal opening surrounded by the so-called oesophageal area. The exposed internal surface of the branchial sac shows a number of folds on both sides. 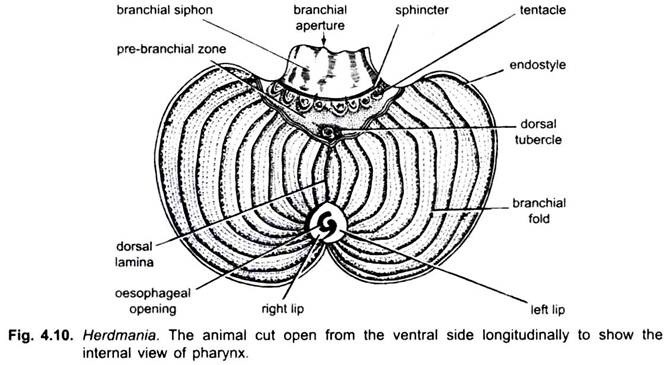