In this article we will discuss about the anatomy of crocodilia with the help of suitable diagrams.

Bony plates of the back are pitted and sculptured and frequently keeled. Ventral plates are less sculptured and not keeled. On the tail these plates form a dentated dorsal crest, paired in front, but single behind. The nostrils are placed at the end of long snout and can be opened and closed by longitudinal dilator muscle and constrictor muscle encircling the dilator muscle respectively.

Tympanic membranes are exposed, but can be covered over by a cutaneous fold. The eyes have both the eyelids and a nictitating membrane. There is a bony plate in the upper eyelid. Pupil is vertical. There is a small pecten-like Uromastix. They have two pairs of limbs, of which the forelimbs are shorter and have five digits and the hindlimbs have four digits. The three preaxial digits in each limb possess nails. The hindlimbs are more or less webbed. Tail is laterally compressed and elongated.

In skull there is a low cartilaginous interorbital septum with a membranous interspace. The presphenoid and orbitosphenoid region remains cartilaginous. Alisphenoid and a separate prootic is present. The epiotic fuses with the supraoccipital and opisthotic with the exoccipital. Occipital condyle is formed by the basioccipital only. Parietals and frontals are unpaired in the adult.

Premaxillaries surround the nostrils. Nasals are long and usually reach the premaxillaries, but in Gavialis nasals are separated from the premaxillaries by the maxillaries. Paired vomers and their opposed vertical plates separate the narial passages. Premaxillae, maxillae and palatines develop palatal plates which unite in the middle line and form a hard palate.

Pterygoids are modified due to which internal narial opening is placed far back on the base of the skull. An ectopterygoid or transpalatine connects the pterygoid with the maxilla and jugal. Prefrontals, unperforated lacrymals and postfrontls are present. The orbit is separated from the temporal fossa by the postorbital bar formed by processes of the postfrontal and jugal.

Cervical vertebrae possess ribs. These ribs are two-headed. Dorsal vertebrae also possess two-headed ribs. Lumbar vertebrae are without ribs. Sacral vertebrae have ribs attached to the centrum and neural arch. Chevron bones are present in the caudal vertebrae except on the first and posterior vertebrae.

Sternum consists anteriorly of a rhomboidal plate of cartilage to the sides of which are articulated two thoracic ribs. Sternal plate posteriorly bifurcated to which are attached 5-7 ribs. Interclavicle is slender placed on the ventral surface of sternal plate. Thoracic ribs possess uncinate processes in the form of small cartilaginous plate. Abdominal ribs are membrane bones placed on the ventral surface of rectus abdominis muscles.

Each rib has two curved rods not united in the middle. Ribs are bicephalous. Columella is bony, extends from fenestra ovalis to articulate with a trifid cartilage (extra-columellar cartilage) which is attached to the tympanum. Tympanum is protected by scaly movable flaps. Eustachean tubes are very complicated and lagena is large.

Hyoid has a cartilaginous body, a pair of partly ossified cornua.

Pectoral girdle (one half) has a scapula with a dorsal cartilaginous suprascapula, marginal and un-fenestrated coracoid. Clavicle is absent. Hand has five clawed digits. In the pelvis are present the ilia attached to two sacral ribs, large both ischia united in a ventral symphysis and pubes which do not take part in the formation of acetabulum. Ventral end of pubis extends forward as an epipubis (cartilaginous). Both the epipubes are united behind by a broad ligament. Pes has four clawed digits. Number 5 being absent.

The teeth are thecodont, hollow, conical and without roots, attached over the premaxillae, maxillae and dentaries. They are shed at intervals and replaced by new teeth formed behind them. IV mandibular tooth is the largest. Tongue is flat and non-protrusible. Salivary glands are absent.

There is a transverse fold of mucous membrane of the palate just in front of choanae, which with the help of flap behind tongue can shut off the mouth from pharynx. Oesophagus can be distended to store food. Stomach is a gizzard-like sac with muscular walls and tendinous discs. It contains stones (gastroliths). Pyloric region is glandular. Gall bladder is present but caecum is absent. Cloaca is divided into two parts by a muscular fold.

Anterior chamber receives the paired openings of urinary and generative ducts. Posterior chamber, on the ventral side, has a grooved penis developed from the ventral wall of cloaca which ends in a glans penis. It consists of a fibrous body and some erectile tissue around the groove and in the glans. Urinary bladder is absent.

Trachea is long and provided with complete rings. Larynx is provided with vocal chords. Epiglottis is absent. Lungs are spongy and well developed. Tracheal division bronchi enter into lungs of its side from the middle and continue to its hind end. It looses its tracheal rings and beset with openings which lead into pouches whose walls are like honeycomb. Lungs lie in the anterior part of the body cavity. It is partitioned off from the rest by a partly muscular and partly membranous septum. It assists in the inspiratory movements.

Opening of each of these three great arteries are guarded by two semilunar valves. Foramen of Panizzae is also present at the crossing point of two aortic arches. Thus, the arterial and venous blood are not completely separated.

Cerebellum is more developed than in other reptiles and possesses a median vermis and two small lateral lobes.

Kidneys are lobed. Testes are oval and ovaries are elongated. In male a median erectile penis is present. In female clitoris occurs. Male crocodiles defend territories by fighting and roaring. Courtship is complex and fertilisation is internal.

The eggs are hard-shelled and are laid in the sand or in holes on the banks. Nile crocodile buries her eggs in a nest, then stays near them throughout incubation, helps the young to hatch, and escorts them to the water. Crocodiles first appeared in the late Triassic. There were numerous types of crocodile in the Jurassic and Cretaceous, living both in freshwater and in the sea.

The present living forms dates from the Cretaceous period. Today many species of crocodiles are seriously threatened by the demands of the skin trade. So conservation measures, in association with farming, are being taken by different countries. 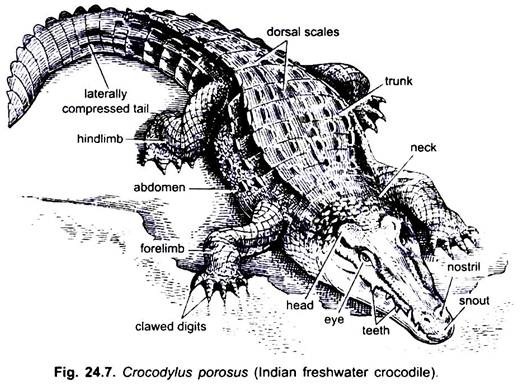 The snout is stout rather broad. Limbs are pentadactyle with five fingers and four toes. The fingers are webbed at the base and the outer toes are broadly webbed. The tail is long and laterally compressed. Mandibular symphysis is short, extending only to the level of fourth or fifth tooth. There are upper and lower jaws, each contains 19 teeth on either side. The fourth mandibular tooth fits into a notch in the upper jaw. The fifth upper tooth is the largest.

Vertebrae are procoelous. The nuchal scutes are six in number which are packed closely together forming a square, The dorsal shield is composed of four, sometimes six, rows of larger scutes of which the central pair is the broadest. The ears are covered by movable flaps of skin Oviparous. Predators. Crocodylus porosus has a wide distribution. It inhabits the rivers, ponds, tanks and marshes of India, Sri Lanka, Myanmar, Malacca, Malay Islands and Baluchistan. 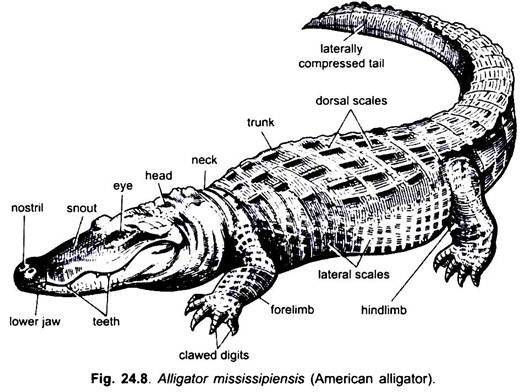 The dorsal shield is formed by 6 or 8 longitudinal series of keeled bony scutes. The neck is protected by two pairs of large scutes. Predators. Alligator mississipiensis is found in the rivers of Southern States of North America and A. sinensis occurs in the rivers of China.

The mandibular symphysis is so long that it comprises a great portion of the splenial bones and extends backwards almost to the level of the last teeth. Nasal bones are very short and are separated from the premaxillaries. On either side 28 teeth in the upper jaw and 25 teeth in the lower jaw. First and fourth lower teeth fit into grooves in the upper jaw.

Vertebrae are procoelous. In male, the nose is very much swollen and can be inflated like a bag when the nostrils are closed. Gavialis is a harmless creature and feeds entirely on fish. Gavialis gangeticus is found in India inhabiting chiefly the basin of Ganges, Brahmaputra, Indus, Mahanadi and Arakan. 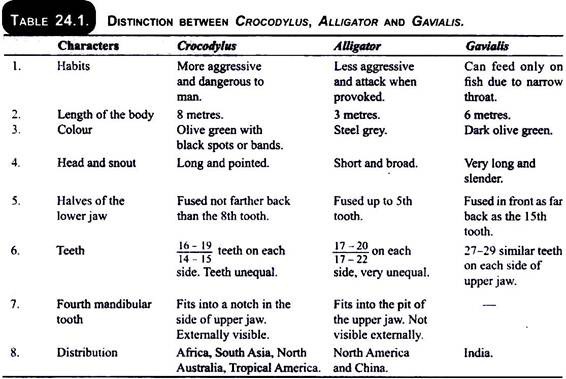 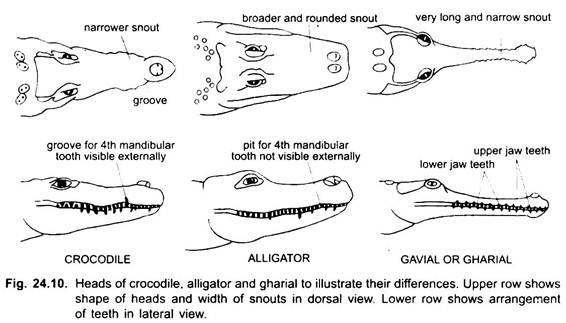