In this article we will discuss about the anatomy of sphenodon with the help of a suitable diagram.

Sphenodon punctatum (Hatteria) is (Fig. 24.3) commonly known as Tuatara by the native Maories. It is the only living member of order Rhychoceplia which were common about 200 million years ago. It was once widespread throughout New Zealand but became much reduced due to the advent of terrestrial mammals including man. Today Sphenodon is restricted to coastal islands where it burrows into the soft soil, emerging particularly at night. It is rigidly protected by law. It has remained unchanged for 200 million years persisting as a primitive “living fossil” showing the condition of diapsids of late Permian. 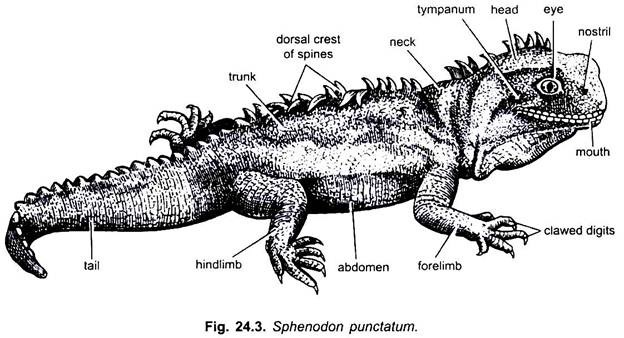 Sphenodon inhabits burrows made in the soft soil and in rocks, often in association with petrels, and is nocturnal in habit. They are carnivorous, feeding on invertebrates and fish. They are slow in their movements. However, they can run fast and can defend themselves with some vigour. They lay eggs from November to February. The eggs take over a year (13 months) to hatch. The survival of Sphenodon in captivity is twenty-eight years.

Sphenodon is a lizard-like reptile measuring about 60 cm in length. It possesses a scaly skin, a long laterally compressed tail and four-clawed pentadactyle limbs adapted for walking. Its upper surface has granular scales, there is a median row of scales forming spines from the head to the end of the tail, except on the neck, lower surface has transverse rows of large squarish plates.

Vertebrae are amphicoelous, with remnants of the notochord in the intercentral spaces. Intercentra may be represented by bony elements formed by ossification of ventral portions of the intervertebral discs. Chevron bones also occur in the caudal vertebrae.

There is a median bone, proatlas, intercalated between the atlas and the occipital region of the skull. Ribs (single- headed) are present with all the vertebrae of the pre-sacral region. In Sphenodon, caudal ribs are also present which become fused with the vertebrae. Uncinate process is also present in the ribs.

Skull is lizard-like, but there is a complete lower temporal arch. The quadrate is fixed, wedged in by the quadrato-jugal, squamosal and pterygoid. Premaxillae are not fused together, but separated by a suture. There is a broad palate formed by the plate-like vomers, palatines and pterygoids. Humerus of Sphenodon has a foramen above the outer and one above the inner condyle.

Carpals are eleven – 4 including pisciform in the proximal row, 2 centrales and 5 in the distal row. Pubes of pelvic girdle are united in a symphysis, in front of which is a cartilaginous epipubis. A large oval foramen is present between the ischium and pubis. A cartilaginous hypoischium is attached to the ischia behind. In the tarsus, tibial and fibular elements are distinct but firmly united. Intermedium and centrale are firmly fixed to the tibiale. There are 3 distal tarsal bones.

Sphenodon possesses pointed, triangular, laterally-compressed teeth in two parallel rows, one along the maxilla, the other along the palatine. Lower jaw also possesses similar teeth, bite in between these two upper rows. All the rows becoming worn down in the adult to form continuous ridges. In young Sphenodon a tooth has been found on each vomer, a condition unusual among reptiles.

Respiratory system includes an elongated trachea whose anterior part is dilated to form the larynx. Its wall is supported by cricoid and arytenoid cartilages. Sphenodon emit a soft frog- like croak. Lungs are lizard-like.

In Sphenodon, sinus venosus is not easily distinguished externally as visible in other reptiles. Other structure is similar to that of other lizards. Jacobson’s organs in Sphenodon are in a rather primitive form.

In Sphenodon is found the median pineal eye developed in close relation to the epiphysis. It is situated in the parietal foramen of the cranial roof just beneath the integument, and covered in the young by a transparent scale. It has a lens and retina supplied by a nerve from the brain. In other reptiles nerve usually degenerates before the animal reaches maturity.

In Sphenodon, the tymparic membrane is not visible externally but it is visible after removing the skin in the aural region. Tympanic cavity is represented by a large pharyngeal recess.

Sphenodon (Rhynchocephalia) make their appearance in the Permian and, therefore, they are the oldest known reptiles. For this reason and also due to resemblances to the lizards, Crocodilia, Dinosauria and Chelonia they have been regarded as an ancestral group or closely allied to the ancestors of reptiles. No fossil specimen of Sphenodon has been found.

It is now referred as “living fossil” because it has many primitive characteristics of stem reptiles of the Permian period and has undergone a relatively less change than most others. It may be significant that it is found in an isolated island region.

Sphenodon is a highly modified animal which persisted from Permian to recent times. It shows a number of similarities and dissimilarities to the other groups of reptiles, i.e., Squamata and Crocodilia, and so it is placed in a separate order Rhynchocephalia.