In the embryo, the brain is formed by the dilation of the neural tube, at the anterior end. Constrictions appear in the brain rudi­ment and three vesicles, the forebrain, or pros-encephalon, midbrain or mesencepha­lon and hindbrain or rhomb encephalon are formed. The forebrain subdivides into an anterior telencephalon and a posterior diencephalon.

The midbrain remains unchanged as mesencephalon. The hindbrain gives rise to an anterior metencephalon (cerebellum) and a posterior myelencephalon or after brain, the medulla oblongata (Fig. 13.3). The rest of the neural tube form the spinal cord in the adult. 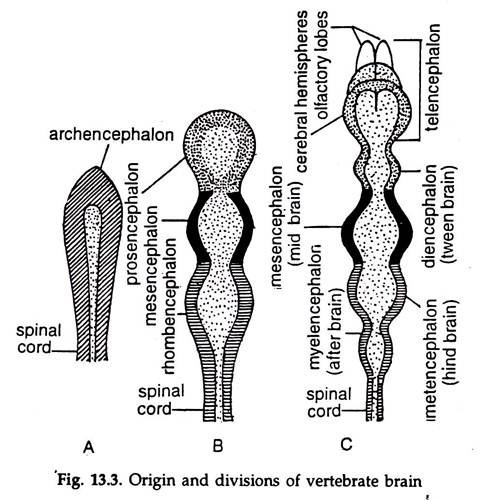 The neurocoel or the cavity in the neural tube divides correspondingly forming ven­tricle in the brain. The chief divisions of the ventricle are the first, third and fourth ven­tricles located in the telencephalon, diencephalon and medulla oblongata, respectively.

Paired lobes, the cerebral hemispheres develop from the pros-encephalon and their cavities are the first and second ventricles, also known as lateral ventricles, communi­cate with the third ventricle in the diencephalon by a narrow foramen of monro.

The canal is lined by a ciliated epithelium. The ventricles and the central canal are filled with a cerebrospi­nal fluid. The solid portion of the central nervous system enclosing ventricles in the brain and central neural canal in the spinal cord is made of grey and white matter.

Aggregation of the cell bodies of the neu­rons gives a grey appearance to the region formed by them and the portion is called grey matter.

The Portion formed by the aggregation of nerve processes is whitish in colour and termed white matter. In brain, the grey matter is restricted to the outer zone, while in the spinal cord it lies inwards, towards the central canal and vice versa.

The brain and the spinal cord are en-sheathed in meninges, consists of three lay­ers. The outermost layer, Dura mater lies against the cranium bone, the innermost layer, the pia mater lies on the surface of the brain and the middle layer, the arachnoid lies in between the two. The spaces between the pia mater and the arachnoid are filled with cerebrospinal fluid.

Starting from distinct five divisions which is found in fishes, the vertebrate brain under­goes a series of modifications resulting in the most complex brain in mammals. The primitive brain becomes complicated due to unequal thickening of the walls.

The floor of the medulla thickens greatly but the roof is made of a single layer of nortnervous epithelium. The great thickness of the cere­bellum obliterates the epicoele. The ventral wall of the mesencephalon thickens to form two longitudinal bands, the crura cerebri; the dorsal wall forming a pair of large optic lobes.

The sides of the diencephalon thickens to give rise paired optic thalami, the roof remaining a single layer thin membrane, but a part of it forms pineal apparatus. The floor of the diencephalon grows downward to form infundibulum to which the pituitary gland is attached.

The pituitary gland is formed partly from a diverticulum of the pharynx and partly from the extremity of the infundibulum. The telencephalon grows for­ward, enlarges greatly and due to fusion of the internal dorsal and ventral edges of the lateral walls, the two cerebral hemispheres (cerebrum) are formed.

With the progress of evolution, the hori­zontal plain of the vertebrate brain under­went drastic changes. Owing to the bending down of the anterior part (cerebral flexure) the brain assumed the shape of a retort, the axis of the forebrain inclined to that of the hind brain. The cerebral hemispheres grew forward, parallel to the hindbrain. The thick­ening of the floor of the mid and hindbrain made them obscured in the adult.

These may be placed in three groups:

Groups of nerve cells and nerve fibres in the mesencephalon connect the cerebrum (cerebral hemispheres) with the posterior part of the brain and the spinal cord.

The cerebellum is concerned with coordi­nation of voluntary muscles, posture, move­ment, balance and equilibrium of the body.

An aggregation of neurons in the core of the brain stem is known as reticular forma­tion. It is surrounded by neural pathways conducting impulses between the brain and the spinal cord.

Myelinated nerve fibres running longitudinally and so connect­ing different levels of the spinal cord are present in the white matter. The spinal cord can carry out certain func­tions, e.g., spinal reflexes, independent of the brain. Extensive connections between sen­sory and motor nerves in the spinal cord enable it to carry such activities.