In this article we will discuss about the:- 1. Introduction to Cockroach 2. Feeding in Cockroach 3. Digestion 4. Digestion Procedure.

Cockroach (P. americana) belongs to the class Insecta of Phylum Arthropoda. It is a common nocturnal omnivorous household animal which acts as a scavenger. It prefers dark warm corners of kitchens, godowns, underground drains and places where food and humid atmosphere are available.

Cannibalism is a common feature among cockroaches. They are very fast moving and escape predators by producing a pungent secretion from the abdominal glands.

Cockroaches have adopted themselves to all types and sizes of diet. To handle the various types of food all the appendages of cockroach act synchro­nously. Out of all appendages only mouth parts are described here as feeding apparatus, followed by the process of feeding.

The mouth parts are composed of paired appendages like mandibles and maxillae and unpaired structures like labi­um, hypo-pharynx and labrum (Figs. 1.119 and 1.120). Details description are given in chapter 1.

After detecting the appropriate food, they gradually move over it. Then the food is procured by the maxillae and is cut into pieces by the mandibles. The procurement and cutting are assisted by anterior/pro- thoracic legs. 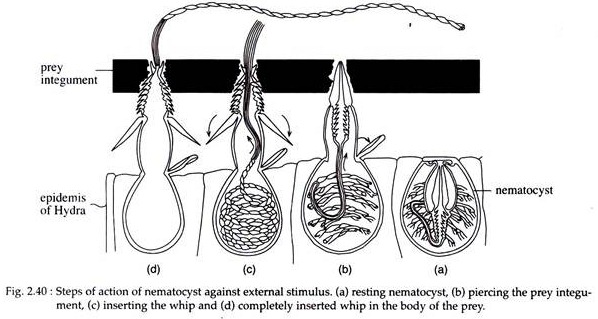 Extracellular digestion is the characteristic like other developed animals. Digestion starts from the buccal cavity containing the mouth parts. The food is then subjected to a variety of biochemical reaction within a specialized digestive system.

The digestive system, which is responsible for digestion and absorption of food materials, includes digestive canal or tract and diges­tive glands.

The tract is about 6.7 cm in length. It is divisible into three distinct regions:

It is also known as stomodaeum. It is lined internally by cuticle and includes the mouth, pharynx, oesophagus, crop and gizzard (Fig. 2.41). The mouth denotes the beginning of the alimentary canal. This aperture leads to a small chamber called the buccal cavity between the mandibles and maxillae on either side. The labrum serves as upper lip and labium acts as lower lip.

A short tongue or hypo-pharynx is present on the floor of the buccal cavity. The buccal cavity opens into a short pharynx which is a small tube. The salivary duct opens within the pharynx near the base of hypo-pharynx. The pharynx leads into the next part of the fore gut, which is called the oesophagus and the opening between the two is thick, muscular and guarded by a sphincter.

The oesophagus extends up to the prothorax and is followed by the crop. The dilated sac-like crop constitutes the largest part of the fore gut. The wall of the crop is composed of epithelial layer, circular and longitudinal muscle layers. The crop extends within the abdominal cavity and acts as a temporary reservoir of food, where ingested food may be retained for two months.

The crop leads into a short thick-walled gizzard, which forms the last part of the fore gut. It is divided into an anterior and a posterior part. The wall of the gizzard is highly muscular and its anterior part contains in its inner wall six chitinous teeth extending towards the cavity of the gizzard.

The posterior part of the gizzard possesses two circular hairy cushions. The teeth are used for crushing the food and the hairy cushions work as sieve to permit only the finer particles of food to go inside the mid gut. 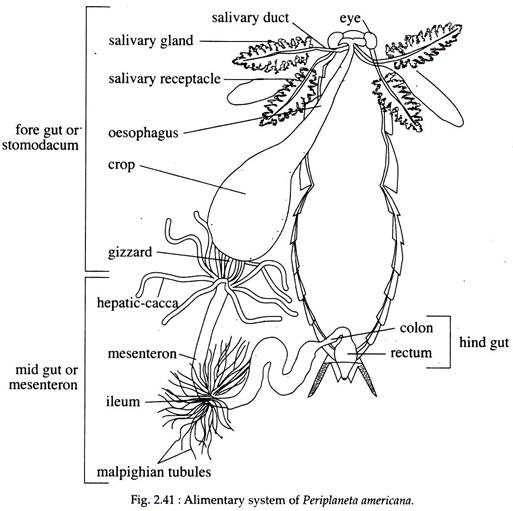 This undivided part of ali­mentary canal is also known as mesenteron. It is a slender tube having an internal lining of columnar epithelium. Near the junc­tion of the fore and mid gut, there are eight hollow slender tubes called hepatic caeca or digestive diverticula.

All the caeca opens within the mid gut and are believed to pro­duce digestive juices. In the inner wall, the epithelial cells throw fine filaments within the lumen of mid gut. The junction of the mid and hind gut is marked externally by the presence of numerous threads called Malpighian tubules which are excretory organs (Fig. 2.41).

It is divisible into follow­ing parts —ileum, colon, rectum and anus (Fig. 2.41). The ileum is the first part of the hind gut and has small narrow lumen having epithelial lining. The ileum leads to colon, which is broad and slightly coiled.

The inner lining of colon is thrown into irregular folds and is formed by slender epithelial cells having a chitinous covering. The colon con­tinues into a small sac-like rectum. The inner wall of the rectum is raised in the form of papillae.

Special kinds of glands called rectal glands are present in the rectal wall for absorbing water. Thus the rectum not only stores the residual parts of the food but also helps in osmoregulation. The rectum opens to the exterior through an opening called the anus. The anus is provided with a sphincter muscle.

The salivary glands, the inner lining of mid gut and hep­atic caeca are the digestive glands of cock­roach. A pair of salivary glands lies one on each side of the thoracic cavity. Each gland consists of two leaf-like diffused lobes and a reservoir. The secretory lobes, reservoirs and their ducts together constitute the salivary apparatus (Fig.2.42).

The lobes of the salivary gland open within the reservoir. From each reservoir a salivary duct runs anteriorly. The salivary ducts of two sides unite to form a common duct which runs along the oesophagus to open into the pharynx and near the base of hypo-pharynx.

Each lobe of the sali­vary gland is made up of secretory acini, which are made up of two types of cells — cells which are packed with secretory granules; cells with an intracellular duct (lined by chitin), with numerous microvilli.

Within the buccal cavity, the food comes in contact with saliva and passes through the oesophagus into the crop. Both peristalsis and antiperistalsis take place in the crop. Such activities of the crop are more intense in males than in females. The passage of food from the crop to the gizzard depends upon the ingested fluid.

From the crop, the food passes to the gizzard, where the cuticular teeth crushes the food and the hairy cushion permits only finer particles to enter the mid gut. The lining of mid gut and hepatic caeca act both as secretory and absorptive areas. Following enzymes are present in the secretion of these regions—amylase, maltase, invertase, lac­tase, β-glucosidase, protease and lipase.

The cellulase obtained in the mid gut is synthesised by the micro-organisms residing there. Most of the digested foods are absorbed only in the mid gut. Glucose is absorbed by the caeca.

After the absorption of digested food, the rest passes within the hind gut, where water and salts are absorbed. Residual matter is temporarily stored in the rectum and are periodically rejected through the anus. Food requires nearly 33 hours to travel the entire length of the alimentary canal.

It may be mentioned here that from the junction of gizzard and mid gut the epithelial cells constantly throw membranous struc­tures called peritrophic membrane of uncer­tain function. These membranous structures are toned up in the anterior region of the hind gut by the internal spines.

Electron microscopic studies have revealed that the peritrophic membranes are made up of several layers and resemble the structures present in saliva. Such similarity in structures indicates that probably peritrophic mem­branes from mid gut mix up with saliva at the time of regurgitation.