Ten pairs of spiracles or stigmata are present on the lateral side of the body. The largest first pair is present on the mesothorax. The second pair is on the metathorax and the rest eight pairs are on the first eight abdominal segments. Each spiracle is oval in shape and bounded by an annular sclerite having a filtering apparatus formed by the bristles to eliminate dust particles from the inflowing air.

In Blatella, the haemocoel con­tains a network of elastic, closed air tubes or tracheae. Three longitudinal tracheal trunks are present on each side of the abdominal cavity.

Each dorsal and ventral tracheal trunk originates from a trachea aris­ing from the first abdominal spiracle. They extend up to the segmental branch arising from the eighth abdominal spiracle. Six tra­cheae originate from each mesothoracic spi­racle which supply to the head, prothorax and mesothorax. From the remaining spira­cles three segmental tracheae are given out on each side (Fig. 2.53).

The longitudinal trunks and the segmental tracheae are swollen at several places and are known as air sacs (Fig. 2.54). Large tracheae are inter­nally supported by spiral ring of chitin, called taenidia or intima (Fig. 2.55), which prevent the tracheal tubes from collapsing. In addition, chitinous fibrils of 10 to 30 nm thickness and an epicuticle of lipoprotein, line the lumen of the tracheae. 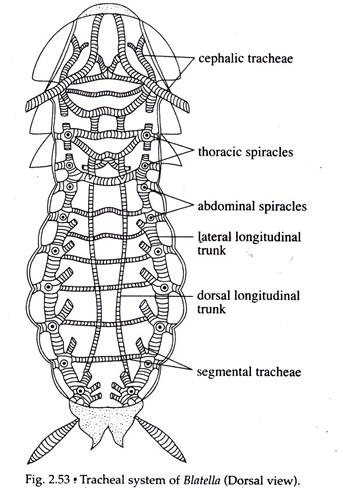 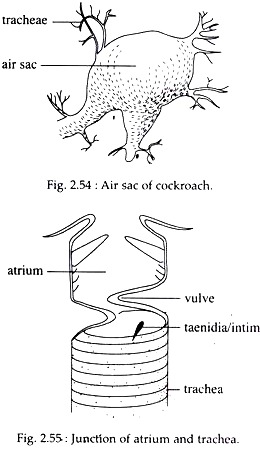 The branched tracheae anas­tomose and penetrate to all parts of the body of cockroach. The ultimate finer branches of tracheae are called tracheoles which come in direct contact with the individual cell (Fig. 2.56). They have a diameter of only 1 micron. Their walls are very thin and devoid of taeni­dia and other chitinous structures.

Instead, they are lined by a protein called trachein. The opening of each tracheole within the tissue is immersed within the body fluid which conveys respiratory gases to the cells. Thus, the elaborate tracheal system carries oxygen directly to all body cells. 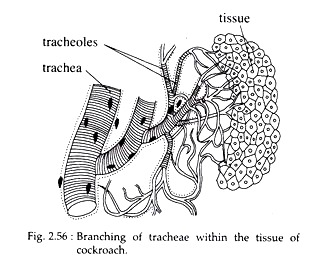 Mechanism of Respiration in Cockroach:

Alternate contraction and relaxation of the abdominal targo-sternal muscles bring about changes in the diameter of the tracheae, so that air is forced in and out of the tracheal tubes through the spiracles. According to one view, during intake of air, the muscles relax to open the anterior four pairs of spiracles, through which air rushes in and reaches up to the intracellular spaces through the tracheoles.

During expiration, the abdominal muscles contract to drive the air out of tracheal space through the last six pairs of spiracles. According to another view, air flows in and out through all spiracles and probably there is no direct circulation of air along the longi­tudinal tracheal trunks.

The oxygen from the air dissolves in the fluid of the tracheoles and diffuses inwards to the tissues, in exchange for the carbon dioxide formed in them. During increased metabolism (at the time of flight), the amount of fluid in the tracheole is reduced by osmo­tic movement of water to the surrounding tissues.

This exposes more of the surface walls of the tracheoles to oxygen, causing increased oxygen supply to the tissues.

The working of spiracles is under the control of central nervous system. Cockroaches can close all the spiracles and may suspend its respiration for a considerable period of time. The opening aid closure of the spiracles depends upon the carbon dioxide concentra­tion. The width of the spiracular opening increases with the rise of temperature from 20° to 32°C.

In cockroaches, blood takes no part in respiration, and the oxygen bearing fluid of the tracheoles serves in internal respiration, like that of lymph in vertebrates. In these insects more than 10% gaseous exchange can occur through body surface.