The below mentioned article provides a study note on the Respiration in Invertebrates.

All animals either aquatic or terrestrial demand a steady supply of oxygen into the cells to get the energy for their metabolic activities and a ready removal of the carbon dioxide released during metabolism. In small animals and at the cellular level, physical forces of diffusion alone affect these exchanges.

Bulky animals with high rate of metabolism and impermeable protective body surfaces need special organs and physio­logical arrangements for the exchange of oxygen and carbon-dioxide between the external environment, and the cells and tissues of the body.

The processes involved in securing and utilizing oxygen are grouped under the general category of respiration which has two distinct aspects.

Firstly, there is an exchange of oxygen and carbon dioxide between the organism and the external envi­ronment known as external respiration.

Secondly, there is the complex reaction that takes place within the cell and that results in the release of energy by the oxidation of the energy rich molecules derived from the food; this is internal respiration.

Linking these two are the transport mechanism that convey the oxygen and carbon dioxide between the external respiratory surfaces and the metabo­lizing tissues. Organs associated with these functions constitute the respiratory system.

Gills are typically the respiratory organ of aquatic animals. It may be external as found in echinoderms, polychaetes, some larval and adult amphibians and fishes, or internal as found in crustaceans, molluscs and teleost fishes. The class crustacea displays a variety of gills which are bathed thoroughly so that the water is brought close to the circulating blood. The gills of the mollusc are housed in the mantle cavity.

Air being a richer resource of oxygen (210 ml/litre as compared with 5-10 ml/litre in water) creates additional hazards for terrestrial life. The evolution of terrestrial animals has depended on the innovation of special air sacs and air tubes. The lung is a vascularized air sac. Lungs thus defined are found in several of the terrestrial invertebrate groups, viz., pulmonate snails, scorpions, some spiders, chilopods, decapods etc.

Basically in all these invertebrate animals, diffusion-lungs are present that lacks good ventilating system. Ventilation lungs are characteristics of terrestrial vertebrates where coordinated muscle movements create a rhythmic exchange of air. The tracheal sys­tem of terrestrial arthropods serves the dual functions of bringing air into the body and distributing it to the cells.

Sometimes the sys­tem of air tube is compared with a lung in which the alveoli have extended throughout the intercellular space as a rami-form network of tubes. Actually the air capillaries or the tracheoles do not enter the cell but only sink into the plasma membrane of cells with high oxygen demand.

In this way tracheoles are functionally intracellular and bring oxygen very close to the mitochondria. This arrange­ment is highly efficient, permitting high rates of metabolism and activity as seen in the fly­ing insects.

In general, respiratory pigments are coloured proteins that contain a metallic element in their constitution and have the property of forming loose combination with oxygen and sometimes with carbon dioxide.

Four different (biochemically) respiratory pigments are recognized – haemoglobin, chlorocruorin, haemocyanin, and haemerythrin. Even in the same phylum there may be several distinct pigments, and more than one distribution of four pigments in the animal pigment may exist in the same animal. The kingdom is shown in Fig. 2.50 and Table 2.1. 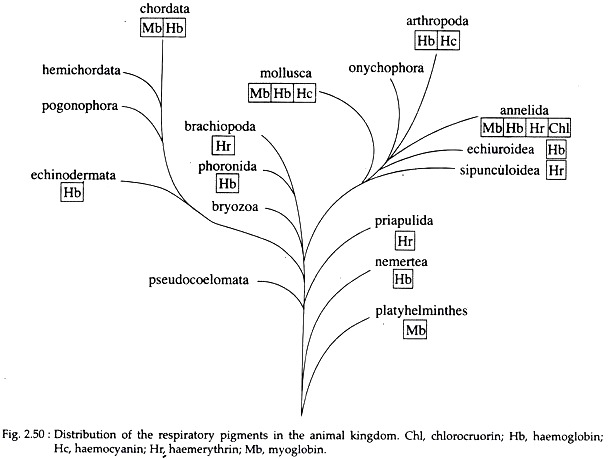 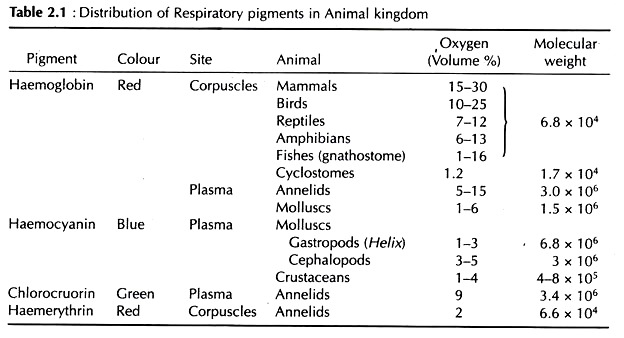 It is the most efficient respiratory pigment. It is widely distributed in the animal kingdom, starting from some protozoa like Paramoecium to almost all verte­brates except eel larvae and some Antarctic fishes. Some invertebrate phyla viz., Porifera, Cnidaria and Ctenophora, totally lack it.

Haemoglobin is made up of an iron por­phyrin compound, haeme, associated with a protein, globin. Haeme is composed of four pyrrole rings linked by methenyl-bridges (—CH=) to form a super-ring with an atom of ferrous iron in the centre attached to the pyrrole nitrogen (Fig. 2.51).

The haeme com­ponent is a constant structural feature of all haemoglobins, but the globin portion varies in different species. In addition, varying numbers of haemoglobin units, unite to form polymers of different sizes.

For example, myoglobin or muscle haemoglobin of all ver­tebrates and oxyhaemoglobin of cyclostomes correspond to one unit, whereas two units are united in some haemoglobins of the polychaete worm Glycera. Several forms of haemoglobin are regularly found within the same animal. In man there are four peptide chains in the globin of vascular haemoglobins.

In the adult human, 90 per cent haemoglobin consists of two a-chains com­bined with two p-chains to form single tetrameric molecule called haemoglobin A. There are 141 amino acids in an α-peptide chain, while each β-chain contains 146. Adult blood also contains a small amount of haemoglobin A2 in which the a-chain are replaced by 6-chains.

Actually these molecu­lar changes confer different transport proper­ties which may be nicely adopted to the changes in respiratory requirements. In the tetramer, a molecule of heme is linked to one of the histidine residues of each chain; the four chains are folded together into an intri­cate molecule which has been mapped in detail by X-ray analysis (Fig. 2.52).

Changes in amino acids of the peptide chain may greatly alter its physiology. The invertebrate haemoglobins differ from the vertebrate ones in having less histidine and lysine, and more arginine and cystine, though these may also differ among themselves.

In all cases, the atoms of ferrous ion remain associated (non-enzymatically) with one molecule of oxygen to form oxyhaemoglobin. The reaction is readily reversible and the non-oxygenated com­pound is referred to as reduced haemo­globin. Haemoglobin is red in colour both in oxygenated and non-oxygenated states.

The association of haemoglobin with oxygen depends not only on the availability of oxy­gen but also on the pH and ionic content of the solution. The partial pressure of oxygen at which haemoglobin is half saturated with oxygen (P50) varies between 10-20 mm of mercury (Hg) in fishes, 20-40 mm Hg in land vertebrates, 40-60 mm Hg in birds and in invertebrates the value is generally below 10 mm Hg.

Among various copper- proteins occurring in nature, only haemo­cyanin can reversibly combine with oxygen and thus, serves as a transport pigment. It is found in Chitons, some gastropods and cephalopods amongst the molluscs and in crustaceans and Limulus amongst the arthro­pods. It always remain dissolved in the plasma.

Generally, molluscan haemocyanins are larg­er than the arthropodan pigment and the for­mer consists of a greater number of subunits as well. Haemocyanin has no porphyrin. In this metalloprotein, the metallic part is cop­per (Cu++), which remains directly linked to the protein part.

The molecules of haemo­cyanin are buildup of units consisting of one copper atom associated with a peptide chain of just over 200 amino acids. During oxy­genation, two atoms of copper are reversibly oxidized to the cupric form.

In de-oxy-haemocyanin, the copper is in the cuprous form. Haemocyanin is colourless in deoxygenated form but bluish in oxygenated state. This pig­ment gets saturated with oxygen at different concentrations in different species.

The value of partial pressure of oxygen ranges between 15-35 mm Hg in Mollusca and 50-20 mm Hg in arthropods. The oxygen transporting capa­city of haemocyanin is less than that of haemoglobin. Besides these two principal respiratory pigments several other pigments occur in some animals.

This green coloured metalloprotein is found in the plasma of certain polychaet families, viz., Sabellidae, Serpulidae etc. It is a metalloprotein with the metal being iron (Fe++); the metalloporphyrin is similar to heme of haemoglobin except that one vinyl (CH = CH2) group is replaced by formyl (0=CH) group in chlorocruorin (Fig. 2.51). The porphyrin is called chlorocruoheme.

This violet coloured pigment is found inside the corpuscles of animals belonging to the phyla Sipunculida, Priapuloidea and Brachiopoda, and also in the polychaete worm Magelona. It is also an iron containing metalloprotein but has no porphyrin.

This brown coloured, manganese containing pigment is present in the plasma of the Lamellibranch and Pinna.