Paramoecium is the fastest moving orga­nism of all protozoans found in fresh water ponds. It possesses cilia or compound ciliary structures as locomotors and food-capturing organelles. This organism is found in abun­dance in stagnant ponds and organic infu­sions.

Orientation of Cilia in Paramoecium:

The body of Paramoecium is covered with a distinct tough and flexible pellicle. The pellicle has inflated donut shaped alveoli which produce a polygonal space. One or two cilia arise through this space. In Paramoecium, the ciliature is divided into body ciliature, which occurs over the general body surface, and the oral ciliature, which is associated with the mouth region. The latter includes larger cilia (Fig. 1.15).

Structure of a Cilium:

The cilia are tiny hair-like appendages about 0-25 µm in dia­meter. Cilia are shorter than the flagella and are generally more numerous than the flagel­la. The ultrastructure of a cilium is identical to that of a flagellum. Thus, each cilium is made up of an axial filament — the axoneme, surrounded by a protoplasmic sheath. The cilium arises from a basal body or kinetosome located in the alveolar layer.

The kinetosomes that form a particular longitudinal row, are connected by means of fine striated fibres, called a kinetodesma. Actually, a single kinetodesma in Paramoecium is a cable of still smaller kinetodesmal fibrils, each of which originates from a kinetosome (Fig. 2.7). The cilia, kinetosome and kinetodesma together make up a kinety. 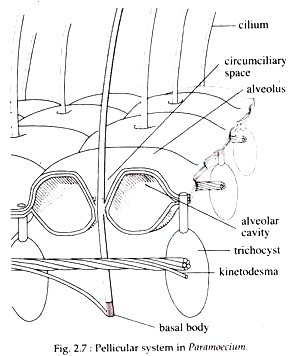 Role of Cilia in Locomotion:

Paramoe­cium exhibits the following types of move­ment by means of cilia which are adapted for acting in fluid media.

During swimming, each cilium moves in a whip-like motion. It first gives a forward active stroke in which the cilium is fully extended and beating against the surrounding liquid. It is followed by a recovery stroke, in which the cilium returns to its original position with an unrolling movement that minimizes the vis­cous drag (Fig. 2.9a).

The direction of the effective stroke is oblique to the long axis of the body of Paramoecium. This causes the ani­mal to swim in a spiral course and at the same time to rotate on its longitudinal axis (Fig. 2.8). 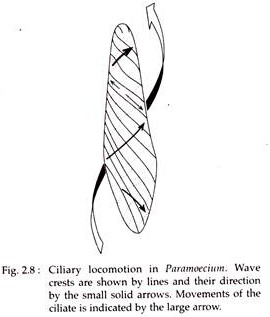 In Paramoecium, cilia do not beat simultaneously rather groups of cilia bend in a coordinated unidirectional waves. The movement of adjacent cilia occurs as a result of interference effect of the surrounding water layer. Thus, the hydrodynamic forces impose a co-ordination on the cilia. This co­ordinated sequential activation of cilia over the surface of the cell body is seen as a wave, called metachronal waves (Fig. 2.9b).

The ciliary beat can be reversed and the animal can move backward. The backward movement is associated with the so-called avoiding reaction. When a Paramoecium comes in contact with some undesirable sub­stances or objects, the ciliary beat is reversed.

The ciliate moves a short distance backward, turns slightly clockwise or counterclockwise, and moves forward again (Fig. 2.10). This avoiding reaction is repeated, till the existence of unfavorable condition. In Paramoecium, energy necessary for ciliary beating is controlled by changing the levels of Ca++ and K+ ions of cellular fluid. 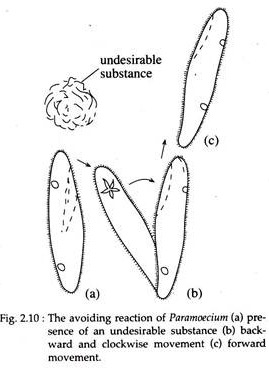 During creeping, Paramoecium uses its cilia of the oral surface as miniature legs and simply glides over the obstacles. As the pellicle is thin and elastic, the ciliate can easily bend and squeeze through gaps narrower than its own body diameter.