Cockroach being an insect possesses an open circulatory system.

The system is poor­ly developed and consists of following organs:

The heart of cockroach is an elongated contractile, narrow tube lying along the mid-dorsal line of thorax and abdomen just beneath the terga. The heart is enclosed in a pericardial sinus, the wall of which has segmented bundles of alary mus­cles and a dorsal fenestrated diaphragm.

The hinder end of each chamber has a pair of minute, lateral and valvular openings called ostia, which allows the flow of blood from the pericardium into the heart only and not in reverse direction. In each seg­ment, heart sends a pair of ex-current arteries.

The heart is closed behind but is continued forward as a short and narrow tube without ostia called the aorta. This aorta and segmen­tal arteries finally open within the haemocoelic spaces.

The body cavity of cock­roach is not a true coelom but a haemocoel containing blood (haemolymph).

The diaphragm or the dorsal fenestrated partition divides the haemocoel into three sinuses:

(i) The dorsal or pericardial sinus surroun­ding the heart, aorta and alary muscles,

(ii) The middle or perivisceral sinus contai­ning the alimentary canal (Fig. 2.66) and

(iii) The ventral sternal or perineural sinus enclosing the ventral nerve cord. It also extends into the legs as septa, dividing the cavity of each leg into two sinuses, one for the outward and the other for the inward flow of blood. The diaphragm being perfo­rated, permits the blood to flow from one sinus into another. 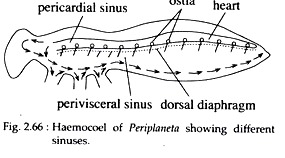 In cockroach, the circu­lating fluid does not always flow through the vessels, rather comes in direct contact with the tissues while flowing in the haemo­coel.

So the ‘blood’ of cockroach is both blood as well as lymph and is therefore, called haemolymph. It is colourless, as it lacks the respiratory pigment haemoglobin and does not take part in respiration. It con­sists of a clear fluid plasma in which are sus­pended nucleated cells or haemocytes.

The plasma serves primarily as a means for:

(i) Trans­portation of dissolved substances like food and wastes round the body,

(ii) Transmission of hydrostatic pressure from one end of the body to the other,

(iii) Reservoir of food as well as water and

(iv) It also helps in hatch­ing of eggs, moulting and in expansion of wings.

The structure and function of the haemocytes of different insects inclu­ding cockroach have been reviewed by different workers. However, the following haemocytes (Fig. 2.67) are most commonly present in cockroach haemolymph. 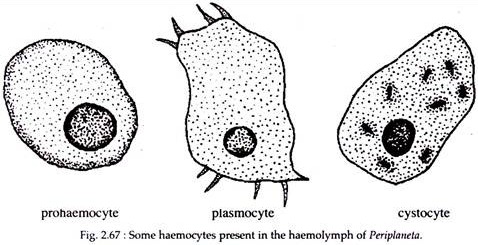 Small round cells with large nucleus and thin agranular cyto­plasm. These cells divide to give rise to other kinds of haemocytes.

Cells with small nucleus and a pale hyaline cyto­plasm with black granules (Fig. 2.67). The total number of cells in the haemolymph of adult Periplaneta is about 15,00,000 though the number obviously depends on the volume of haemolymph which is about 15.7-17.5 per cent of body weight. Haemo­cytes play significant role in the physiology and survival of cockroaches.

(i) Phagocytosis of pathogens and tissue debris,

(vii) Synthesis and storage of proteins, carbohydrates and

Mechanism of Circulation in Cockroach:

It then passes back from the haemocoel of head into that of the thorax and abdomen and enters the pericardium. In addition to alary muscles, contraction of dorsal diaphragm also helps in rapid circulation of haemo­lymph. The heart beats at a rate of 100-200 per minute at 27°C. A complete cycle of circulation of haemolymph through the body takes 20-30 minutes. 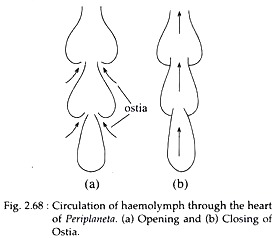