Honey is a food material for the bees and their larvae. Large quantities of honey are stored in the hive to meet the demands in scarcity. Chemically, honey is a viscous water solution of sugar. Its approximate composition in percentage is given in Table 2.2. 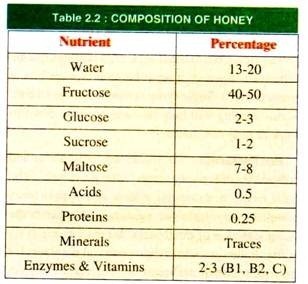 Composition of honey and its different flavours depend on the kinds of flowers from which the nectar is collected. Nectar is sucked from flowers and mixed with saliva. It is swallowed into a special region of the gut, called honey stomach. Nectar is a disaccharide (sucrose) it is hydrolyzed by the salivary amy­lase to produce mono-saccharides (fructose and glucose).

Inside the hive the workers regurgitate the processed nectar. The honey thus produced is still very dilute. After placing this honey onto the storage cells of the hive the bees “fan” with their wings to evaporate the excess water and bring the honey to its required concentration.

Some uses of honey are as follows:

Honey is a nutritious food, rich in ener­gy and vitamins.

It is used as a carrier in ayurvedic and unani-medicines. It acts as a laxative and prevents cold, cough and fever.

It is used in religious ceremonies as a vital component, particularly in several Hindu rituals.

It is used in the making of alcoholic drinks.

Some skin and facial beauty lotions and soaps are made with honey.

In scientific research, some bacterial culture medium is prepared with honey making.

It is utilized for making poison baits for certain insect pests.

There is no ready method to test the purity of honey by the customers. Homogenous granulation is a probable sign of its purity. Otherwise there are laboratory methods for testing (test for monosac­charides). In case of pure honey no sedimentation will appear if kept for several months.

Beeswax is secreted by the wax glands located on the underside of the last four abdominal segments (4th to 7th) of the worker bee. This wax is used in constructing bee combs in which the colony of the bees develops.

Some uses are as follows:

i. Making of candles (the modern candles are made of paraffin wax. a petroleum product).

iii. Preparation of varnishes and paints.

vi. It is used in pathological laboratories and scientific laboratories for preparation of tissues during micro-anatomical survey of soft tissues.

Honeybee collects enough nectar along with plant sap. They ingest the sap and nectar and processed these in the gut. Plant sap is mostly water and sugar with just a fraction of protein. After processing in the digestive system, the remains come out as black drops, which is called honeydew.

Technically, the ingested substance cannot be called honeydew unless it has been run through bee’s digestive tract. The honey­dew that is expelled, lands on leaves, branches, need­les, or even on the ground under the plant. Honeydew is also found from aphids, bugs and other insects. This processed sap is coveted by other creatures, including ants and bees.

Although honeybees prefer floral nectar, during times of dearth-especially in the late summer — they will often collect the honeydew, transport it in their honey crop, and process it just like nectar. The liquid in honeydew evaporates quickly, so honeybees are more likely to collect it in the mornings or evenings.

The bees treat the substance like nectar, so it is often mixed together with the nectar from flowers. As such, it is not really notice­able in the finished honey.

Plant pollen collected by the field bees. As the bee is gathering nectar from flowers, the pollen from the stamen of the flower sticks on the hairs of the bee’s body. Pollen is actually little dust-size particles that is the male gamete of the flower. When the bee arrives back at the hive, the house bees assist in “unloading” the pollen from the body hairs of the field bee.

These gametes are collected in the pollen sacs on the legs of the bee. The house bees mix bee saliva, the plant pollen, and nectar. The bees secrete enzymes into the pollen. This mixture is known as bee bread. The composition of bee bread is given in Table 2.3.

Bee bread is bee pollen, and is different than plant pollen. Plant pollen has been known to increase reactions to allergies and hay fever, but some believe that bee pollen reduces those symptoms.

The picture above (in table 2.3) shows plant pollen collected by the bees and stored on sacs on their legs.

Bee pollen from local sources are especially helpful in reducing allergies and hay fever. There is one main thing to watch out for. If a person is allergic to bee stings, bee pollen may be anaphylactic (cause severe allergic reactions).

Honeybees repair their damaged comb by a waxy substance, called propolis. It has some medicinal importance for human – medicines for tonsillitis, bronchitis and dental infections are made by this substance.

Royal jelly (Fig. 2.13) is a milky substance and is produced specially for prospective queen larva. It is used as medicine for the treatment of human influenza, high blood pressure and respira­tory infections. It is used as a component in some skin care and natural beauty products. It is believed to have anti-aging properties and used regularly in popular alternative folklore medicine. 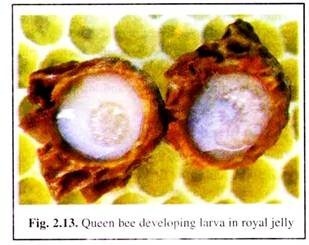 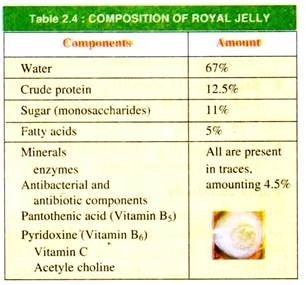 The poison of honeybee is used in the treatment of rheumatism, arthritis, etc. of man.