Crossopterygians or lobe-finned fish are now represented only by fossils. They were very dominant in Devonian times about 280 million years or more ago and became extinct by the end of Cretaceous. However, several living specimens of a specialised side branch, the Coelacanths, have been found in recent years since 1938 near Comoro Islands between Africa and Madagascar.

Dr. J.L.B. Smith of Rhodes University named this “living fossil” Latimeria chalumnae. The generic name was given in honour of Miss Courteny Latimer, curator of East London Museum (South Africa), who recognised it as unusual. The specific name refers to the first site of capture; offshore the mouth of Chalumna river of South Africa.

Latimeria (Fig. 16.2) is steely blue-gray with irregular white spots and highly reflective golden eyes. Size ranges from 0.75 to slightly over 2.0 metres and weighing about 90 kg. The entire body is covered with cosmoid scales. The scales have hollow tubercles, overlap each other to form a strong, thick protective covering. 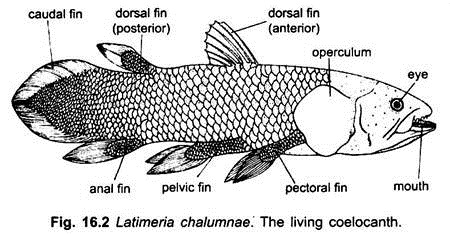 Notochord is unconstricted, vertebral column is cartilaginous, but both neural and haemal spines are ossified. Spines present on the back of fish have coelom, thus, the name Coelocanth is given. Below the lower jaw a pair of bony plates called gular plates is found.

Gill-arches are 5. Internal nostrils are absent. Alimentary canal consists of muscular oesophagus, followed by well developed stomach having gastric glands. Intestine is a long tube having spiral valve. It opens into rectum, opening into cloaca. Rectal gland is present. Liver is bilobed, with large gall-bladder.

Pancreas is present. Air-bladder is covered with fat and is a hydrostatic organ. The heart is primitive. It is S-shaped with the atrium and sinus venosus behind the ventricle, the conus arteriosus has four rows of valves. Near its well-developed olfactory capsules are present a pair of sac-like rostral organs opening to the surface through a series of six pores.

They are perhaps electro-receptors. They have a well ossified internal skeleton and small conical teeth suited for seizing prey. Kidneys are fused and are attached to the ventral wall of abdominal cavity which is peculiar. Each kidney has a ureter which enlarges to form a bladder. In this way two urinary bladders are present. A pair of testes lies posterior to anus. Urinogenital opening is situated between pelvic fins. Copulatory organs are absent. Fertilisation is internal. In the absence of claspers how male Latimeria achieve copulation is not known.

Evidences show that the crossopterygians were not only ancestral to all bony fish, but they also gave rise to the earliest amphibians and other vertebrates that were to master the land.