In this article we will discuss about the respiratory system of the balanoglossus with the help of suitable diagrams.

Two lateral longitudinal para-branchial ridges divide the pharyngeal cavity into a dorsal respiratory or branchial portion and a ventral digestive portion. Dorso-laterally, on each side, the branchial portion of pharynx is perforated by a longitudinal series of numerous U-shaped openings, the gill-slits. The number of gill-slits varies and increases as the animal grows older.

Each gill-slit is a broad oval slit in the beginning, but later, a hollow projection of dorsal pharyngeal wall, called tongue bar, grows into the slit making it U-shaped. The hollow tongue bars enclose coelomic cavity and do not touch the ventral side of the gill-slits. The portions of the pharyngeal wall between two adjacent U-shaped gill-slits are called gill-septa. The gill-septa are solid and do not enclose coelom.

A tongue bar is connected with its adjacent gill-septa by longitudinal connections are called synapticula. The tongue-bars and gill-septa are supported by M-shaped skeletal rods. The middle arm of an M-shaped rod is bifurcated at the free end and lies in a gill-septum while its outer arms lie in adjacent tongue bars. Thus, each tongue bar contains two arms of two adjacent skeletal rods. Each U-shaped gill-slit is richly lined by cilia called lateral cilia.

Gill-slits do not open directly to outside. Each gill-slit opens into a gill-pouch called branchial sac which lies between the body wall and the pharynx. Each branchial sac in turn opens to the exterior by a small, independent gill-pore. However, in Balanoglossus misakiensis the first four branchial sacs become united to open by a common gill-pore to outside.

The collar coelom also communicates with the common branchial sac of its side through a collar canal. The gill-pores are visible externally in two longitudinal rows, one on each side of the mid-dorsal ridge in the branchiogenital region of the trunk.

The lateral cilia lining the gill-slits create a current of water (food- cum-respiratory current) that enters the pharynx through mouth, then passes through gill-slits into the branchial sacs and finally leaves through the gill-pores. The tongue bars are richly supplied with blood capillaries and take part in respira­tion. The blood of their capillary networks takes up oxygen dissolved in water and diffuses carbon dioxide to it. 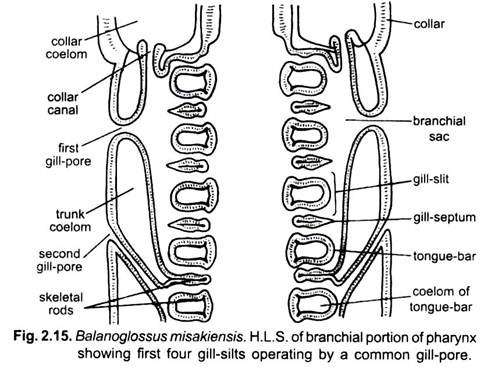