In this article we will discuss about the general characters and classification of Actinopterygii.

1. Body of Actinopterygii is covered by ganoid, cycloid or cten­oid scales. In some cases scales are absent.

2. Generally spiracle is absent in Actinopterygii.

3. External nare is on the top of the head.

7. These fishes are present in marine or freshwater habitat.

Most of our common fishes are included in this group, i.e., Labeo, Clarius, Lates, Hilsa etc. 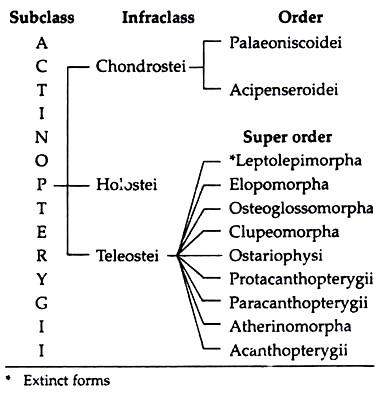 1. Scales are either absent or if present modified in different forms.

5. Endoskeleton is composed of cartilage. In between vertebrae there are noto­chord.

2. Epidermis, over the scales, consists a denticle layer at the outer side.

3. Air sac is like lungs, generally ventro­medial in position and opens through glottis into the golbil.

4. Only a few species are present in the African rivers — others are extinct. 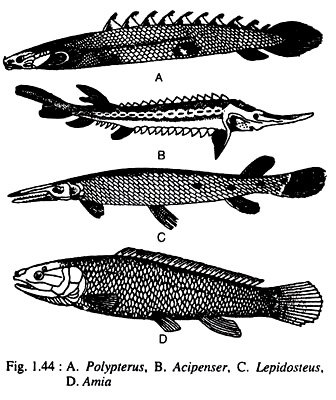 1. Anterior portion of the body is covered by five rows of bony and spiny plates.

3. A long rostrum is present at the anterior side.

4. Jaws are toothless and ill-developed.

7. These are marine in habit, but during breeding season come to freshwater.

8. These are commonly known as Sturgeon.

1. Dorsal fin and pelvic fins are present very near to the caudal fin.

2. Caudal fin is heterocercal type, but seems to be homocercal.

4. These are freshwater in habit.

1. Among fishes these are highly developed and possess various characters in diffe­rent groups.

2. Body is covered by dermal scales. Generally ganoid, cycloid and ctenoid scales are found in these fishes. In some groups scales are absent.

4. Caudal fin is homocercal type. Pelvic fins are situated towards anterior end of the body.

6. Endoskeleton is completely bony in nature.

7. Swim bladder is present in most of the fishes.

8. Intestine do not have any spiral valve.

All the species of this superorder are extinct. They were living during triassic to cretaceous period.

2. Body is covered by small cycloid scales. Head region is devoid of any scales. Some fishes are scaleless.

3. Long dorsal and caudal fins are spine­less. Fins may not be supported by fin rays. Generally pelvic fins are absent.

5. No accessory respiratory organs are present.

1. There are two dorsal fins supported by fin rays.

2. Air bladder or swim-bladder is not con­nected with the intestine through canals or tubules.

1. Body is covered by cycloid scales.

2. Single dorsal fin is present. Pelvic fins are situated towards the posterior part of the body.

3. Fin rays are soft or may be absent.

4. Maxilla is comparatively larger in the size.

5. These fishes are found in sea, estuary and freshwater bodies. 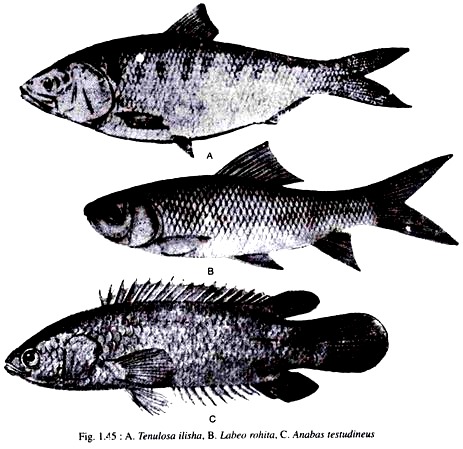 (Some authors described this Superorder as Order — Cypriniformes)

1. Body may or may not be covered with scales.

3. Swim-bladder is connected with the intestine through a tube.

5. These are found in freshwater or slightly saline waters.

6. Most of our commonly known fishes belong to this superorder.

1. Body is covered by cycloid scales.

2. First dorsal fin is modified to form an oval sucking adhesive disc. This disc is called sucker and situated over the head.

5. Maxilla is comparatively smaller in size.

6. Duct of the swim bladder is closed. 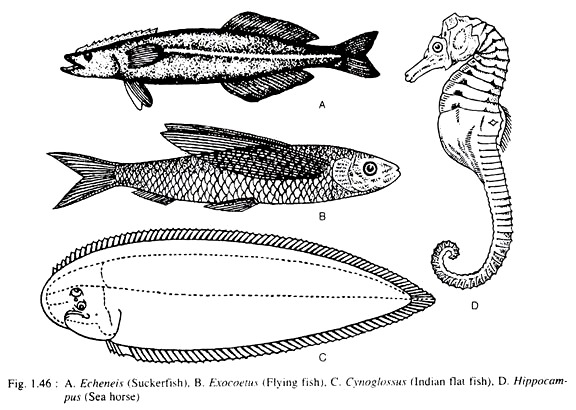 2. Pectoral fins are situated towards the dorsal side. These fins are modified to fan-like structures.

3. Ventral fin is abdominal in position.

4. First dorsal fin is generally absent, when present it is spiny.

5. Mouth aperture is situated at the anterior end of the body.

1. At the anterior end a long rostrum is pre­sent.

2. Mouth aperture is situated below the rostrum.

3. First dorsal fin is generally absent, if present it is spiny.

4. Ventral fin, when present, is abdominal in position.

5. A brood pouch is present in males at the posterior part of the abdomen.

1. Paired fins are scaly with a lobed appea­rance.

2. The skeleton of pectoral fins contains a basal element attached to the girdle and a branching arrangement at the tip.

3. The body is covered by thick, pitted rhomboidal scales. These scales have a characteristic cosmoid layer.

4. These fishes possess internal nares, which opens into the buccal cavity through a pore called choanae.

8. Vertebral column extends up to the end of the tail, and divides the tail into upper and lowers equal halves. 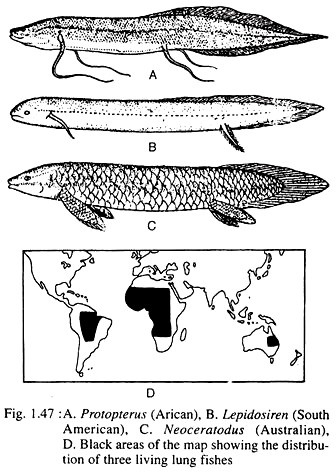 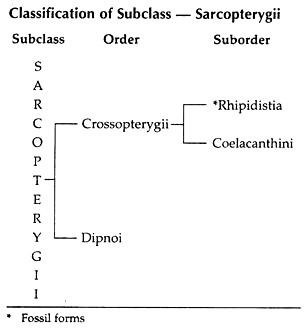 1. Pectoral fin bears a jointed median axis; radials are arranged in both sides of the axis.

4. The tip of the dentary and premaxilla bears some rod like structures.

This group of fishes is completely fossil forms. These were freshwater carnivorous fishes. The body was long and the tail hetero- cercal. This group is important because it probably contains the ancestors of the tetrapods.

2. The whole body is covered with heavy cosmoid scales.

3. The notochord is a massive un-constricted rod.

4. There are small teeth on the premaxilla and tip of the dentary and on palate, but not on the margin of the jaws.

5. There is a well-developed spiral intes­tine.

6. The swim-bladder arises by a ventral opening from the oesophagus and pro­ceeds backwards and dorsally for the whole length of the abdominal cavity.

7. There are anterior and posterior nares, but both open on the surface of the head which have nothing to do with respiration (i.e. there is no choana).

1. The swim bladder is modified into lung. These fishes are therefore, known as lung fishes.

2. Body is covered by scales, which are reduced to bony plates.

4. The paired fins are with an axis and two rows of radials, i.e., archipterygial type.

5. The vertebrae are cartilaginous arches, the notochord remaining as an un-constricted rod.

6. In the gut there is no stomach and the intestine is ciliated. There are no hepatic caeca, but a well-developed spiral valve is present.

There are three genera of Dipnoans found living till date (Fig. 1.48). These lung fishes are mainly inhabitants of rivers and large lakes, they all breathe air. Protopterus lives in the large lakes of tropical Africa. Neoceratodus lives only in the Burnett and Mary rivers in Queensland, Australia. Lepidosiren lives in the rivers of tropical South America. All these fishes are considered as living fossils.

All modern fishes except cyclostomes belong to either the Chondrichthyes or the Osteichthyes. These are diverse in morpho­logy and they are worldwide in distribution. They out number all other vertebrates com­bined and are one of the most successful groups of animals. In the earliest fishes, the ostracoderms, bone was a major part of their external design.

In many later groups, there was a tendency for ossification to extend to the internal skeleton, but bone was secondarily reduced or lost in lampreys, chondrichthyans and some bony fishes, such as lung fishes. Osteichthyans are not the only fishes to con­tain bone in their skeleton, but the taxonomic term ‘Osteichthyes’ recognises the perva­sive presence of bone, especially throughout the endoskeleton.

In lung fishes, endoskele­ton is primarily cartilaginous. The problem of buoyancy, with oily livers and hydrofoil fins, is remarkably present in cartilaginous fishes. Most bony fishes possess an adjustable, gas-filled swim-bladder that pro­vides neutral buoyancy, so they need not struggle to keep from sinking or bobbing to the surface.

Fishes are hero of the vertebrate story. Within this fish group, jaws and fins first appeared. Ray-finned fishes have been dominant aquatic vertebrates since the mid-Paleozoic. Fleshy finned fishes gave rise to land vertebrates, the tetrapods. In a sense then, the story of tetrapods is a continuation of what began in fishes (Fig. 1.48). 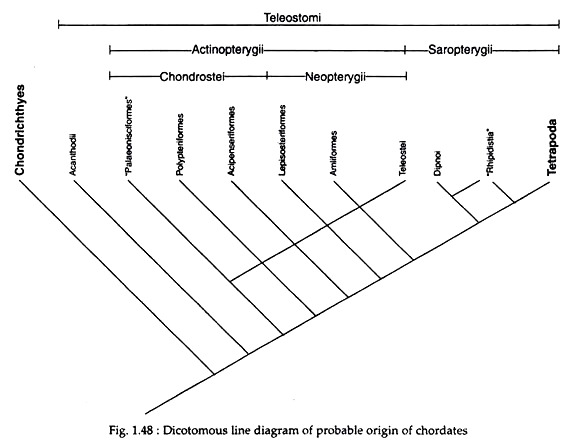 This common lineage is also recog­nisable in teieostomi. Tetrapods inherited paired appendages, jaws and backbones from fishes. The demands of terrestrial life and the new opportunities available led to a rather extensive re-modelling of the fish design as tetrapods diversified into terrestrial and eventually aerial modes of life.

Some other schemes of fish classification which are accepted by scientists: 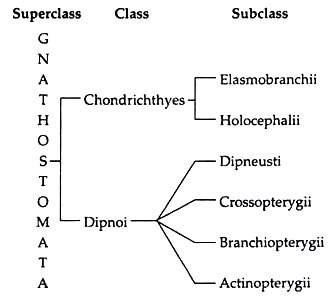