In this article we will discuss about the characters and classification of urochordata.

These animals are known as ‘sea squirt’. The life-history of urochordates passes through a dramatic change. Their chordate characters are more pronounced during larval period. While in adults they are more like invertebrates than chordates. Therefore, the characters are described in two heads — larval characters (Fig. 1.4) and adult charac­ters (Fig. 1.5). 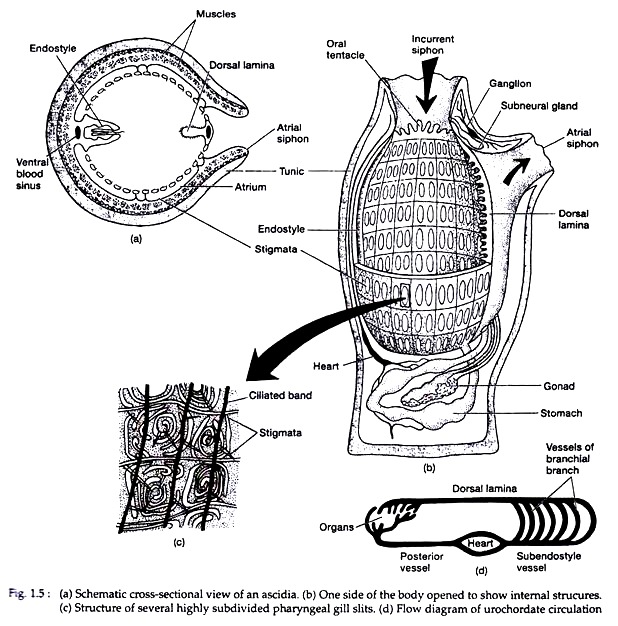 1. Elongated larva of Urochordata is known as ascidian tadpole larva. Adult emerges from the larva by the process of meta­morphosis.

1. The body of the adult is covered by a tunic (hence named Tunicata). The tunic is composed of a protein tunicin and a polysaccharide similar to plant cellulose.

2. Adults are sessile and attached to the substratum of the sea.

3. Incurrent branchial siphon, and ex-current atrial siphon, form entrance and exit portals for the water that circulates through the body.

6. These are hermaphrodite animals; repro­duce both sexually and asexually.

The characters and examples of these classes are given here:

2. Some species are solitary, others are colo­nial.

3. Adults are sessile, but larvae are plank

tonic and do not feed.

5. Most of the chordate characters that were present during larval period disappear during metamorphosis into adult.

6. In adult, nervous system transforms into a nerve ganglion. 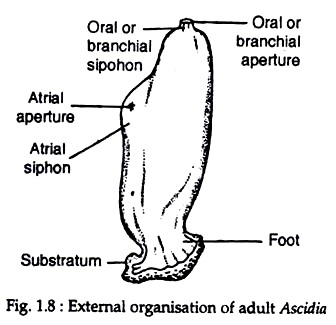 1. These are free-living pelagic urochor­dates.

2. The tunic is transparent and thin.

3. They possess encircling circumferential bands of muscles within the walls of the test.

4. Incurrent and ex-current siphons are pre­sent at opposite end of the body.

6. In the life-cycle polymorphism and clear alternation of generations are evident. 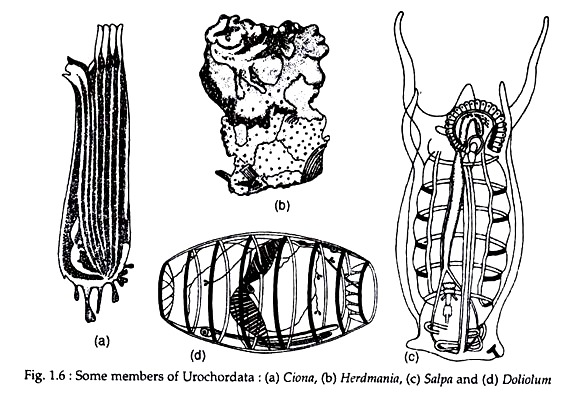 2. Larvacea received their name because the adults retain larval characteristics similar in some way to the ascidian tad­pole with its tail and trunk. The general resemblance of adult larvaceans to asci­dian tadpoles suggests that larvaceans may be neotenous form.

3. They produce a remarkable feeding apparatus (house) that consists of three components: screens, filters and expan­ded gelatinous matrix. Disturbed or actively feeding larvaceans abandon their old house and builds a new one.

7. A tubular nerve cord is present.

8. All species, except one, are monoecious, and most of these are protandrous. 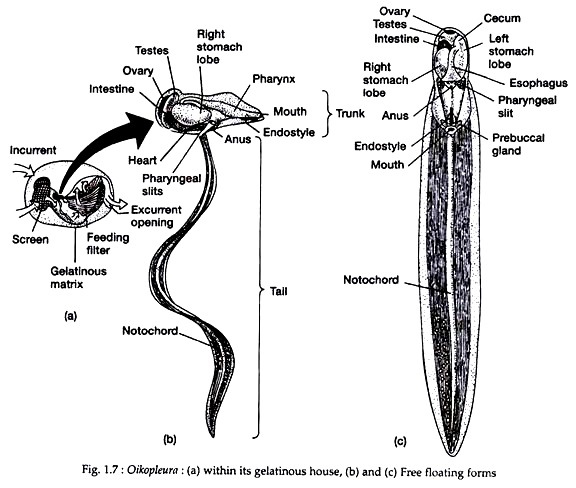