In this article we will discuss about the general characters and classification of Gnathostomata.

1. Two well formed jaws encircle the mouth aperture in all members of this group.

2. Paired and in some cases jointed appendages are present in Gnathostomata.

3. Calcified, bony skull and vertebra are characteristic features of Gnathostomata.

4. All fishes, amphibians, reptiles, birds and mammals are members of this group.

The classification of gnathostomes is a major field of controversy among authors. Authors differ greatly in the way they arrange the main divisions of the Gnathos­tomata. The classificatory scheme of Gnathostoma adopted here is that of J.Z. Young (1981).

Living fishes with jaws mostly fall into two well marked classes, the cartilaginous fishes (Chondrichthyes) and the bony fishes (Osteichthyes) including the familiar ray- finned fishes and the lung fishes. These two groups arose in the late Devonian period of geological time scale. Before that time vari­ous other types of fish dominated the waters. Classificatory scheme of fishes by J. Z. Young (1981) is shown: 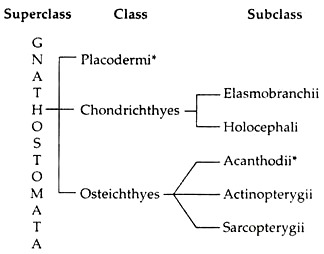 All the fishes of this group are extinct. Their epidermis were covered by heavy bony plates. Instead of gill slits they possessed spiracles for respiration.

1. Most of the members are marine and are carnivorous.

4. Median and paired fins are present. Fins are supported by cartilaginous fin rays.

5. Generally operculum is absent in these fishes, instead, gill slits are present.

6. Mouth is sub-terminal in position.

7. Jaws are armoured with rows of sharp teeth. These teeth are modified placoid scales.

8. A spiral valve is present in the intestine.

10. Caudal fin is of heterocercal type, i.e. two lobes of the fin are unequal.

11. Unisexual fish, males having clasper for reproduction. Clasper is the modified organ from pelvic fins.

12. Internal fertilisation is the characteristic of these fishes.

1. At the anterior end of the body 5 to 7 gill slits are present in each side.

2. Mouth is sub-terminal in position.

3. These fishes can swim with high speed.

4. Firm and hard jaws are provided with numerous sharp teeth.

6. There are some ribs in the thoracic cavity. 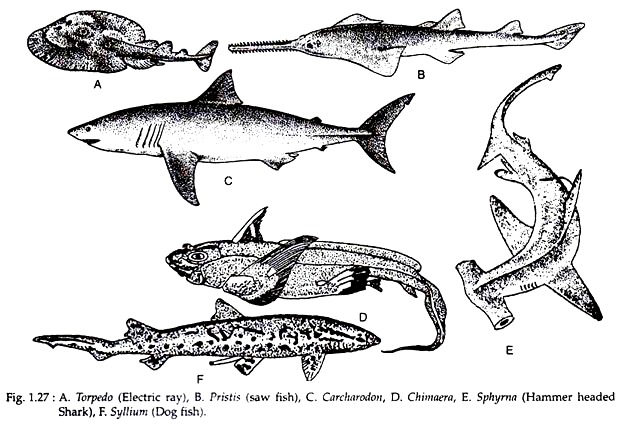 1. Small mouth aperture is guarded by jaws and lips.

5. Skin is naked in adults.

6. In addition to pelvic clasper males pos­sess another clasper on the head.