Subphylum: Plasmodroma Cilia absent; locomotion either by pseudopodia or flagella

Sub-order: Nuda Body naked or enclosed in a thin membrane.

2. It occurs in the colon of man and feeds on the mucous membrane destroying the tissues by an enzyme which it secretes.

4. It is dimorphic occurring in two forms:

Both these forms occur in man. Trophozoite is pathogenic, while minuta is non- pathogenic. 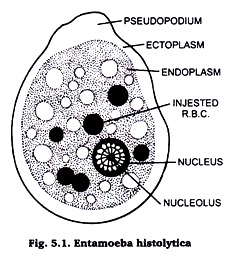 5. Cytoplasm is differentiated into ectoplasm and endoplasm.

8. One or two pseudopodia are present.

11. Mode of infection is oral through contaminated food or water with cysts of E. histolytica.

Entamoeba hystolytica is found as a parasite in the digestive tract of man, frog, and cockroaches in the tropical & subtropical regions.

Subphylum: Plasmodroma Cilia absent; locomotion either by pseudopodia or flagella 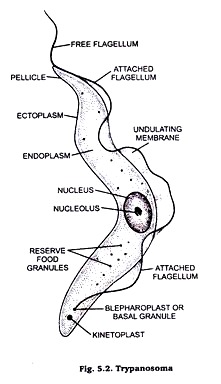 2. It has a colourless, slender, elongated, spindle-shaped body tapering at both ends, ranging in length from 15 to 16 micron.

3. Body is covered by the periplast or pellicle somewhat compressed laterally and twisted spirally.

4. The anterior end is more pointed than the posterior end and it bears the flagellum.

5. The body is convex on one edge and concave on the other, the convex edge of the body is thrown into irregular folds and is called undulating membrane.

6. Along the edge of the undulating membrane runs a stout thread or axoneme which is attached with the basal granule (blepheoplast) at the posterior end. Just posterior to the basal granule is a small rod-shaped body, the parabasal body (kinetoplast).

7. Nucleus is rounded and central in position.

9. Nutrition is saprozoic and all members are parasitic and pathogenic.

11. Most common species are as follows:

Trypanosomes are found as parasites in the blood of vertebrates and are transmitted to them by the blood sucking invertebrates.

Phylum: Protozoa Characters same as those of Tryponosoma 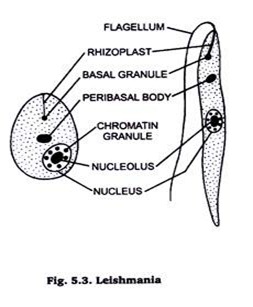 This form is oval or spherical 1-3 µ in diameter with a limiting membrane, the periplast or pellicle. The cytoplasm contains an oval nucleus, rod-shaped or dot-kinetoplast and aparabasal body. Reproduction by binary fission.

Phylum: Protozoa characters same as those of Tryponosoma 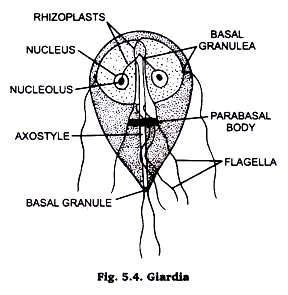 1. The body is bilaterally symmetrical and pear-shaped in appearance with the anterior end rounded and posterior end tapering.

3. Axostyles form the median longitudinal axis of the body.

7. The disease caused by this parasite is called giardiasis.

8. Its life cycle is monogenetic and infection to man occurs by the ingestion of its cysts with contaminated food and water.