Endoplasmic reticulum (ER) composes a system of membranes that enclose a space. The fluid content of cytoplasm is accordingly divided by the ER into two compartments the space enclosed within the membranes, which is termed as the luminal or cisternal space, and the region outside of the mem­branes which is the cytosolic space.

The occurrence of ER varies from cell to cell. In hepatocytes, both SER (smooth ER) and RER (rough ER) are present. The ery­throcytes, egg and embryonic cells lack ER. The adipose tissues, brown fat cells, adreno­cortical cells and endocrine cells of testes and ovaries contain only SER.

On the other hand, cells of organs involved actively in protein synthesis (e.g., acinar cells of pancreas, goblet cells, cells of some endocrine glands) are found to contain RER that are highly devel­oped. The size of ER varies considerably in different cell types and is related to their functions.

Both types of ER may occur in the following forms:

The cisternae are long, flat­tened, sac like, un-branched tubules, arranged parallely in bundles or stacks. Each sac is separated by a cytosolic space. RER usually exists as cisternae. 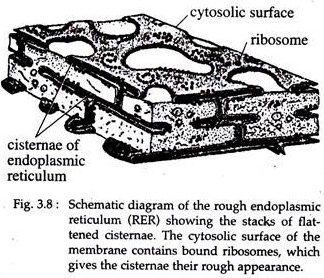 The membranous elements of SER are typically tubular. It forms an interconnecting system of pipelines curv­ing through the cytoplasm in which they occur. Tubular form of ER is dynamic in nature, i.e., it is associated with mem­brane movements, fission and fusion between membranes of cytocavity net­work (Fig. 3.9).

Following homogenization of cells, the SER fragments into smooth- surfaced vesicles, whereas the RER frag­ments into rough-surfaced vesicles. These two types of vesicles have diffe­rent densities, indicating different nature of their contents. Vesicles may often remain present in the cytoplasm of most cells (Fig. 3.9).

RER is bounded by rough walls because ribosomes remain attached with its outer surface. The ribosomes are present as polysomes held together by mRNA and are often arranged in typical ‘rosettes’ or ‘spi­rals’. The ribosomes appear to be attached to the membrane by large 60 subunit.

The cavi­ty of RER is sometimes very narrow, with two membranes closely apposed; but more frequently there is a true space between the membranes that may be filled with a material of varying opacity. The cells that are actively engaged in protein synthesis, such as plasma cells and goblet cells possess a dense macromolecular material inside the cister­nae.

Isolated RER contains two trans-mem­brane glycoproteins, such as ribophorin I and ribophorin II of molecular weighs 65,000 and 64,000 Daltons, respectively. These proteins tend to interact with each other arid form intramembranous network, which control the ribosome binding sites in the plane of the ER membrane. In general, RER is highly developed in cells of pancreas, liver, goblet cells, plasma cells etc.

The smooth ER though forms a continuous system with the RER, has a different mor­phology. It’s membrane is smooth and lack ribosomes. In general, SER are found in cells that are active in glycogen and lipid metabolism, such as, adipose cells, interstitial cells, glycogen storing cells of liver, sperma­tocytes and leucocytes etc.

In liver cells, SER consists of a tubular network that pervades large regions of the cytoplasmic matrix, rich in glycogen and looks as dense particles called glycosomes.

Under the electron microscope, these glyco­somes appear to be spheroidal in shape, with a diameter of 50-200 nm and show an inter­nal structure made of smaller particles of about 20-30 nm. Many glycosomes are also found to be attached to SER in the conduc­tion fibre of the heart.

By differential centrifugation, most of the components of the endomembrane system can be isolated in the so called microsomal fraction called microsomes or closed vesicles of either a rough or smooth form, that are not found in the intact cells.

In rat liver, the mem­branes of microsomes contain 60 to 70 per cent protein and 30 to 40 per cent phospho­lipid by weight. Thus, ER membrane contains more proteins, both in quantity and quality than the plasma membrane.

The membranes of ER are found to contain many enzymes, triglycerides, phos­pholipids and cholesterol. Most important ER enzymes include stearates, NADH-cytochrome C reductase, NADH-diaphoresis, glucose-6-phosphatase, glycosyl transferase and Mg++ activated ATPase. The various enzymes have different topologies with respect to the luminal or cytoplasmic sur­faces of the ER.

According to current concepts, membrane biogenesis is a multi-step process that involves the synthesis of a basic membrane of lipids and intrinsic proteins. Then the addition of the other components, such as enzymes, sugars or lipids occur in a sequential manner. The insertion of protein into ER membrane is independent of that of the lipids.

Some pro­teins of the ER are formed by the ribosomes in the cytosol which then become inserted into the membrane. In ER, the phospholipids are distributed more rapidly between two mono­layers than that into the plasma membrane.

Within the cell the ER act as a circulatory system for intracellular circulation of various substances.

The route of circulation is as follows:

RER → SER → Golgi complex → lysosome or transport vesicles or secretory granules. In this route, various particles, molecules and ions may be carried into and- out of the cells. Export of RNA from nucleus to cytoplasm may also occur by this circula­tion.

The membranes of ER are found to conduct infra-cellular impulse, e.g., the sarcoplasmic reticulum of muscle transmits impulses from the surface membrane into the deep region of the muscle fibre. Exchange of molecules by the process of diffusion and active transport may take place across the ER membrane.

As in plasma membrane, the ER membranes possess carriers and permeases that are involved in active transport. By dividing the fluid content of the cell into compartments, the ER provides skeletal framework to the cell and thus gives mechanical support for the colloidal matrix of the cytoplasm.

A. Special Functions of SER:

i. Synthesis of Lipids:

Phospholipid biosynthesis is largely confined to the membranes of SER. Studies with radio-active precursors indicate that the newly synthe­sized phospholipids are rapidly transferred to other cellular membranes by the help of specific phospholipid exchange proteins.

SER is found to be related to glycogenolysis or breakdown of glycogen. In prenatal liver cells, the glycogen depletion is accompanied by an increase in SER. On the other hand, glucose-6-phosphatase present in the SER membrane removes the phosphate group, generating glucose molecules from glucose-6-phosphate that ultimately move into the blood for the maintenance of the functions of red blood cells and nerve tissues.

Many enzymes present in membrane of SER have a key role in the synthesis of cholesterol, the precursor of steroid hormones and bile acids.

SER helps in detoxi­fication of a wide variety of zenobiotics (toxic materials of both endogenous and exogenous origin) in the liver such as, barbiturates, ethanol, aspirin and petroleum products.

Detoxification is carried out by a system of oxygen transferring enzymes (oxygenases), which include the cytochrome P450s. These enzymes lack substrate specificity and are able to oxidize innumerable hydrophobic compounds into more hydrophilic, more readily excretable derivatives.

However, these enzymes may also convert the harmless compound benzo [a] pyrene into a potent carcinogen. The regulated release of Ca++ from SER membranes triggers specific cellular respon­ses including, the contraction of skeletal muscle cells.

B. Special Functions of RER:

i. Synthesis of Proteins on Membrane Bound Ribosomes:

Proteins that are secreted from the cells, or act as integral membrane proteins or proteins of certain organelles like Golgi complex, lysosomes, endosomes are assembled on ribosomes attached to the outer surface of RER membranes.

These pro­teins contain a signal sequence of 6 to 20 non-polar amino acid residues. It targets the nascent polypeptides for the ER membrane and leads to the compartmentalization of the polypeptide within the ER lumen.

A signal recognition particle (SRP), recognizes the sig­nal sequence and acts as a ‘tag’ that allows the SRP-ribosome-nascent polypeptide to bind to an SRP receptor located on the cytosolic surface of the ER membrane.

Thus, these proteins, instead of passing into the cytoplasm, appear to pass into the cisternae of the RER, and are protected from action of cytoplasmic protease enzyme. As one nascent polypeptide enters the RER cister­nae, it acts upon by a variety of enzymes located either within the membrane or in the lumen of the RER. These enzymes transform the nascent proteins into their proper func­tional state.

Integral membrane proteins, such as glycophorin and a fraction of the erythrocyte plasma membrane are synthesized on mem­brane bound ribosomes and trans-located through the ER membrane as the polypep­tides elongate.

Integral proteins contain one or more stretches of hydrophobic amino acids that serve as stop-transfer sequences, which block further movement of these proteins into the cisternal chamber, but trigger the opening of the channel laterally and cause the inser­tion of the hydrophobic helix into the lipid bilayer.

The enzymes involved in the synthesis of phos­pholipids are themselves integral proteins of the RER membrane with their active sites fac­ing the cytosol.

The addition of sugars is catalyzed by a group of membrane-bound enzymes called glycosyl-transferase. If a gly­coprotein is to contain a terminal glucose, fucose or sialic acid, then these sugars are added into the Golgi apparatus where the required transferase enzymes are present.

The cisternae of the RER are typically large with flattened cavities that can act as transport channels for membrane and luminal proteins to be moved from their site of synthesis to the apical tips of the RER.

The apical edges of the RER cis­ternae are typically smooth surfaced i.e., devoid of ribosomes and are referred to as transitional elements, which serve as sites of formation of the first set of transport vesicles in the biosynthetic pathway leading towards Golgi complex.