In sexually reproducing organisms, the production of offspring includes the union of two cells (gametes), each with a complete set of chromosomes through the process of ferti­lization. The doubling of chromosome num­ber that occurs at fertilization is compensated by an equivalent reduction in the number of chromosomes at a stage prior to the forma­tion of the gametes.

Meiosis is the process during which the chromosome number is reduced so that cells are formed that contain only one member of each pair of homologous chromosomes. Thus, meiosis ensures pro­duction of a haploid phase in the life cycle, while fertilization ensures the restoration of diploid phase. Without meiosis, sexual repro­duction would not be possible.

In both animals and plants, marked differences exist with respect to the stage within the life cycle at which meiosis occurs and the duration of haploid phase. Based on this the following three groups can be identified:

i. Terminal or Gametic meiosis:

It is found in all multicellular animals, many protozoans and in a few lower plants. In terminal meiosis, the meiotic division occurs immediately before the formation of gametes. In vertebrate’ egg, meiosis is however, completed after fertilization (see gametogenesis).

It is the characteristic of flowering plants. Here meiosis takes place at a stage unrelated to either gamete formation or fertiliza­tion. Following the union of male gamete Schematic representation of different stages of and a female gamete, the diploid zygote is formed, which undergoes mitosis and develops into diploid sporophyte.

At some stage in the development of sporo­phyte, sporogenesis (which includes meiosis) occurs, producing spores that germinate directly into a haploid gametophyte.

In mitosis, the chro­mosomes are doubled and then divided between two daughter nuclei through a single division. In meiosis, the doubling of chromosomes is followed by two sequential divisions viz., first meiosis and second meiosis.

These two divisions distribute the chromosomes among four haploid cells. The first meiotic division includes a long prophase in which homologous chromo­somes become closely associated to each other and interchange of hereditary material takes place between them.

Like other cell division, the preclude to meiosis includes the replication of the DNA that occurs in the phase. The pre-meiotic S phase generally takes several times longer than a pre-mitotic S phase.

Both the meiotic divisions include the usual stages of cell division, viz., prophase, metaphase, anaphase and telophase. The prophase of first meiosis is so long and complex, that it is customary to divide it into several sub stages. Thus, the successive meiotic stages and sub-stages can be represented as follows. 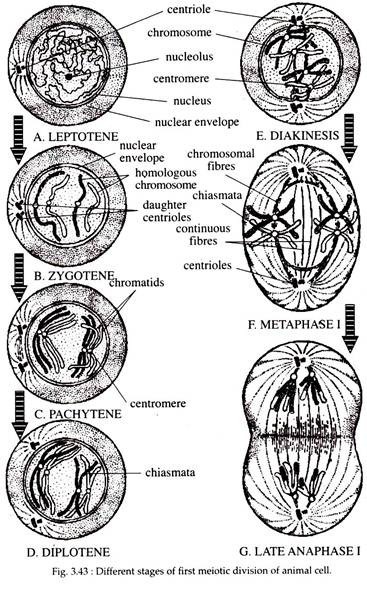 Meiosis starts after an interphase which is not very different from that of an inter-mitotic interphase. Following several mitotic divisions of the meiotic cells like spermato­gonia or oogonia, a “switch” shifts these cells from mitosis to meiosis.

Prophase, the first stage of first meiosis may be of very long duration in some cases. For example, in human female, every oocyte in the ovary has entered meio­tic prophase I at approximately the time of birth and many of these oocytes may remain in the same approximate stage of prophase for several decades as no additional oocytes are produced during an individual’s lifetime.

Since the first prophase is long and complex, it is customary to divide this stage into following stages (Fig. 3.43(A-E)).

In this early prophase stage of meiosis, the chromo­somes are extremely thin, long and uncoiled and thus are difficult to observe. However, the sex chromosomes may look like a com­pact heteropyknotic bodies.

In the leptotene stage the nucleus increases in size. In the light microscope, the chromosomes appear to be composed of single chromatid, though DNA duplication has already occurred at an earlier stage.

In the electron microscope, however, the chromosomes are revealed to be composed of paired chromatids. The chro­mosomes show bead like thickenings, the so- called chromomeres at irregular intervals along the length.

Frequently, the leptotene chromosomes show a specific orientation inside the nucleus and form loops with the end attached to the nuclear envelope at points near the centri­oles. In the cytoplasm, the centriole dupli­cates and each daughter centriole migrates towards the opposite poles of the cell. On reaching the poles, each centriole duplicates and thus, each pole of a cell possesses two centrioles of a single diplosome.

During zygonema an important phenomenon of meiosis occurs. The homologous chromo­somes which come from the mother (by ova) and father (by sperm) become aligned and undergo pairing.

The process of pairing is often referred to as synapsis which is very specific and results in the formation of a spe­cial structure called synaptonemal complex (SC). Synapsis does not have any specific starting point and may be of three types:

Synapsis of homologous chromosomes starts from the end and continues towards their centromeres.

Homologous chromosomes start pairing from their centromeres and the pairing progre­sses towards the ends of the homologues.

It occurs at various points of the homologous chromosomes. In each homologue, synapsis takes place point for point and chromomere for chromo- mere. The two homologues do not fuse during pairing, but remain separated by a space of about 0.15 to 0.2 µm, which is occu­pied by the SC.

In cross section, SC appears to be a flattened, ribbon-like structure. The late­ral arms are formed of electron-dense coarse granules or fibres, and are joined to the adja­cent chromosomes by fine fibrils.

Eacli pair of synapsed homologous chromosomes at this point is referred to as bivalent or dyads because it consists of two visible chromo­somes or as a quadrivalent or tetrad because of the presence of four visible chromatids.

Under electron microscope, a number of elec­tron dense bodies about 100 nm in diameter are seen at irregular intervals, within the center of the SC. These structures are called recombination nodules, because they are believed to contain the machinery that facilitates genetic recombination.

In late pachytene, a line of separation perpendicular to the plane of pairing appears, and the four chromatids become more visible. The space occupied by the SC is maintained and the homologous chromo­somes finish the pairing process. During late pachynema, two of the chromatids of the homologues exchange segments (i.e., recombine).

Transverse breaks occur at the same level on each of the chromatids and that event is followed by interchange of chro­matid segments and its final fusion. This is called recombination (genetic) or crossing over. Pachytene is the longest phase of prophase and may last for days, weeks, or even years, whereas leptotene and zygotene generally last for a few hours.

The begin­ning of diplotene is recognised by the disso­lution of the SC and the tendency of the homologous chromosomes of the bivalents to pull away from each other. As the homolo­gous chromosomes move apart, they are seen to remain attached to one another at specific points, termed chiasmata (singular chiasma) (Fig. 3.43).

These chiasmata are located at the sites on the chromosomes at which genetic exchange or recombination or crossing-over had previously occurred, by which chromo­some segments with blocks of genes are exchanged between the non-sister chro­matids of homologous members of the pairs.

Chiasmata are found in most plants and animals and for each bivalent at least one chiasmata is formed. Their number is vari­able and may be one to several (Fig. 3.44). 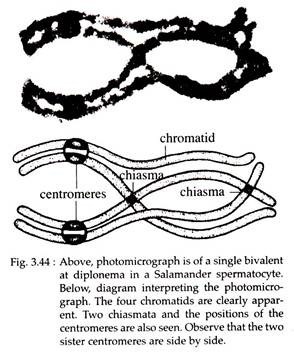 Diplotene is a long-lasting phase. The human oocytes reach the diplotene phase in the fifth month of prenatal life and remain in it until many years later, when ovulation occurs.

In spermatocytes and oocytes of many fish, amphibia and reptilia, the diplotene chromosomes become dispersed into a particular configuration not found at any other time during the life cycle of the organism. Chromosomes in this configura­tion are called lampbrush chromosomes in which the chromonema uncoils into loops that converge upon a more coiled axis.

The final stage of meiotic prophase I is called diakinesis. During this stage the chromosomes again contract (Fig. 3.43E). In the nucleus, the tetrads are more evenly distributed. The nucleolar envelope breaks down and the nucleolus disappears.

The chiasma moves from the centromere towards the end of the chromosomes and the intermediate chiasmata diminishes. This type of movement of the chiasmata is known as terminalization. The chromatids still remain connected by the terminal chiasmata and these exist till the metaphase.

The chromosomes become more condensed in the spiral manner and get arranged on the equator. The nuclear envelope breaks down and the spindle microtubules get arranged in the form of spindle in between the two centrioles which occupy the position on two opposite poles of the cell.

Each homologue is attached with the spindle to one pole by the homologous kinetochore. Thus the two sister chromatids behave as a functional unit.

Chromosomes become arranged at the equator. During metaphase I the homologues are still attached by chias­mata at their ends while the centromere of each chromosome is directed towards the opposite poles. The repulsive forces between the homologous chromosomes increase greatly and the chromosomes become ready to separate (Fig. 3.43F).

Homologues become free from each other and due to the shortening of chromosomal fibres or micro-tubules, each homologous chromosome with its two chro­matids and undivided centromere moves towards the opposite poles of the cell.

The short chromosomes, generally connected by a terminal chiasma, separate rapidly. Separation of long chromosomes, which have interstitial and un-terminalized chiasmata, are delayed.

The actual reduction in chromosome number and disjunction occurs at this stage. It is important to note that the homologous chromosomes which move toward the oppo­site poles are the chromosomes of either paternal or maternal origin.

Following telophase, is a short inter­phase, which is very similar to that of mito­sis. During this time, there is no replication of the chromosomes. The chromosomes are now haploid in number, although each one has two chromatids. Following meiosis I, two daughter nuclei are formed, which in animals are called secondary spermatocytes (in male), and secondary oocyte plus the first polar body (in female).

The second or homotypic meiosis is actu­ally the mitotic division that divides each haploid meiotic cell into two haploid cells. It includes the following stages.

In the cytoplasm, each cen­triole divides and each pair of centriole migrates to the opposite poles. The micro­tubules get arranged in the form of spindle at right angles to the spindle of first meiosis. The nuclear membrane and the nucleolus disappear. The chromosomes become more shorter and thicker (Fig. 3.45).

During metaphase II, the chromosomes get arranged on the equatorial plane. The kinetochore divides into two and the microtubules of the spindle are attached with centromere of the chromosomes.

The two sister chromatids on the two daughter chromosomes move towards the opposite poles due to shortening of chromosomal microtubules and stretching of inter-zonal microtubules of the spindle (Fig. 3.45). Thus, following karyokinesis or nuclear division, four daughter nuclei each with haploid set of chromosomes are formed. After that, cytokinesis occurs resulting in four haploid cells.

i. Meiosis results in the halving of chromo­some number and thus maintaining a definite and constant number in organisms.

ii. The homologous kinetochores separate in anaphase I and the sister kinetochores, in anaphase II. As because crossing-over mixes the homologous chromatids of the bivalents, both meiotic divisions are needed to segregate the genes contained in the chromatids. From a genetic point of view, meiosis is a mechanism for dis­tributing the genes between the gametes which permits their recombination and random segregation.

iii. As a result of crossing-over, each chro­mosome does not consist solely of mater­nal or paternal material but of alterna­ting segments of each. Thus, by crossing over, meiosis provides an opportunity for the exchange of the genes and thus, evolutionary process.