In this article we will discuss about:- 1. Meaning of Nucleus 2. Structure of Nucleus.

Robert Brown for the first time in 1833 discovered a prominent body within the cell and termed it nucleus. Later on, in 1934 the German biologist J. Hammerling, demonstra­ted that the nucleus determines the characters of a cell and ultimately the characters of an individual.

On the basis of presence or absence of well-defined nucle­us, cells are classified into two groups:

(i) Prokaryotic cells with no organised nuclei (without nuclear membrane) and

The prokaryotes include bacteria and blue green algae, while eukary­otes include all higher organisms. The nuclear equivalent of a prokaryotic organism is known as prokaryon or more commonly as nucleoid, rather than a nucleus.

Within the envelope of an inter­phase (non-mitotic) nucleus, there are:

(iii) One or more nucleolus and

Usually one cell contains one nucleus but the number may vary from cell to cell. Paramoecium and cells of liver and cartilage contain two nuclei and in plants, certain fungi and some protozoans are best example of poly-nucleated cells. The size of the nucle­us of a cell depends on the volume of the cell, amount of DNA and proteins, and metabolic phase of the cell.

Under light microscope, nucleus is visualized as a viscous mass surrounded by a distinct envelope. One or several nucleoli can also be observed inside the nucleus. However, under electron microscope (EM) a typical eukaryotic interphase (non-mitotic) nucleus appears to have some other compo­nents.

The nucleus under EM, appears to be composed of:

(i) Nuclear mem­brane or nuclear envelope, 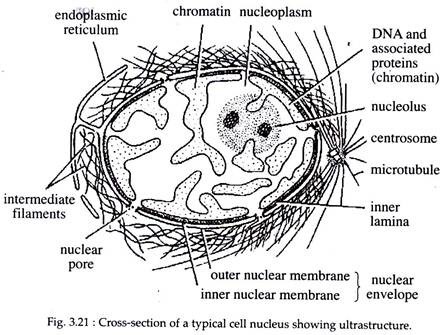 The nuclear envelope is a special perinuclear cisterna of the cell endomembrane system at the boundary between the nucleus and the surrounding cytoplasm of an eukaryotic cell. It consists of two concentric membranes separated by a perinuclear space of 10 to 15 nm.

The two membranes are fused at sites forming a circular pore that contains a complex assem­bly of proteins. The average mammalian cell contains approximately 3,000 nuclear pores. The outer membrane is generally studded with ribosomes and is often seen to be conti­nuous with the membrane of endoplasmic reticulum (Fig. 3.22).

The lamina is thought to act as a structural support for the nuclear envelope and to serve as a site of attachment for the chromatin fibres at the nuclear periphery. The disassembly of the nuclear lamina prior to mitosis is thought to be induced by phos­phorylation of the lamins by a specific kinase enzyme.

Nuclear pores contain a complex, basket like apparatus, called the nuclear pore complex (NPC) that fills the pore like a stopper, projecting out­ward into both the cytoplasm and nucleo­plasm. The NPC is a huge molecular complex that exhibits octagonal symmetry and con­tains an estimated 100 to 200 polypeptides. The mass of an NPC is approximately 30 times that of a ribosome.

Electron micro­graphs of NPC revealed that it has four sepa­rate elements:

(i) The scaffold is a stack of three closely apposed rings; the cytoplasmic ring, the nucleoplasmic ring and a central ring of thick spokes,

(ii) The central hub or transporter is a proteinaceous ring and con­sists of two irises of eight arms each,

(iv) A basket attached to the nucleoplasmic side of the pore (Fig. 3.23). Nuclear pore complexes are the sites of exchange of macro molecules like proteins, RNAs etc. between the cytoplasm and the nucleus. Each single pore is capable of bi-directional transport (import or export) Which is facilitated by the presence of signal sequences. 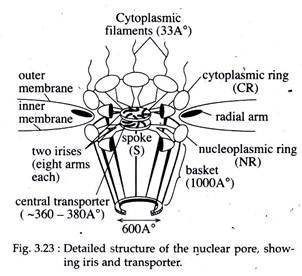 In all types of higher organisms, the well organised nucleus contains definite number of chromo­somes of definite size and shape. The chro­mosomes are invisible in the interphase nucleus but seem to appear out of nowhere at the beginning of mitosis and disappear once again following mitosis.

It has long been known that chromosomes consist of fibres, called chromatin, that are composed of DNA and associated proteins. The structure and function of chromatin fibre (chromosomes) have been discussed separately elsewhere.

If lipids, histone, non-histone proteins and DNA fibres are removed from the nucleus, the structure that remains possesses the same shape as the original nucleus but is composed of a net-work of thin protein, containing fibrils crisscrossing through the nuclear space. This insoluble fib­ril or network is called nuclear matrix.

It serves as more than a skeleton to main­tain the shape of the nucleus or a scaffold on which loops of chromatin are organised. It also serves to anchor much of the machinery that is involved in the various activities of the nuclei, including transcription, RNA proce­ssing and replication.

Every eukaryotic cell con­tains one or more spherical, colloidal acido­philic bodies, called nucleoli (Fig. 3.21). A nucleolus is often associated with a parti­cular region of nucleolar organising chromo­some that is called nucleolar organizer (NO) representing the secondary constriction.

Nucleolus is the site of ribosome biosyn­thesis, where the synthesis of ribosomal RNA (rRNA) and the assembly of ribosome take place. Within the nucleolus there are three distinct regions in relation to the ribosome formation.

(i) Fibrillar centre (FC), where rRNA genes of NO are located; the transcription of rRNA genes also takes place in this region,

(ii) Dense fibrillar component (DFC), which surrounds the fibrillar centre and where RNA synthesis progresses. The 80 S ribosomal proteins (rps) also bind to the transcripts in this region,

(iii) Cortical granu­lar component (GC) is the outermost region having granules of 15 to 20 nm.

Here pro­cessing and maturation of pre-ribosomal par­ticles occur (Fig. 3.24). The transcription for the synthesis of pre-RNA actually occurs in FC and particularly at its edge in a region described as transcription zone (txn). Like Sn RNAs (small nuclear RNAs) more than 50 types of small nucleolar RNAs are found in nucleolus. Some of these are involved in pro­cessing of pre-rRNA.

Nucleolus disappears during mitosis and reappears at the next interphase. It is sug­gested that pre-nucleolar bodies are the pre­cursors of newly formed nucleoli but the actual mechanism of nucleogenesis is still unknown.

The nucleolar compo­nents such-as the chromatin threads and the nucleolus remain suspended in a trans­parent, semi-solid, granular and slightly acidophilic ground substances, called nucleo­plasm or nuclear sap or karyolymph.

It is composed of mainly the nucleoproteins but also contains other inorganic and organic substances, viz., nucleic acids, proteins, enzymes and minerals. The most common nucleic acids of the nucleoplasm are the DNA and RNA.

Proteins present in nucleo­plasm are of two types:

(i) Basic proteins or histones that are rich in arginine, lysine and histidine, 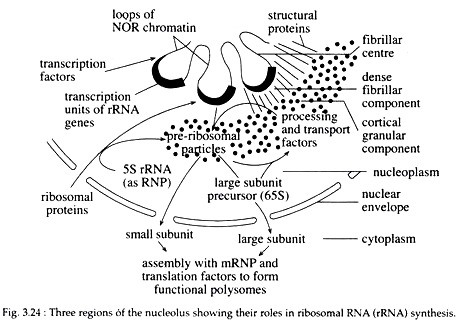