In this article we will discuss about:- 1. Meaning of Ribosome 2. Types of Ribosome 3. Structure 4. Chemical Composition 5. Biogenesis 6. Functions.

Ribosomes are small, rounded, dense particles of ribonucleoprotein. They occur either freely in the cytoplasm and the matrix of mitochondria and chloroplast or remain attached with the membranes of the endoplasmic reticulum and nucleus.

They are the sites of protein synthesis in both prokaryotic and eukaryotic cells. The cells in which active protein synthesis takes place (e.g., pancreatic cells, hepatic parenchymal cells, plasma cells, thyroid cells etc.), the ribosomes remain attached with the membranes of RER.

Cells which synthesize specific proteins for the intracellular utilization and storage like erythroblasts, skin etc. contain large number of free ribosomes in the cytoplasm. Ribosomes are usually designated accor­ding to their rates of sedimentation. The sedimentation co-efficient is expressed in the Svedberg unit, or S unit (S is related with the size and molecular weight of the ribosomal particles).

According to the size and sedimentation co-efficient two types of ribosome have been recognized (Table 3.3).

They are found in prokaryotic cells of blue green algae and bacteria. They are smaller in size and have the sedimentation co-efficient of 70S and molecular weight 27 x 106 Daltons.

The general structures of prokaryotic and eukaryotic ribosomes are similar. Each ribosome is porous, hydrated and composed of two subunits. One subunit is large in size and has a dome-like shape, while the other subunit is smaller in size and occurring above the larger subunit, forming a cap-like structure.

In 70S ribosome the large subunit is 50S and the smaller is 30S. The 80S ribo­somes also consist of two subunits, viz., 60S and 40S. Both subunits remain separated by a narrow cleft. The two subunits remain united with each other due to high concentration (0.001 M) of the Mg++.

When the concentration of Mg++ reduces in the matrix, both ribosomal subunits get separated. In bacterial cells, the two subunits are found to occur freely in the cytoplasm and they unite only during protein synthesis.

During protein synthesis in both prokaryotes and eukaryotes, many ribo­somes bind to an individual mRNA mole­cule. The ribosomes are spaced as close as 80 nucleotides apart along a single messenger RNA molecule. The structures are called polyribosomes or polysomes (Fig. 3.16). 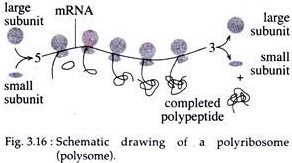 i. Quasi-symmetrical Model (Stoffler and Wittmann, 1970):

According to this model, the smaller 30S subunit of prokaryote ribosomes has a bipartite structure with an elongated, slightly bent pro-late shape. A trans­verse cleft divides the subunit into two parts; a smaller head and a larger body, giving it the appearance of a ‘telephone receiver or embryo’.

Under electron microscope, the frontal view of larger subunit shows three protuberances (Fig. 3.17) arising from a rounded base; the central being the most prominent and often gives the larger subunit the appearance of an arm chair (the rounded base forms the vaulted seat, the central protu­berance forms the back and the lateral protu­berances the arm of the chair) or a maple leaf. 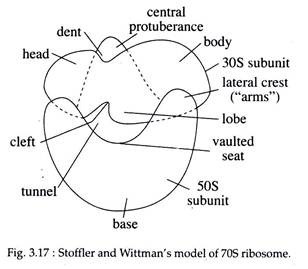 According to this model, the smaller subunit has a head, a base and a platform (Fig. 3.18). The platform separates the head from the base by a cleft.

The cleft is an impor­tant functional region the site of codonanticodon interaction and part of binding site for the initiation factor of protein synthesis. On the other hand, the large subunit consists of a ridge, a central protuberance and a stalk. The first two are separated with the help of a valley. 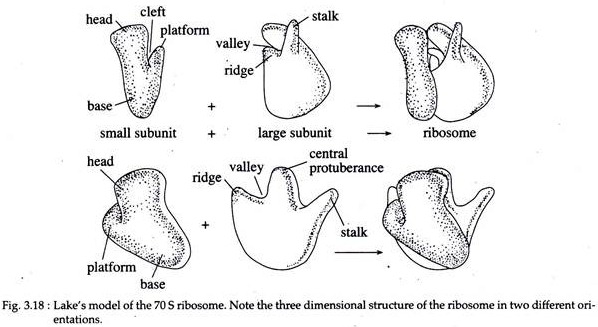 The cytoplasmic ribosomes of eukaryotes are remarkably similar in morphology to those of the prokaryotes. Like the 30S subunit of prokaryotes, the 40S subunit of eukaryotes is divided into head and base segments by a transverse groove (Fig. 3.19). The 60S subunit is rounded in shape, although its one side is flattened and it becomes confluent with the small subunit during the formation of the monomer.

Chemically the ribosomes are composed of RNA and proteins. More than half of the weight of ribosome is RNA. The 70S ribo­somes contain three types of rRNA, viz., 23S rRNA, 16S rRNA and 5S rRNA. 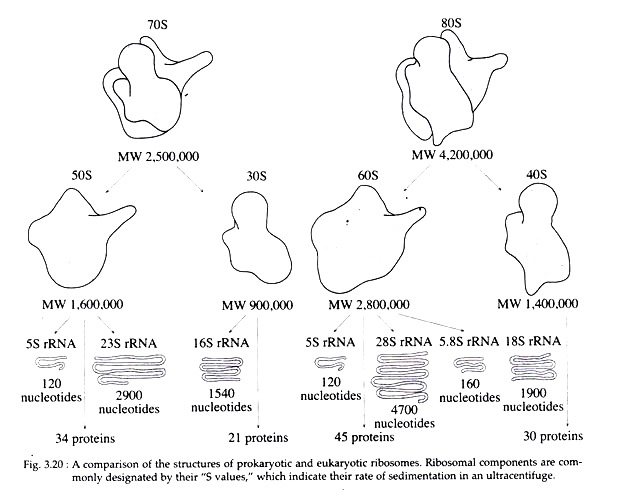 About 60 percent of the rRNA is helical or double stranded and contains paired bases. These regions are due to hairpin loops between complementary regions of the linear molecules. In ribosome, the RNA is exposed at the surface of the ribosomal subunits and the protein is assumed to be in the interior, in relation to non-helical part of the RNA.

In E.coli, all the proteins of the two sub- units are different, with the exception of one that is present in both subunits (S 20 and L 26). So, the total number of proteins in one ribosome is 54. Most of them are rich in basic amino acids. The smaller subunit (40S) of eukaryotic ribosome is composed of approxi­mately 30 proteins and the larger subunit (60S) contains about 45 proteins.

In addition to rRNA and proteins, ribo­somes also contains some divalent metallic ions, such as Mg++, Ca++‘and Mn++. However, eukaryotic ribosomes do not differ functionally from those in prokaryotes; they perform the same functions by the same set of chemical reactions. Eukaryotic ribo­somes are able to translate bacterial mRNAs efficiently, provided that a ‘cap’ is added enzymatically.

Ribosomes are not self-replicating parti­cles. The synthesis of various components of ribosomes such as rRNAs and proteins are under genetic control. In E. coli the synthesis of ribosomal proteins is controlled at the translational level.

Some of the ribosomal proteins that bind directly to rRNA can also bind to similar structure in their own mRNA. In eukaryotes, the biogenesis of ribosomes is the result of the co-ordinated assembly of several molecular products that converge upon the nucleolus.

During protein synthesis, ribosomes play a protective function. The mRNA strand which passes between two subunits of the ribosome is protected from the action of nucleases. Similarly the nascent polypeptide chains passing through the tunnel or channel of the larger subunit of ribosome are protec­ted against the action of protein digesting enzymes.