Mitochondria (Greek, mito; thread, chondrion; granule), the granular or filamen­tous cell organelles that are present in the cytoplasm of aerobic cells of higher animals, plants and some microorganisms including protozoa, algae and fungi.

They are absent in bacterial cells. They contain a ‘battery’ of enzymes and coenzymes that interact to catalyse cellular energy transformation. The enzymes also produce specific DNA for the cytoplasmic inheritance and ribosomes for protein synthesis.

At the end of the 19th century, Altmann (1894) first observed mitochondria and described the organelle as ‘bio-blasts’. The present name mitochondria was coined by Benda in 1897. The final demonstration that the mitochondria was indeed the site of cellular respiration was made in 1948 by Hogeboom and co-workers. Mitochondria are very dynamic organelles and may inter­act extensively with other cellular structures.

The shape of mitochondria varies accor­ding to the functional stages of the cell. In general, these organelles are filamentous or granular. A long mitochondrion may swell at one end to assume the form of a club or be hollowed out to take the form of a tennis racket.

At other times, mitochondria may become vesicular by the appearance of a central clear zone. The size of mitochondria is also variable; however, in most cells the width is relatively constant (about 0.5 µm), and the length is variable, reaching a maxi­mum of 7 µm.

They are uniformly distribu­ted throughout the cytoplasm, but there may be exceptions. For example, in certain muscle cells, mitochondria are grouped like rings or braces around the I-band of the myofibril, or in sperm they are wrapped tightly around the flagellum.

The number of mitochondria in a cell depends on the type and functional state of the cell. A normal liver cell contains between 1,000 and 1,600 mitochondria, but this number diminishes during regeneration and also in cancerous state. The number may be as high as 3,00,000 in some oocytes, and some algal cells may contain only one mito­chondrion.

Each mitochondrion is bounded by two highly specialized mem­branes. An outer limiting membrane, about 6 nm thick, surrounding the organelle. Within this membrane, separated from it by a space of about 6 to 8 nm, is an inner membrane. The inner membrane projects into the mito­chondrial cavity and forms complex infoldings called mitochondrial crests.

This inner membrane divides the inner mitochondrial space into two chambers or compartments:

(b) The inner chamber, that is filled with a relatively dense, homogeneous gel like proteinaceous material usually called the mitochondrial matrix. In some cases, the matrix contains a finely filamentous material, or highly dense small granules (Fig. 3.13).

These granules contain phospholipids, which give them an affinity for calcium. Within the matrix small ribosomes (55S), circular DNA, some soluble proteins and lipids are present. 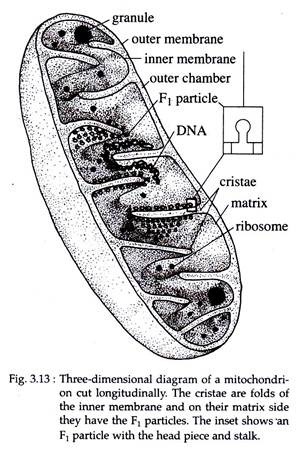 In general, the mitochondrial crests are incomplete septa or ridges that do not interrupt the continuity of the inner chamber; thus the matrix is continuous within the mitochondrion. The cristae of animal cells are usually lamellar or plate-like, but in many protozoa and in steroid synthe­sizing cells including the adrenal cortex and corpus luteum, they occur as regularly packed tubules.

The cristae greatly increase the area of inner membrane. In liver cell mitochondria, the cristae membrane is 3-4 times greater than the outer membrane area. The number of cristae may also vary in different cell types. For example, mitochon­dria of heart, kidney and skeletal muscle cells have more extensive cristae arrangements but the non-myelinated axons of rabbit brain have only one cirsta.

If a mitochondrion is allowed to swell and break in a hypotonic solution and is then immersed in phospho-tungstate, the inner membrane in the crest appears covered by particles of 8.5 nm. These particles have a stem linking each with the membrane (Fig. 3.14).

These particles are called ‘elementary’ or ‘F1‘ or F0-F1‘ particles and are regularly spaced at intervals of 10 nm on the inner surface of these membranes. There may be 104-105 elementary particles per mitochondrion. Actually these particles correspond to a special ATP synthase involved in the coupling of oxidation and phosphorylation.

The F0 base piece remains embedded in the membrane and consists of three different subunits in the ratio of 1a : 2b : 12c. The b subunit of F0 extends into the head piece and forms the stalk (stem) (Fig. 3.14). 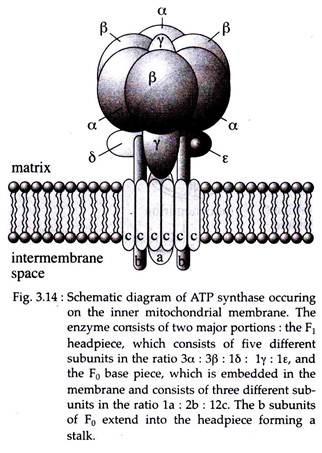 The presence of such F1 particles on the matrix side (M) confers to the inner mito­chondrial membrane, a characteristic asym­metry that is of fundamental importance to its function i.e., formation of ATP.

Isolation of mitochondrial membranes; struc­tural and chemical differences between outer and inner membranes:

The mitochondrial membranes can be separated by density gradient centrifugation. The outer membrane is separated by causing a swelling which can be brought about by breakage followed by contraction of inner membrane and matrix.

Certain detergents like digitonin and lubrol are often used for this purpose. When outer membrane is removed with digitonin, the so-called mitoplast is formed. Mitoplast includes the inner mem­brane with unfolded cristae and matrix.

The isolated outer membrane is revealed by nega­tive staining as a ‘folded bag’ with smooth surface (Fig. 3.15). The mitoplast has pseudopodic processes and is able to carry out oxidative phosphorylation. 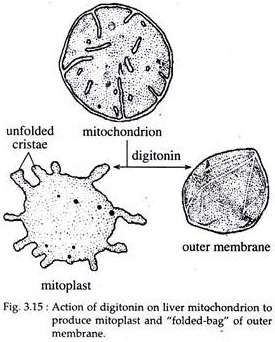 The gross chemical composition of the mitochondria varies in different animal and plant cells. In general, mitochondria are found to contain 65 to 70% proteins, 25 to 30% lipids, 0.5% RNA and small amount of DNA.

The lipid content’ of mitochondria are composed of 90% phospholipids, 5% or less cholesterol and 5% free fatty acids and triglycerides. The inner membrane is rich in the phospholipid, called cardiolipin that makes the membrane impermeable to vari­ous ions and small molecules.

The enzyme composition of mitochondrial compartments and membranes are shown in Table 3.2: 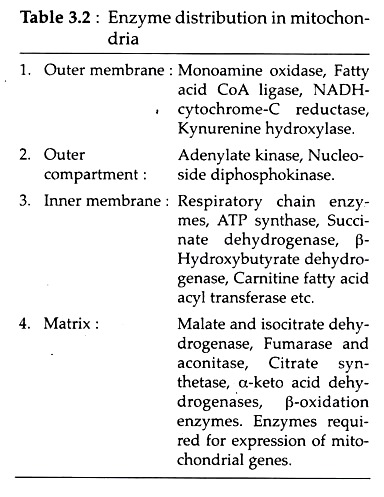 a. Mitochondria function as energy-transducing organelle into which the major degradation products of cell metabolism penetrate and are converted into chemical energy (ATP) that is used in various activities of the cell.

The pro­cess of energy transformation that occur in mitochondria are based on three co­ordinated steps:

(i) Krebs cycle, carried out by a series of soluble enzymes present in the matrix, which produces CO2 by decarboxyla­tion and removes electrons from the metabolites.

(ii) The respiratory chain or electron transport system, which captures the pairs of electrons and transfers them through a series of electron carriers, which finally leads by combination with activated oxygen to the forma­tion of H2O.

(iii) A phosphorylating system, tightly coupled in the respiratory chain, which at three points gives rise to ATP molecules.

b. In the mitochondria of all cells, the outer membrane enzymes mediate the move­ment of free fatty acids into the mito­chondrial matrix. In the matrix, each fatty acid molecule is broken down com­pletely by a cycle of reactions, called P-oxidation that trims two carbons from its carboxyl end, generating one molecule of acetyl-CoA in each turn of cycle. This acetyl-CoA is fed into Krebs cycle for further oxidation.

c. Besides the ATP production, mitochon­dria perform certain biosynthetic or anabolic functions. It contains DNA and the machinery needed for protein syn­thesis. Therefore, it can make different proteins of its own. These proteins include subunits of ATP synthase, por­tions of the reductase and three of the seven subunits in cytochrome oxidase.

The synthesis of haeme (needed for myo­globin, haemoglobin) begins with a mito­chondrial reaction catalyzed by the enzyme delta or d-aminolevulinic acid synthetase. Likewise, some early steps in the conversion of cholesterol to steroid hormones in the adrenal cortex are also catalyzed by mitochondrial enzymes.