The Golgi apparatus, like the endoplas­mic reticulum, is a canalicular system with sacs that performs some important cellular functions like biosynthesis of polysaccha­rides and packaging of cellular products.

In 1898, an Italian biologist, Camillo Golgi dis­covered a dark yellow network located near the nucleus of nerve cells. This network, which was later identified in other cell types, was named the Golgi complex or Golgi body. Since originally these were known to be net­works, they were also called “dictyosomes” (Gr., dictyes = net).

The Golgi complex occur in all cells except the prokaryotic cells and some eukaryotic cells like mature sieve tubes of plants, mature sperm and red blood cells of animals. In animal cells, there usually occurs a single Golgi apparatus however, its num­ber may vary.

In nerve cells it occupies a circum-nuclear position. However, in the cells of higher plants, the Golgi bodies or dictyosomes are usually found scattered through­out the cytoplasm.

The Golgi apparatus is highly pleomor­phic. In some cells it is compact and limited, in others it is reticular. Typically, however, it consists of flattened disk like cisternae with dilated rims and associated vesicles and tubules (Fig. 3.10).

The detailed structures of the basic components of the Golgi apparatus are as follows:

The cisternae are flattened, plate or saucer-like closed compartments. These are arranged in an orderly stack, much like a stack of pancakes. Typically, a Golgi stack contains fewer than eight cisternae. Depending on the cell type, an individual cell may contain from a few to several thousand stacks per cell.

The diameter of cisternae varies from 0.5 to 1.0 nm and in each stack, cisternae are separated by a space of 20 to 30 nm, which may contain rod-like elements or fibres. Each cisterna is bounded by a smooth unit membrane and is curved in a manner resembling a shallow cup.

The cisterna closest to the endoplasmic reticulum (ER) is usually convex and is said to be at the cis face or proximal face or forming face, while the cisterna at the opposite end of the stack is of concave shape and said to be at the trans or distal or maturing face. This polarization is called cis-trans axis of the Golgi apparatus.

Functionally the Golgi complex is also divi­ded into four distinct compartments, the cis, medial, trans cisternal, and the trans Golgi network (TGN). Newly synthesized mem­brane, secretory and lysosomal proteins leave the ER and enter the Golgi through its cis face and then pass across the stack to the trans face (Fig. 3.10). 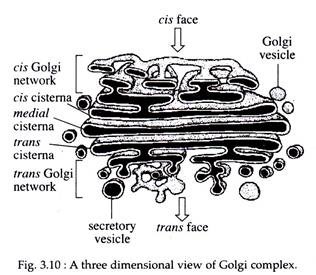 The cis or forming face is characterized by the presence of small transi­tion vesicles or tubules that converge upon the Golgi cisternae, forming a kind of fenes­trated plate.

Vesicles are those that bud from the ER or from the cis and medial cis­ternae of the Golgi complex and are seen in the electron microscope to be covered by a indistinct fuzzy coat that contains a GTP- binding protgin, called ARF (adenosylation ribose factor).

In addition to ARF, the coat vesicles contain a complex of seven distinct, but related coat proteins (COPs). Vesicles coated with COPs are referred to as non-clathrin-coated vesicles.

(b) An inner shell, composed of protein complexes called adaptors.

The TGN or trans-Golgi network is also referred to as GERL (Golgi + smooth ER + lysosome). It is found to be involved in the origin of primary lysosome and melanin granules. It helps in processing, condensing and packaging of secretory material in endocrine and exocrine cells and in lipid metabolism. GERL is also a region of sorting of cellular secretory pro­teins.

The Golgi complex is surrounded by a differentiated region of cytoplasm where ribosomes, glycogen and organelles, such as mitochondria are scarce or absent. This is called zone of exclusion. Coated vesicles are restricted to this region.

Studies carried out on isolated Golgi complex from different plant and animal cells show marked differences in its chemical composition. The Golgi, isolated from rat liver consists of about 60% protein and 40% lipid. In animal cells, Golgi complex contains phospholipids in the form of phosphatidylcholins, whereas that of plant cells contains phosphatidic acid and phosphatidyl- glycerol.

Both animal and plant cells have some carbohydrate components in common, such as glucosamine, galactose, glucose, mannose and fucose, but plants also have some other special sugars.

Different parts of Golgi apparatus show different histochemical staining properties. The cis face of Golgi apparatus stains positively with osmium tetroxide (OsO4), while trans face stains selectively with phosphotungstic acid. Acid phosphatase enzyme is cyto-chemically marked in the GERL region. Transferase enzymes are found to be located in the mem­brane of Golgi, not in the lumen of cisternae.

At the distal face, the cisternae ‘give their all’ to vesicle formation and disappear. Thus, Golgi cister­nae are constantly and rapidly renewed. Individual cisterna, however, may arise from the pre-existing stacks by division or frag­mentation (Fig. 3.12). 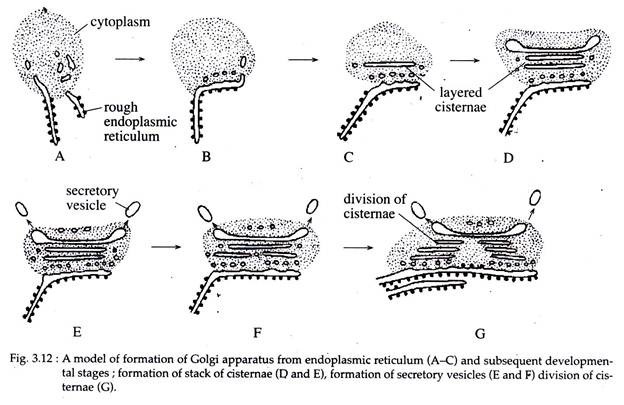 Golgi complex represents a special mem­branous compartment interposed between the ER and the extracellular space, through which there is a continuous traffic of sub­stances. During transportation through different compartments of Golgi, substances are modified, transformed and then are directed to their proper destinations.

The over-all functions of Golgi apparatus are as follows:

a. Synthesis of Glycosphingolipids and Glycoproteins:

The Golgi plays a major role in the glycosidation of lipids and proteins to produce glycosphingolipids and glycopro­teins. Following synthesis on the membrane- bound ribosomes of the RER, the polypeptides reach the Golgi complex, where the ter­minal side chains of galactose, fucose, and sialic acid are added by the corresponding transferases present in the Golgi apparatus.

The Golgi also appears to be involved in the addition of sulfate to the carbohydrate moi­ety of the glycoproteins in cartilage cells.

The main function of Golgi complex is cell secretion, not only of exportable proteins but also of the enzymes present in lysosomes and peroxisomes. Secretion may be continuous where the prod­uct is discharged as soon as it is elaborated, as found in liver cells and plasma cells. In other cells the secretory cycle is discontinu­ous, with storage in secretory or zymogen granules, e.g., pancreas, parotid gland.

In the pancreas, following six steps can be recog­nized.

(i) The Ribosomal Stage:

The synthesis of proteins by polysomes attached to the RER.

The protein is processed and stored within the ER.

The secreted proteins enter the transitional tubules and vesicles that lead to the Golgi complex, in which they fuse with large condensing vacuoles present at the maturing face of the Golgi. This trans­port requires the use of energy (ATP) and is same in all protein-producing cells.

(iv) Concentration of the Secretion:

By the processes of progressive filling, and concentration, the condensing vacu­oles are converted into the zymogen granules that have characteristic electron-opaque content. The conver­sion does not require energy and is probably due to the formation of osmotically inactive aggregates of sulfated peptidoglycans. It involves movement of water from vacuoles to the cytosol.

The previous step culminates with the storage of the secretory product into secretory gra­nules, which are released following appropriate stimulus.

The discharge of secre­tory granules involves its movement towards the apical region and fusion between its membrane and the lumi­nal plasma membrane. Exocytosis requires energy (ATP) and Ca++ and this requirement is related to the pro­cess of fusion-fission of membranes. Thus, Golgi complex acts as a centre of reception, finishing, packaging and dispatch­ing for a variety of cellular products.

To remove the excess membranes from the api­cal region of the cell, it has been suggested that patches of membranes are invaginated from the surface as small vesicles that move back into the Golgi, to be reutilized in the packing of more secretion. Thus a dual func­tion at the cis and trans faces has been postu­lated.

The Golgi complex is involved in the formation of primary lysosomes and glycosylation of many lysosomal enzymes that are mostly glycoprotein in nature.

According to Novikoff, the GERL of the Golgi complex acts as the site for the formation of melanin gra­nules; processing and packaging of secretory materials of many endo and exocrine cells.

Many proteins are synthesized as biologi­cally inactive precursors, which are activated later by the removal of a portion of the polypeptide chain by enzymes present in the Golgi apparatus. For example, the hormone insulin has two precursors – preproinsulin and pro-insulin.

The former is activated in the ER into pro-insulin which is then activated in the Golgi through the removal of the C pep­tide by the converting enzyme and is pack­aged as active hormone insulin within the secretory granules.

Electron micro­scopic studies have showed that acrosomes of spermatozoa are developed from Golgi cisternae and vacuoles.

In addition, Golgi apparatus is also involved in many other cellular functions, such as secretion of materials of primary and secondary cell walls in plants, secretion of cortical granules of a variety of oocytes, formation of yolk and vitelline membrane of growing primary oocytes.