With the help of different genetic techniques like cloning, RNA interference, etc., scientists have deve­loped many transgenic silk moths with desired traits as follows:

(1) Transgenic silk moths (Fig. 3.48) expressing fluorescent proteins can produce large amounts of fluorescence-coloured recombinant silks. Tape-stries, other textiles and lamp shades were produced from the recombinant silks and evaluated for practical use.

(2) By introducing a gene for an acidic peptide into silkworm, scientists developed thin silk. This silk thus produced by transgenic silkworm is thinner than that of the original race. 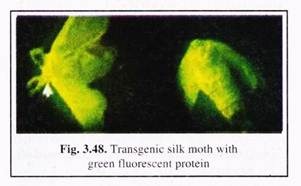 (3) Spider silk produced by transgenic silk moth has more strength and elasticity and is much more stronger than normal silk, so could possibly be used to make sutures, artificial limbs and parachutes.

(4) High yielding silkworm hybrids were deve­loped using the DNA marker technology and then released to farmers of many places like Andhra Pradesh. Karnataka and Tamil Nadu (viz., Swar- nandhra, Hemavathy and Kalpava-tharavu).

(5) Transgenic B. mori was produced by RNA interference (RNAi) for viral resistance against nucleopolyhydra virus BmNPV.

(1) Transgenic mulberry lines with HVA-1 gene for abiotic stress tolerance have been developed. Total area under mulberry cultivation for sericulture in India is about, 79. 065 ha of which 45 to 50% area are prone to abiotic stresses (drought, alkalinity and salinity).

In order to develop suitable mulberry varieties, tolerant to drought and salinity, the DBT launched a programme at University of Delhi South Campus (UDSC), New Delhi.

The silkworm, Bombyx mori, has been used for silk production for centuries but recently also for protein production, as a bioreactor. Since Maeda et al. (1985) reported the production of human a-interferon in silkworm larvae, using recombinant B. mori nucleopolyhedrovirus (BmNPV), the produ­ction of many other proteins has been achieved.

(i) Intercat, a drug principally com­posed of feline interferon, for feline calicivirus infections (commonly known as “cat flu”) was intro­duced in February 1994 as the world’s first antiviral drug for animal use.

(ii) Interdog, a drug principally composed of canine interferon-γ for canine atopic dermatitis, was launched in December 2005. Nowadays, recombinant proteins produced from silkworms are being investigated for commercial purposes.

(1) Characterisation of anti-bacterial proteins in silkworm has led to the discovery of unique insect specific lysozyme (similar to C-type lysozyme and alpha-lactalbumins).

(2) Process for degumming of silk with fungal protease enzyme has been standardised and found economically viable without chemical hazard.

(5) Development of integrated pest management measures against various pest of mulberry and silkworms.