Drying or stifling is the kil­ling of pupa inside the cocoon in order to make them suitable for storage. The cocoons are stifled either by direct method like sun drying or heating or indirect methods like steam or hot air drying. After drying the cocoons can be preserved or stored without any damage to the shell.

The cocoons with dead pupae inside, can either be used for reeling or can be stored up to 6 months before reeling. During storing, cocoons should be protected from insect or fungal attack.

Before using cocoons are sorted on the basis of some physical characteristics like:

The sorted cocoons are then further softened or cooked by hot soft water in order to swell and soften the sericin present in the cocoon without completely dissolving it. Cooking can be done by — (a) open pan (single basin) or (b) three pan (Fig. 3.11). In either case, boiling should not be done for long time and the pH of water is between 6.8-7.4. 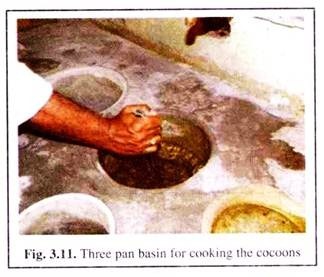 The unreelable, tan­gled mass of silk, found on the outside of cocoons is called floss. Deflossing is the removal of the floss to find out the actual reeling ends of the cocoon that can undergo continuous reeling. In India, deflossing is mostly done by peeling off the floss layer with hand. However, it can be done with simple device like brush or broom made of bamboo root sticks (Fig. 3.12) to save time and labour. 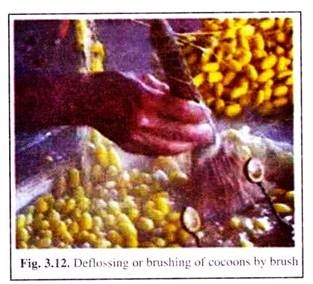 After boiling (cooking) and brush­ing, reeling started. Reeling is the extraction of continuous silk thread of desired thickness from the cocoon without any break. Before reeling, light brushing of the cocoon surface is done to find out the tip of the silk filament.

Then the ends are all separa­ted out and gathered together, this is called end picking (Fig. 3.13). Generally, filaments from multi­ple cocoons are combined together and transferred onto the reeling or spinning machine, which then automatically unravels the cocoons and simultane­ously create a single strand of silk from the cocoons. 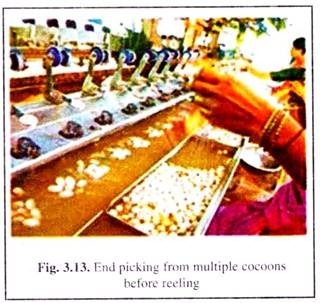 Throughout the reeling process, the cocoons remain in boiling water. When one cocoon gets exhausted, the second one is immediately substituted to reel a continuous and uniform yarn. So the impor­tant steps in reeling are brushing, end picking, casting, binding and traversing.

The individual filament must be inter-wined or twisted and cemented firmly so that the reeled filament does not break during subsequent processing of fabrics. This twist­ing and cementing is done with the help of a special device, called Croissure, which remains attached with the reeling machine.

Croissure helps in twisting and agglutinating the have as well as it squeezes out excess water from the reeled thread to make it dry. Reeling can be done by 3 systems:

In this manually operated system, inferior quality or defective cocoons are reeled. Here cooking and reeling are done in one basin. Following cooking at high temperature, the soften cocoons float in basin.

The reeling ends are then taken out from 4-5 cocoons and twisted around themselves with the help of charkha reel (Fig. 3.14) to make uniform thread. Charkha reeling machine is traditionally home-made and used mainly in villages for small scale silk production. 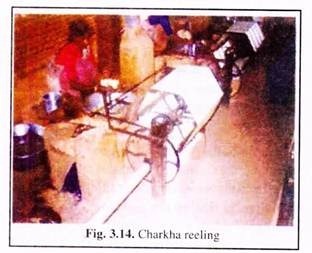 It uses chambon type of simple croissure where threads from two reeling ends are interwinded to form few spirals. So the silk reeled by charkha is of poor quality.

In this system, cooking and reeling are done separately. Boiling water basin is used for cooking while reeling is done in a hot water basin kept near the cooking basin. Cot­tage basin reeling machine uses travellette croissure. It consists of 3 pulleys to enable the thread to inter- wine around itself and also better removal of water and gum spots from the thread (Fig. 3.15 a, b & c).

Cottage basin is also attached with traverse or distributor which is a modified hot rod. After being squeezed by the croissure, the thread is further dried as it passes on the traverse before reaching the reel. So cottage basin yields silk of good quality with uniform thickness. In India, as much as 806 tonnes silk are produced by 4000 cottage basin systems. 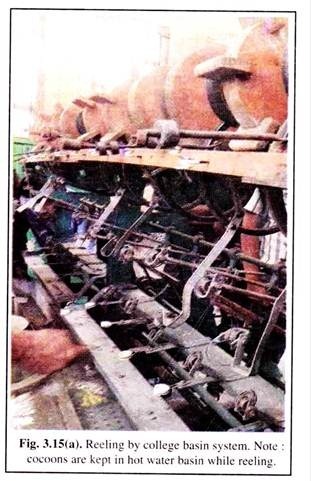 In this power-driven multi- end reeling device, cooking and reeling are done separately. It is a modern device where continuous reeling is done from cocoons of superior quality. The silk produced by filature is also of superior quality because of increased cleanliness and uniformity in thickness of the fibre. However, only 8% of the total silk production in India is contributed by filature.

The raw silk thread, thus produced is rigid, stiff and not soft in touch and also lacks in lustre due to presence of sericin and other impurities on the surface. 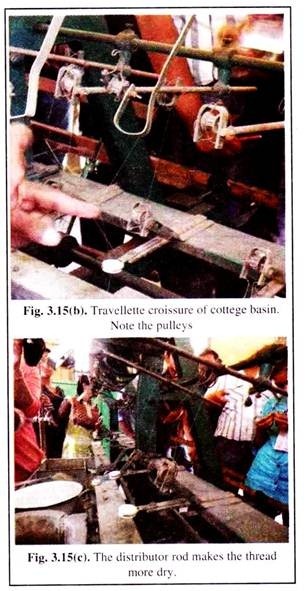 So it needs following treatments:

(A) Degumming of silk:

Degumming is the removal or elimination of sericin and other impurities from raw silk. It is carried out to impart the lustrous and softness on silk. Degumming is generally carried out by following treatments:

(a) Extraction with water:

In this process, silk thread is treated in hot water (100-130°C) for 30 minutes to 4 hours, which can cause degumming of sericin. It is a safer process with minimum degradation to the silk fibre.

Degumming with alkali or acid depends on pH, temper­ature, time of treatment, strength and nature of the reagents used. Alkalis used for degumming include sodium carbonate and bicarbonate, caustic soda, trisodium phosphate etc. Alkali treatment should be done for 30 minutes to 2 hours at a pH > 8.5. In a similar; way acid treatment at pH < 3.0 can eliminate sericin.

Enzymatic digest­ion by proteolytic enzymes like trypsin (pH 8.0), papain (pH 5.2), chymotrypsin, and pepsin at a temperature of 40-50°C were proved to be useful for degumming.

(B) Weighting of silk:

Removal of sericin from the silk fibre results in weight loss of 22-25%. Thus the silk becomes further expensive. Therefore, such weight loss can be compensated by treating the silk with suitable compounds that adds weight or fix  colour to the silk.

Heavy metals like iron, tin, lead zinc, etc. and organic compounds like some tanning substances are used for weighting of silk. Weighting can be done by following steps. First the degummed silk is immersed in an acid solution of tin- tetrachloride.

When the threads absorb the salt to the point of saturation, excess solution is then discarded by centrifugation. The material is then washed thoroughly with cold water to remove the acid. A treatment with hot solution of disodium phosphate then follows.

It allows addition of PO4 to the tin radical bound in the silk. This treatment is referred to as pass. If this pass is allowed for longer duration, the silk will absorb more tin-tetrachloride. Afterwards, the material is again treated with hot solution of Na silicate to increase the weight of silk still further and to fix the tin-salts uniformly.

However, it should be done carefully as the temperature and concentration of silicate bath control the ultimate weighting of the silk in exact amount.

Sometimes silk after being reeled on device like charkha or cottage basin, may suffer from some defects like short length, broken threads, entanglements, hard gum spots, etc. These problems may create wastages of thread during subsequent throwing and twisting. To overcome these defects silk is first reeled on small reels and later is trans­ferred to standard sized hanks (Fig. 3.16). This process is called re-reeling. 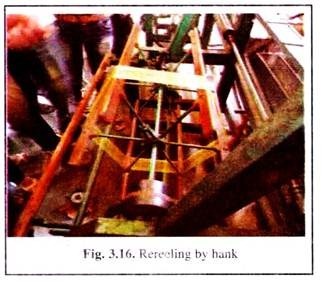 Re-reeled silk hunk is then tied with a coloured silk thread by the two ends. The hunk is then divided into five parts and is laced with a cotton thread. This lacing prevents entangling of the silk in later operation.

The cleaned and laced hunks are then put on a skeining machine to be skeined. During this process, the hunk is twisted and folded upon itself to form a number of tight spirals or skeins (Fig. 3.17). The skeining prevents ruffling and further entanglement of filaments during packing. 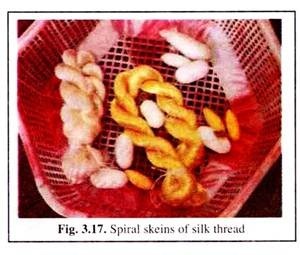 The skeins are then made into books. In a book, eight skeins are placed in horizontal row and five in vertical row. Each book is then tied with separate cotton bands at three different places and wrapped with tissue paper. Books are kept in bales of twenty kg weight. Thus, silk threads are kept in store house as bales. Store house should be free from humidity and air.