In this article we will discuss about the muscles of vertebrates with the help of a suitable diagram.

During development, the mesoderm cells grow between the ectoderm and endoderm and gradually differentiate into three different regions, a dorsal epimere, a middle mesomere, and a lower hypomere. The epimere and hypomere give rise to body muscles, while the mesomere forms excretory and reproductive organs.

The epimere becomes marked off into somites to form segmentally arranged myotomes which give rise to voluntary or striated muscles of the body. The hypomere is unsegmented and forms an outer somatic (parietal) and inner splanchnic (visceral) muscle layers, enclosing the coelom. The splanchnic layer forms smooth or involuntary muscles of the gut and also the cardiac muscles of the heart.

In lower forms (fishes) there is a linear series of muscle segments or myotomes, which are paired striated muscle fibres run longitudinally in the myotomes. Each myotome is sharply bent four times from the dorsal to the ventral side, hence, in section the myotomes appear as concentric bundles. Each myotome lies opposite the point of articulation of two vertebrae and is supplied by a spinal nerve.

The muscles of the head and gill region are concerned with movements of the jaws and closing and opening of gill-apertures (branchial muscles), eyes, and pharynx, they do not show any segmental arrangement and are also of striated type.

In the head region, during embryonic development of fishes as well as higher vertebrates, there are three pairs of somite-like mesodermal blocks called the premandibular, mandibular and hyoid somites. Premandibular somite gives rise to four of the six extrinsic muscles of the eye, i.e., superior, inferior, anterior rectus and inferior oblique muscles. Superior oblique muscle arise from the mandibular somite and posterior or external rectus muscle arise from hyoid somite.

In tetrapoda the primitive metameric condition becomes more and more obscure. This is brought about by splitting of myotomes into various layers, disappearance of myocommata, degeneration of parts of some myotomes, and a displacement and fusion of other parts of myotomes.

In elasmobranchs hollow buds grow out from some myotomes. Their metameric arrangement is lost and they give rise to dorsal (elevates or extends) and ventral muscles (lower or adducts) for moving the paired fins. In tetrapoda these dorsal and ventral muscles differentiate into separate extrinsic and intrinsic muscles, which provide for a greater freedom of movements of limbs on land.

Dermal muscles of the integument generally appear in only amniotes. They are derived from parietal muscles. In snakes dermal muscles move the ventral scales in locomotion. In birds they cause movement of feathers, in mammals they are highly developed, their contractions move the skin in lower mammals, some move the hair. In higher mammals dermal muscles bring about facial expressions.

The bony fishes are the masters of waters at all depths. The body has become shorter and flattened laterally, increasing the vertical axis, so that the length is much smaller in ratio to the depth by which flexibility is reduced. Thus, the body form provides advantages for swimming over the more elongated elasmobranchs.

The fins have changed correspondingly, and very small movement of fins is sufficient to keep the fish at a constant depth or to change its depth. The pectoral fins are placed high up on the body, they prevent rolling and act as brakes in stopping, but they do not act as elevators, and are essentially used for steering. While the pelvic as well as dorsal and aural fins effect stability and assist in maintaining the body upright in water.

Turning is produced either by passing of waves on one side of the body only or by asymmetrical braking with pectoral fins. In turning, the dorsal fin is raised and the symmetrical caudal fin is used to increase the efficiency by which the front part of the body is bent on the tail which acts as a fulcrum, this enables the fish to turn through 180° within a circle having a diameter of the length of the fish.

Rapid forward progress is generally produced by lateral movement of the posterior part of the body and caudal fin. In fast-swimming fishes the tail is crescent-shaped, the caudal peduncle is narrow and the body streamlined for speed.

The slow-moving fishes entirely rely upon their fins for locomotion. Such fishes are usually protected by a heavy integumental covering or by spines or concealing colouration. The heavily armoured sea horses swim principally by movement of the dorsal fin with some assistance by the pectoral fins.

Pipe fishes, puffers and turkey fishes swim by means of fins. Many of the rays swim by means of undulatory movements of the large pectoral fins. Most of the eel-like fishes rely on lateral undulations of the entire body for locomotion as does a water snake. 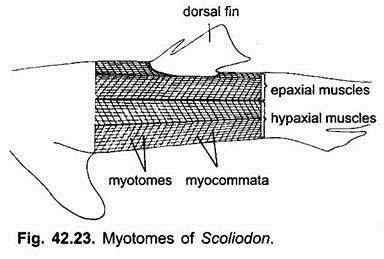 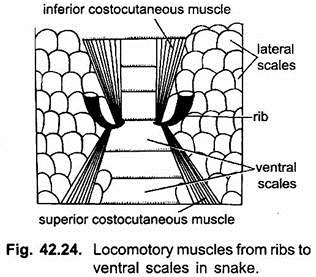 In snakes there are no limbs but locomotion is brought about by lateral muscular undulations of the body and by the large ventral scales, these scales form broad transverse bands. Two pairs of small cost cutaneous parietal muscles pass from the ribs to each ventral scale. These muscles alternately raise and lower the ventral scales.

When the scales are raised they hold the ground and push the body forward. The ground surface should be rough for scales to work, a snake cannot move on a smooth surface.

The track led by a snake in such movement is a wavy line. The body glides along in a series of waves and each part of the body passes along the same track. In soft dust or sand it is evident that the dirt or sand is raised or pushed up on the side opposite the axis of travel so as to form a pivot.

In this type of motion the axis of the body is essentially straight and movement is affected by alternate movement of the ventral scutes and the body itself. An undulatory movement raises the scutes, carries them forward and permits them to become anchored to the ground. Following this, the body slides forward on the part of the ventral skin and the body. The snake appears to move along a straight path without any lateral motion.

It consists of alternate curving and straightening of the body. After the body is drawn up in a series of curves, the tail serves as an anchor and movement is effected by pushing the rest of the body forward until it is straight.

The head and neck are then used as anchors and the remainder of the body is drawn up in a series of curves. This mode of progression is not as rapid as rectilinear motion. It is used when snakes are stalking their prey.

It is used by certain desert snakes. It is essentially a series of lateral looping movements in which only a vertical force is applied and no more than two parts of the body contact the ground at any one time. The resulting tracks are a series of parallel, diagonal, J-shaped marks. The curve of J is made by the head and neck. Its example is sidewinder rattle snake (Crotalus cerastes) of North America.